Muromachi legend tells of a farmer digging for potatoes along the northwest coast of Japan’s main island. In their place, he found flakes of gold in the boggy ground, and Kanazawa (translated as ‘marsh of gold’) was born. Flanked by rivers on two sides and backed by hills, it was a natural site for a fortress and, over the years, Kanazawa flourished into a wealthy castle town.

The castle itself developed a habit of burning down (although a few original buildings survive), but it’s the surrounding gardens you’re here to see. Kenrokuen is a classic strolling garden and lauded as one of the Three Great Gardens of Japan. In the Japanese art of horticulture, there are six attributes that make a garden perfect, and Kenrokuen has them all. 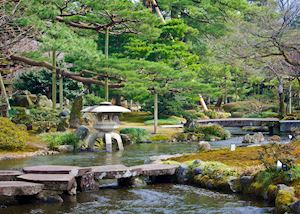 Originally the private garden of the ruling Maeda family and shaped over two centuries, Kenrokuen opened to the public in 1871. The paths, flowerbeds and water features are specifically designed for you to stroll through, discovering bridges, teahouses and flowering trees along the way. The plants have been carefully selected to bring interest throughout the year, from the plum and cherry blossom in spring to the red maple leaves of late December.

While the garden is arguably the highlight of Kanazawa, it’s worth spending a few nights here to explore further. The city’s wealth (gold was indeed panned from the marshlands) has supported a rich artistic and cultural heritage that has led to the nickname ‘mini Kyoto’.

Around 99% of Japanese gold leaf is made in Kanazawa. It’s hard to miss; you’ll find it sprinkled on cakes, added to beauty products and floating on specialist coffee. Most shops that sell bowls, trinket boxes and plates decorated with gold leaf run workshops where you can apply the delicate metal sheets yourself. You can also buy an array of gilded mementos from golf balls to fountain pens.

In-between the gold purveyors, you’ll find workshops and showrooms dedicated to some of the city’s other craft skills, from embroidery to making Kaga fishing flies (which were originally made by warriors of the Kaga Clan). The Ishikawa Prefectural Museum of Traditional Arts and Crafts, in Kenrokuen, exhibits some of the finest works, including polished wooden balls filled with gunpowder — some of the earliest examples of fireworks in the world.

The ever-growing population of wealthy samurai, art patrons and feudal lords brought geisha to the city. Wander through the Chaya district, the only place where geisha still operate outside Kyoto, and you might see one shuffling in their zori (platformed wooden sandals) to an appointment. 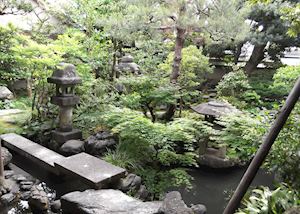 The feudal lords of Kanazawa shaped much of the city, building Nagamachi, a walled district of canals and cobbled streets to house samurai and their families. The area hasn’t changed much since the Edo era. Nomura Samurai House has been restored, and its tatami-mat rooms and neat rock garden are open to the public.

To glimpse a little further into the shadowy samurai world, you can visit Myoryuji Temple (better known as the Ninja Temple). At first glance, it looks like an ordinary 17th-century Buddhist temple, but it was carefully designed to confuse, trap and fool unwanted visitors. Tunnels, secret rooms and hidden floors make it almost impossible to navigate: you’ll need to take a guided tour.

Essentially, Myoryuji is a fortress in disguise, where regional lords planned military operations, although there’s also a shrine for more pious contemplation. It’s rumored that a tunnel leads to Kanazawa Castle, but your guide will most likely respond to any questions about this with a tight-lipped smile.

Within striking distance of Kanazawa is the windswept Noto Peninsula, a mountainous claw of land that reaches into the Sea of Japan. Hire a car to drive along the coastal road and you’ll pass long strips of bronze sand, clusters of monumental rock formations and multi-tiered temples. Continue toward the northern peak to view the Senmaida rice terraces concertinaing across the landscape.

Each season in Japan is quite distinct, bringing a raft of different experiences. Arguably, the gardens are at their best from March to May, when the trees begin to blossom but the city is at its busiest. June and July are considered the rainy season, but showers are inconsistent and sights quiet. August is hot and humid, but temperatures begin to cool again in September, with the winter foliage starting to turn in October. November is the peak month for viewing the bright reds of the maple trees, while December through to early February is crisp and cold, with occasional snow.

Our itineraries will give you suggestions for what is possible when you travel in Kanazawa, and they showcase routes we know work particularly well. Treat them as inspiration, because your trip will be created uniquely by one of our specialists.

Our expert guides to exploring Kanazawa

Written by our specialists from their own experiences of visiting Kanazawa, these guides will help you make the most of your time there. We share both our practical recommendations and the best ways to appreciate Kanazawa at its best.

We’ve selected a range of accommodation options for when you visit Kanazawa. Our choices usually come recommended for their character, facilities and service or location. Our specialists always aim to suggest properties that match your preferences.

Our specialists seek out authentic ways to get to know the places that could feature in your trip. These activities reflect some of the experiences they've most enjoyed while visiting Kanazawa, and which use the best local guides.