The tiny town of Tsumago is an open-air museum of meticulously restored homes and shops, and a visit here offers you a glimpse into what life looked like during the Edo period (1603–1868).

At that time, Tsumago was a prosperous stop at the halfway point on the Nakasendo Highway, which linked Kyoto with Edo (modern-day Tokyo). The highway was a major route for lords, who had to travel to the capital to pay their taxes in person. The town’s economy flourished thanks to the steady traffic of those passing through. 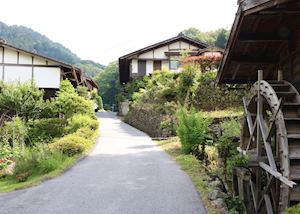 In the late 19th century, the main train line bypassed Tsumago. By the 1960s, many of the town’s buildings had fallen into disrepair. Residents embarked on a major restoration, returning the town to its former glory and banning all hints of modernity.

Today, phone and electrical lines are hidden from sight, cars are banned and, once again, the town thrives from a brisk flow of visitors.

The central road is faced by dark wooden buildings interspersed with carefully sculpted trees and, in the spring, bright patches of purple-pink azaleas. Paper-covered windows are protected by wooden latticework and the wind chimes are delicate blown-glass balls.

Though you can walk the length of the town along the main post road in just half an hour, we suggest lingering to appreciate the detailed rebuilding work. The town is flat, which makes it a good place for slow, easy ambling, despite the largely unpaved streets. Highlights include the museum and the Tsumago-juku Honjin, where you can see a rebuilt version of the inn for government officials. Those with lesser ranks stayed at the nearby waki-honjin.

The town is also home to several holy sites. Impressive mostly for its great age, the Kabuto Kannon Shrine was built about 1180 and dedicated to Minamoto no Yoshinaka, a general who features prominently in the Kamakura period epic, The Tale of the Heike.

Somewhat newer, Kōtoku-ji Temple was built in 1500 and is more visually striking, with white walls and a centuries-old weeping cherry growing out front. Inside, you’ll find an original example of a nightingale floor, an ingenious security feature that creaks loudly when people walk across to deter would-be burglars. 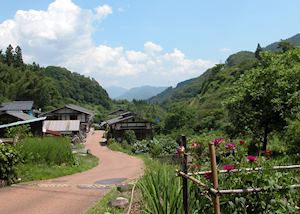 Tsumago anchors one end of the most popular section of a modern walking route that follows the one-time Nakasendo Highway.

You can follow in the footsteps of the feudal lords who walked the path on an easy two-hour walk to Magome, another well-restored post town to the south. The way, which is well maintained and marked in both English and Japanese, bustles with visitors who come to appreciate the forested countryside. To avoid crowds, walk early in the day.

When you’re in Tsumago, it’s easy to identify walkers, who chime gently thanks to the bells attached to their day packs, intended to ward off the brown bears that still roam freely through the mountains.

Like the rest of Japan, Tsumago is at its most vibrant in the spring (March to May) and autumn (September to November), when you can enjoy delicate flowers or rich foliage. If you plan to walk along the highway, the summer months offer good conditions, but you’ll find thinner crowds in May and October.

Our itineraries will give you suggestions for what is possible when you travel in Tsumago, and they showcase routes we know work particularly well. Treat them as inspiration, because your trip will be created uniquely by one of our specialists.

Our expert guides to exploring Tsumago

Written by our specialists from their own experiences of visiting Tsumago, these guides will help you make the most of your time there. We share both our practical recommendations and the best ways to appreciate Tsumago at its best.

We’ve selected a range of accommodation options for when you visit Tsumago. Our choices usually come recommended for their character, facilities and service or location. Our specialists always aim to suggest properties that match your preferences.