This prosperous city is set on the eastern side of Shikoku with the Yoshino River running through the center.

There are plenty of shops, parks and cultural attractions in Tokushima but the city is perhaps best known for its traditional bunraku puppet theater and the annual Awa Odori festival, which takes place during the Obon national holiday in hot and steamy August. 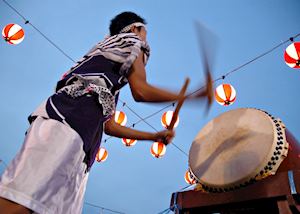 The Awa Odori dances have remained largely secret from the outside world, but this vivacious festival of dance attracts over a million Japanese visitors each year. The distinctive drum beats and flute tunes whip the costumed dancers into a frenzy as they parade through the streets in colorful traditional costumes.

Our expert guides to exploring Tokushima

Written by our specialists from their own experiences of visiting Tokushima, these guides will help you make the most of your time there. We share both our practical recommendations and the best ways to appreciate Tokushima at its best.