A tale of three cities: London, Paris and Rome

Though they are built on ancient foundations, Europe’s great capitals are always evolving. Over the past 2,000 years, London, Paris and Rome have all been hubs of sprawling empires and they remain vital centers of culture and innovation today. You could spend a lifetime discovering the history and attractions of each.

This is not to say that you can’t get a real sense of the city if you only have a couple of days. We asked three of our Europe specialists to each craft an ideal two-day itinerary for their favorite capital, sharing local secrets and a few must-see sights.

Get your bearings with a two-hour guided tour in a vintage Mini Cooper. The agile vehicle can navigate the city’s narrow lanes, taking you places a regular car can’t. Your driver-guide will acquaint you with London’s key neighborhoods, winding backstreets and passing iconic sights such as Big Ben, the Tower of London, Westminster Abbey and Trafalgar Square.

Get dropped off at the sprawling St James’s Park, which offers views of Buckingham Palace and a colony of pelicans — a gift from the Russian Ambassador in the 1600s. From here, afternoon tea at the Ritz Hotel is just a short stroll away. Enjoy dainty bites on a tiered silver tray, as well as an assortment of teas chosen by the resident tea sommelier.

After tea time, take the Tube (London’s metro system) to Marylebone. You can spend the afternoon wandering around the neighborhood’s cobbled streets, ducking in and out of independent boutiques, admiring the genteel Georgian architecture, and even visiting the Sherlock Holmes Museum at 221b Baker Street.

In the evening, indulge in interactive cocktails at Artesian Bar. Set in the imposing Langham Hotel. I love this chic establishment that elevates cocktails from mere drinks into works of performance art. Thus fortified, take your place in the line for Barrafina, a Michelin-starred tapas bar in nearby Soho.

After dinner, you’re well-placed to catch a show in London’s famed West End, or perhaps a musical performance at the renowned Ronnie Scott’s Jazz Club.

Catch the Tube to Old Street Station and wander through Shoreditch, marveling at the eye-catching street art. The area is known for its vibrant and dynamic assortment of guerrilla art, including colorful spray-paint murals and wry public statues. You might even see an original Banksy.

From there, head through Columbia Flower Market to Brick Lane — a cultural melting pot with more art as well as some well-known curry houses. If Indian food doesn’t appeal, nearby is Old Spitalfield Market, where there are plenty of street-food options, or the Hawksmoor steakhouse is a sound bet for a traditional Sunday roast.

In the afternoon, I suggest taking a private tour of St Paul’s Cathedral. If you’re comfortable with steep stairs, climb to the Golden Gallery in order to enjoy the viewing platform at the top of the dome. From here, the panoramas of London are unparalleled.

Nearby, Jamie Oliver’s Barbecoa steak house has excellent views of the cathedral. End the evening with a post-dinner drink at Sky Garden, a 500-foot-high glass-domed garden featuring several bars, a lounge and terrace, atop one of London’s most striking buildings: the ‘Walkie-Talkie’. Admission is free, but you’ll need to book a slot ahead of time to enjoy the views of the city’s skyline.

Begin your day in a properly Parisian manner on a leisurely chocolate-and-pastry-themed walking tour through the Left Bank. Your private guide will introduce you to the artisans who make these delightful confections and explain the history behind them.

After walking off the sugary treats, make way for lunch at a traditional cafe in Saint-Germain-des-Prés. If the weather permits, I’m fond of sitting outside under the classic striped awning at Le Pré Au Clercs, the cafe’s corner location makes it perfect for people watching.

Continue your exploration with a private tour of Île de la Cité and Île Saint-Louis — two islands that form the historical and spiritual heart of Paris. Linger over Notre Dame’s leering gargoyles and flying buttresses, and witness the incredible stained-glass windows of the Sainte-Chapelle. Then move onto the quiet, residential streets of Île Saint-Louis, all the while taking in tales of the area’s storied past.

Head back across town for a behind-the-scenes tour of one of the most recognizable monuments in the world. Your guide will reveal the inner workings and hidden corners of the Eiffel Tower, including the Champ de Mars bunker, once used as a center of military communications, and the control room.

From here, stroll to Le Procope for a fashionably late dinner at the city’s oldest continually run cafe. Founded in 1686, this venerable establishment has served the likes of Benjamin Franklin, Voltaire, Rousseau, and Napoleon Bonaparte, whose hat is displayed in a glass case (allegedly left as collateral against a bar bill he could not pay). The classically French menu includes my personal favorite, coq au vin.

After a refreshing night’s sleep, you can tackle the Louvre. This palace-turned-museum houses one of the largest collections of art in the world, an overwhelming proposition. Even after visiting many times, I still recommend a private guide to steer you past the crowds and pinpoint works that will appeal to your personal taste.

Afterward, replenish yourself with lunch in one of the traditional cafes that fill the cobbled streets of Le Marais. Au Petit Fer à Cheval is a well-respected cafe with a narrow green entrance and a horseshoe-shaped bar. There are only a few sidewalk tables out in front where you can watch the world stroll by.

In the afternoon, take a walking tour of Montmartre, the hill-top quartier where luminaries like Van Gogh, Monet, Renoir, and Picasso once lived. At the top of the hill, pause at the Sacré-Coeur Basilica for a panoramic view of the city.

Enjoy a pre-dinner aperitif at the rooftop bar of Terrass’’ Hotel, which boasts the city’s best view of the Eiffel Tower, especially when it’s lit up at night. Finally, if you’ve planned well ahead, you can adjourn for dinner at the Michelin-starred Le Jules Vernes restaurant on the second platform of the Eiffel Tower itself, or consider an elegant dinner cruise down the Seine instead.

Breakfast as the Romans do: standing at a cafe bar with an espresso or cappuccino. If you’d like something more substantial, add a cornetto, a horn-shaped pastry that’s similar to a croissant with assorted sweet fillings.

Once you’ve fueled up, get an early start on the three major ancient Roman sites: the Forum, Palatine Hill and the Colosseum. A private guide is ideal here to navigate away from the crowds and help you understand the millennia-old ruins, adding the context and history necessary to make sense of the sometimes-skeletal remains.

After a busy morning, slow down for a leisurely lunch at Osteria Barberini. This simple trattoria (restaurant) is tucked into a small backstreet and features a truffle-based menu that attracts a crowd of mostly local office workers.

In the afternoon, indulge all your Roman Holiday fantasies with a guided tour of the city on a classic Vespa. The motorbikes can nimbly navigate Rome’s streets, especially in the narrow lanes and leafy piazzas of Trastevere. Your driver-guide will narrate the route, giving you an overview of the city’s layout and stopping at a few lesser-known sites that most tours miss, like the Roman Spa.

When you’re done, have your driver leave you at Campo de’ Fiori to explore its bustling streets. Home to a lively market by day, the area turns into a boisterous open-air party in the evening as locals and visitors alike flock to the many bars and eateries that line the piazza. I like to have a Negroni and enjoy the appertivo buffet at Bar del Fico. Lively and informal, the restaurant is named after an ancient fig tree that grows in the square, but it’s also a play on words: ‘fico’ is also Italian slang for ‘trendy and cool’.

Wake up early to beat the crowds at the Vatican Museums with a private guide. Notable even in a country known for its artistic heritage, the museums’ collections are enormous and can be overwhelming, even to repeat visitors.

Across the river, Piazza Navona is a graceful cobbled square bounded by baroque palazzi and filled with open-air artists at work. It boasts three fountains, including Bernini’s flamboyant Quattro Fiumi, which depicts four rivers personified as muscular men clustered around an Egyptian obelisk. Lunch at one of the many cafes that line the piazza, and if you choose your table well, you can watch a painter transform a blank canvas into a work of art.

After lunch, spend the afternoon exploring central Rome. You can throw a coin in the Trevi Fountain and know that your wishes are collected to support the city’s various charities. Climb the Spanish Steps to visit the Chiesa della Trinità dei Monti, a 16th-century church, and marvel at the 2,000-year-old Pantheon. The area is also known for chic designer shops.

On your last night, take a terrace seat at the rooftop Aroma Restaurant. Chef Giuseppe Di Iorio’s Michelin-starred menu is rivaled only by the restaurant’s view of the Colosseum.

Read more about trips to Rome, Paris and London 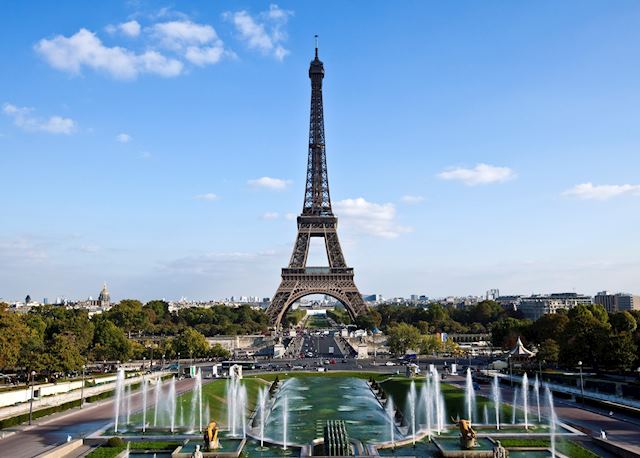