A secluded 18th-century getaway, Auberge de la Source is both rustic and stately. It is set in three quintessentially Norman buildings: two half-timbered farmhouses with beamed ceilings and a tall, red-brick main building with large windows and white wooden shutters.

The hotel is located in peaceful woodlands approximately a 15-minute drive from Honfleur and its individually decorated rooms have a refined but traditional farmhouse style with terracotta tiles, antique furniture, crisp linens and contemporary bathrooms.

Outside, the beautiful hotel grounds wind around fish ponds and fountains while shady alcoves beneath apple trees make an ideal spot for an alfresco breakfast. The hotel also has a well-regarded restaurant serving gourmet regional dishes.

Auberge de la Source is an elegant retreat in the heart of the Normandy countryside offering authentic regional character and a tranquil location. Although rather isolated in the depths of a thick wood, it isn’t too far from Honfleur or the coast. It’s known for its attentive service, gourmet cuisine and inviting garden.

The 15 rooms are all uniquely decorated with oak or terracotta floors, fine fabrics, high ceilings with exposed wooden beams, and large windows that provide views of the charming gardens or the trout and sturgeon ponds. Handcrafted wooden furniture and crisp white bed linen give a refined but rustic appeal. All rooms feature flat-screen televisions, free Wi-Fi and spacious bathrooms with bath or shower. The family rooms either have two bedrooms or a large open-plan room with mezzanine space and can comfortably accommodate two adults and two children.

Auberge de la Source is a welcoming countryside retreat located down a winding, tree-lined path in the heart of the Normandy countryside. While the property is secluded in dense woodland, it is also just a 15-minute drive from vibrant Honfleur with its many restaurants, and approximately an hour and a half from Omaha Beach.

A hearty buffet breakfast is served daily in the chic but rustic restaurant which features a large wood-burning fire, traditional cushions and elegant arrangements of fresh flowers. During the summer, breakfast can be enjoyed in the garden while in winter glowing fires create the perfect atmosphere for evening drinks. Fine dining is an important part of the experience and the four-course, prix fixe (set price) gourmet menu changes daily and features distinctive local produce and typical regional dishes recreated in a contemporary style.

The family rooms either have two bedrooms or a large open-plan room with mezzanine space and can comfortably accommodate two adults and two children.

The hotel offers a range of spa treatments, from facials to body scrubs, inspired by local Normandy produce such as apples or milk. The property also offers hands-on seasonal cooking classes that teach a variety of culinary techniques. Course participants then dine on their freshly prepared meals accompanied by a glass of Champagne.

Our itineraries are there to spark ideas for how you could include a stay at Auberge de la Source as part of your trip. Treat them simply as suggestions, because every aspect of the trip we create for you will be yours to define.

View all accommodation in Honfleur

Honfleur and nearby places 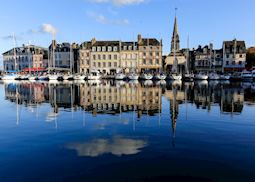