As a student of French literature and the child of oenophiles, I’ve come to love wine. I’d never claim I’m a connoisseur, but I’m an enthusiastic wine drinker with a fondness for full-bodied reds.

Whenever I’m in France, I like to visit vineyards and wine producers, both to learn more and to discover new vintages. Here are three tours I’ve enjoyed on recent trips. Taken together or individually, they provide a gentle introduction to the complex world of French wines.

Visiting a smaller producer in Champagne

For me, one of the best things about visiting France is getting the chance to discover wines that are otherwise unavailable. On my last outing, I spent an afternoon on a wine-tasting jaunt into the Champagne region.

Less than a two-hour drive from Paris, Champagne is at the northern limit of the grape-growing regions. The cool climate and high altitudes make it harder for the berries to ripen but also encourage the high acidity of the resulting wine, essential to the sparkling style for which the region is known.

The low hills are densely planted with vines, filling the entire area allowed by the AOP designation, and producing more than a million bottles of Champagne every day. Some of the biggest producers have names that are synonymous with luxury — Veuve Clicquot and Dom Pérignon — but there are small wineries that produce bottles just as high in quality.

I met Jean Claude in his driveway. A spry octogenarian with grey hair and a neatly trimmed goatee, he welcomed me in imperfect English and rolled open his very pedestrian garage door to reveal racks of Champagne bottles. His family-run domaine (a vineyard that ferments and bottles its own wine) produces just 15,000 bottles a year, a tiny fraction of the bigger houses.

His tasting lacked the polish of the bigger houses — we drank standing in his garage with the bottles and glasses resting on an old oak barrel. But his love of Champagne was palpable as we discussed his techniques. Remarkably, he turns all the bottles by hand during fermentation, a chore that is handled by machinery at larger producers.

Jean Claude’s love translates directly into the bottle. The taste was delicate, unlike anything I’ve ever drunk at home in the States, with small bubbles and notes of honeysuckle and white cherries.

Wine tours and tastings in the Loire Valley

I’ve toured vineyards across France and Italy, and I’ve never encountered anything like the vines growing at the Château de la Grille. They are all strictly pruned with one vertical stalk, which sports two bunches of grapes, and a single horizontal stalk, which carries just eight bunches. AOP regulations are tight all over France, but this is an exceptional level of specificity.

I visited the chateau’s winery on a hot summer day and a distant tractor in the fields kicked up the dry soil into tawny clouds that glowed in the bright sun. The grapes were still green that early in the season, but my guide explained that they were cabernet franc and would develop a ‘black’ skin — actually a deep indigo — as the fruit ripened.

I always like to walk through the fields before a tasting to appreciate the wine’s terroir, and this was no exception. The topsoil was billowing into the sky; called tuffeau, it’s rich with minerals from the porous limestone that makes up the region’s bedrock. It also improves the aging ability of wines grown in the Chinon region, as my host explained.

The limestone was mined to build the many-turreted chateau that gave the vineyard its name, which rises against the sky beyond the vine-filled fields. The busy Renaissance silhouette contrasted sharply with the minimalist blonde-wood and white-wall interior of the tasting room. The windows overlooked the vines but otherwise provided no distraction from the serious business of tasting wine.

The vineyard partners with other local domaines and the tasting includes both whites and rosés, but the star of the show (at least for me) was the property’s own cabernet franc. We sampled three different years and they all shared an intense bouquet and the full body that I prefer. Having walked through the tuffeau, I could really taste the damp mineral notes alongside the strong fruitiness.

In all, I tasted 11 wines and didn’t avail myself of the crachoir (spittoon), which made me grateful for my driver.

The next stop was Château Gaudrelle, a producer in the Vouvray appellation. If the first stop was about the earth and sky, this was about the process of fermentation. The production facility is located in an old limestone quarry, which provides the right conditions for the local chenin blanc grapes to transform into a sparkling white.

Dim and cool, the quarry was a shock after the sun and heat. Even after my eyes had adjusted to the lower lights, the space seemed fathomless, with ranks of unlabelled bottles and oak barrels stretching back into the darkness. The deeply dimpled bottoms of the bottles were covered in dust as they aged slowly in the cave.

My host explained that most of the chateau’s sparkling wine was produced using the méthode traditionnelle, sometimes called the méthode classique, which is the same technique used to create Champagne. A double fermentation, to achieve carbonation, is followed by disgorging, a careful and slow method of removing the lees (yeast precipitate) without losing the bubbles.

Following the tour of the wine cellars, we adjourned to the tasting room to sample the wares, which were wildly different from the earlier reds. These wines were light and lively in the mouth, with a puckering level of acidity and hints of honey and pear.

Creating wine is an art, a science and a passion, but it’s also a business. Having explored the agricultural and production stages of wine, I arrived at Les Caves Duhard in Amboise to learn how the négociant (wine merchant) concludes the process.

I was greeted by Julian, a vivacious young man with a bright smile and a scarf flung carelessly around his neck.

He positioned me under a giant plastic cone fitted with speakers.

Straining to listen, I picked out different sounds — chatter at a bar, a tractor in the fields, the quiet rasp of a bottle turning in its rack.

Julian grinned in approval as he herded me to another part of the store, where he tested my olfactory sense. I sniffed corks to identify scents and called out the answers — lavender, anise, truffles, lilac.

Next was the tasting table, but before I was allowed to sip, Julian explained the proper way to taste wine. I’ve been to many tastings, but I’d never heard the process explained so clearly before. His advice helped me to slow down and enjoy the wine more thoroughly. It also provided a useful structure for understanding the many complexities of wine.

Only then, having honed my senses, did Julian pour. I sampled some well-aged whites, a first for me. I was struck by the way that age deepened the tint into a rich, golden hue, the consequence of oxidation in the barrel Julian explained. He also taught me how to pair the wines I was tasting with different cheese.

Like the wine cellar, the shop was built into a former limestone quarry, this time fronted by huge glass windows that flooded the tasting room with light. It’s situated near the banks of the Loire River in the commune of Amboise, which meant I could walk back to our hotel.

Recently, before a tour of one of France’s most renowned AOP regions, I fortified myself with a lunch at a chateau overlooking the ubiquitous vineyards. The black-clad waiter brought two menus: a single sheet of paper, folded in half, with the food options printed upon it, and a heavy tome that thumped when he laid it on the table, detailing the extensive contents of the cellars.

The prestigious appellation encompasses only this small commune (village) and parts of a few others surrounding it. That limited production area, combined with high demand and labour-intensive techniques, means that bottles can be hard to come by outside France.

I’m always struck by how inhospitable the region seems. Like the rest of Provence, Châteauneuf-du-Pape enjoys hot and sunny skies most of the year and the notorious mistral winds blow irregularly through the area, dry and whistling. What’s more, the appellation forbids irrigation, so viticulturists conserve water using age-old techniques.

Many of the farmers cover their fields in a thick layer of galets — smooth fist-sized pebbles that range from creamy white to warm gold. The wind-stunted vines snake up from the otherwise barren field of stones, a surreal sight after the lusher climes of the Loire Valley.

At Château Mont-Redon, our host explained that the stones play a dual role. First, they act as mulch and prevent the winds from whisking away the limited moisture in the soil. Second, they soak up the sun during the day and radiate the heat back at night, making the grapes ripen more quickly.

The lunar landscape and techniques may seem strange, but I couldn’t argue with the results. We sampled three vintages — the mouthfeel was like liquid silk, heavy and smooth, and I can only describe the taste as ‘otherworldly’.

Thanks to the demand, all the arable land within the small appellation is under cultivation, and we drove through successive fields of grapes to reach our next destination. Domaine de Mourchon is outside the official Châteauneuf-du-Pape range and thus doesn’t bear the coveted label. Instead, it’s classified as Séguret, one of just a handful of Côtes du Rhône villages that are considered distinct enough to include their names on the label.

The domaine was founded by a ‘retired’ Scottish couple, Walter and Ronnie McKinlay, when they fell in love with wines from southern Côtes du Rhône and decided to buy a vineyard here. It’s not hard to see why when you gaze over the fields. Vines grow in tidy terraced rows up the side of Mont Ventoux’s foothills, basking in the buttery Provençal light.

The domaine produces a white and a rosé, but the reds rivalled those of the Châteauneuf-du-Pape appellation — beautifully balanced, with lush berry notes and hints of resinous herbs.

Start planning your trip to France 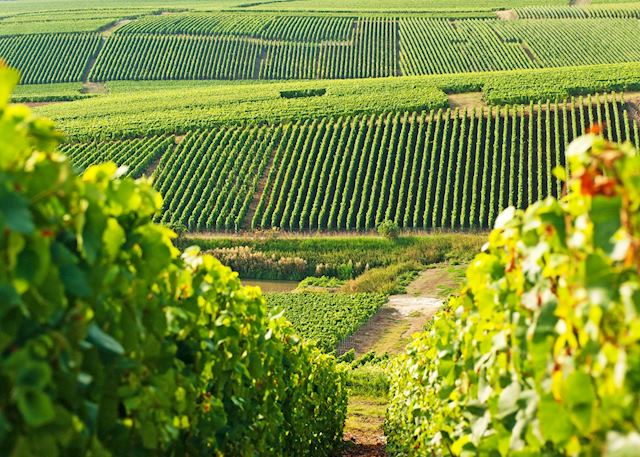