The Tadoba-Andhari Tiger Reserve, situated in the Chandrapur District of Maharashtra, spans over 625 square kilometers. 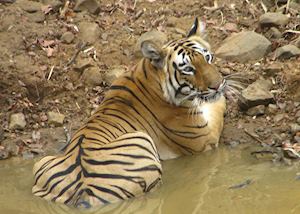 Although Tadoba has a healthy population of tigers, they are not used to human presence and slow to show themselves. It is worth spending several days here to have a chance to see them. The park is famous for many other great mammals such as leopard, sloth bear, gaur, wild dog, striped hyena, jungle cat and chausingha (the four-horned antelope), not to mention a rich birdlife. Tadoba National Park is for those who want to sample a little-known, little-visited, tourist-free national park and tiger reserve.