Though Bagan had been a major city since King Pyinbya moved the capital here in 874 AD, it was not until the Bamar King Anawrahta converted to Theravada Buddhism in the mid 11th century that the 'golden period' of Pagan commenced.

In 1057 he overwhelmed the Mon capital of Thaton, capturing over 30,000 prisoners, including the Mon royal family. Yet the influence of the Mons was key to the development of Bagan. During Anawrahta's 33 year reign the Mon language became the official Royal language instead of Pali and Sanskrit, and Theravada Buddhism became the state religion. It was in honor of this new-found religious fervor that Anawrahta ordered temples to be erected, the most notable being the Shwezigon Pagoda. It was however under the reign of King Kyanzittha (1084-1113) that temple construction reached new heights, perhaps the most famous being the Ananda with its 170 ft golden hti or stupa. 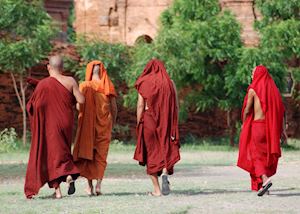 By the start of the 13th century Bagan had become known as the 'city of four million pagodas' and a complex system of irrigation supported extensive rice cultivation on the otherwise arid plain on which Bagan sits. The end of Bagan's dominance was heralded when King Narathihapate assassinated an ambassador of Kublai Khan bringing down on himself and his people the considerable wrath of the Mongol Empire in 1287.

Over the next four of five centuries Bagan was left to the elements and considered by many as a region haunted by nats (spirits). The earthquake in 1975 destroyed almost half of the pagodas — although what remains today may be just a glimpse of Bagan at the height of its powers, it is without a doubt a remarkable footprint of a once glorious period in Myanmar's history.

Our itineraries will give you suggestions for what is possible when you travel in Bagan, and they showcase routes we know work particularly well. Treat them as inspiration, because your trip will be created uniquely by one of our specialists.

We’ve selected a range of accommodation options for when you visit Bagan. Our choices usually come recommended for their character, facilities and service or location. Our specialists always aim to suggest properties that match your preferences.

Our specialists seek out authentic ways to get to know the places that could feature in your trip. These activities reflect some of the experiences they've most enjoyed while visiting Bagan, and which use the best local guides.