Hawke's Bay is a large and diverse province, famous for its fine wines, sunshine and pristine coastline. Napier is the principal center, and has a fine coastal position on the sweeping bay.

The town is most famous for its architecture, rebuilt after an earthquake in 1931 in Art Deco style, characterized by the use of symbols of the machine, power, speed, flight, freedom, liberation and newness — in short, by symbols which represent the optimism and confidence of the 1920s and 1930s. 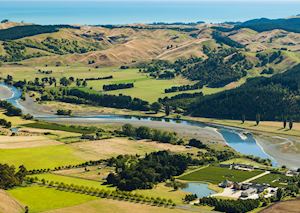 Also within the Hawke's Bay region are the interesting towns of Hastings and Havelock North, the former a center for agriculture and Spanish Mission-style architecture, and the latter known for its gardens, backed against the impressive Te Mata Peak.