Much of the game is found near the river, with herds of elephant and buffalo descending the dusty banks to drink. Large crocodiles laze on sandbanks and at dusk hundreds of hippo leave their pools and lumber up the banks to graze. Impala and puku are common and the beautiful Thornicroft’s giraffe can be seen in the dappled forests. Cookson’s wildebeest, Crawshay’s zebra, waterbuck, bushbuck, grysbok and oribi are also found. Predators abound with lion and spotted hyena, while the leopard are always a highlight.

Finally, there are over 400 species of bird with highlights including flocks of crowned cranes, colonies of carmine bee-eaters and a breeding colony of yellow-billed stork. 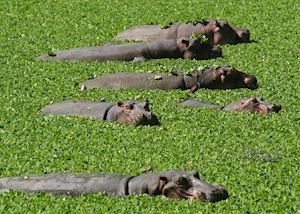 In November the Luangwa receives its first rains. Short downpours followed by warm sunshine lead to an explosion of vegetation. Grass grows to six feet tall, trees flower, pans fill and rivers burst their banks. Animals take advantage of the abundant food to give birth to young, and flocks of migrant birds arrive. It’s a time of plenty, when the parks are colorful and bursting with life.