The former capital, Punakha was built as a defensive stronghold in the 17th century.

The country's most idyllic dzong is situated at the confluence of two rivers. Breathtaking from outside and rewarding inside with rich wall paintings and friendly local monks.

Reached by crossing the 3,116 meter Dochu La, the fertile valley floor is the winter home of the country’s largest monk body and produces a wide variety of fruits and vegetables which you won’t see anywhere else in the country.

Chimi Lhakhang, the temple of the Divine Madman 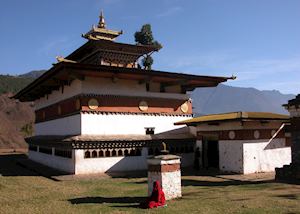 A gentle stroll across rice paddies and through a small settlement of painted houses brings you to Chimi Lhakhang, the temple of the Divine Madman, one of Bhutan’s favorite — and most unorthodox — saints.

Our itineraries will give you suggestions for what is possible when you travel in Punakha, and they showcase routes we know work particularly well. Treat them as inspiration, because your trip will be created uniquely by one of our specialists.

We’ve selected a range of accommodation options for when you visit Punakha. Our choices usually come recommended for their character, facilities and service or location. Our specialists always aim to suggest properties that match your preferences.

Our specialists seek out authentic ways to get to know the places that could feature in your trip. These activities reflect some of the experiences they've most enjoyed while visiting Punakha, and which use the best local guides.