There are many luxurious hotels on Mauritius and we have carefully chosen our favorites.

These hotels are all set in extensive gardens above quiet beaches, with good staff, delicious food and a relaxed and peaceful environment.

Creole is the everyday language buy many Rodriguans also speak French. English has been neglected, with the result that young Rodriguans' aspirations to work in government services (for which a credit in English is compulsory) are thwarted. Efforts are being made to improve the standard of English teaching in schools. Away from the tourist hotels few people will speak English and you will need to speak French.

The cuisine in Mauritius includes a variety of flavors and aromas inherited from the different periods of the country's history. Culinary traditions from France, India, China and Africa, the best-known and appreciated cuisines in the world, have been passed on through generations.

Depending on the region, rice or a variety of flat bread called chapatis or roti called farata by the local people, is eaten with curries. The extensive use of spices like saffron, cinnamon, cardamom, and cloves and herbs like thyme basil and curry leaves are the common ingredients that provide some powerful, yet subtle, flavors.

Dal, a variety of lentil soups, are many and varied according to which type of lentil is used; vegetables, beans and pickles accompany the dishes. Dholl puri and roti, originally an Indian delicacy, have become the fish and chips of Mauritians.

Tipping in restaurants is usually left to your discretion, although you should check that a service charge is not going to be added to the bill before you dish out tips. In restaurants where no service charge is added, you could leave 5% to 10% of the bill, according to your satisfaction with the service. In basic eateries tipping is not expected.

Porters should be tipped accordingly, although hotel porters do not linger waiting for a tip. Rs20-40 is about right for airport porters. Taxi drivers don't expect tips but they are gratefully received.

The currency of Mauritius is the Mauritian Rupee. You can buy the Rupee on arrival in Mauritius at the airport and it is very useful for shopping. All hotels also accept payment by credit cards.

Conservative casual wear is generally acceptable everywhere, but revealing clothes should be avoided since they may cause offense, particularly in towns and villages. More than half the population is Hindu, so respect their traditions and religion.

Dress appropriately when visiting religious shrines (no shorts, mini-skirts, etc.) and remove shoes when entering mosques and temples. Do not take pictures of people without asking permission.

When to go to Mauritius

You'll find temperature and rainfall information, together with a month-by-month guide on visiting, on our guide for when to go to Mauritius. 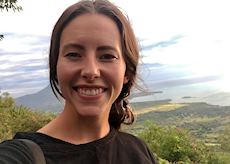