The Hotel Alfonso XIII is a landmark building featuring an ornate neo-Moorish design. It was commissioned by King Alfonso XIII to play host to visiting dignitaries during Seville’s 1929 Ibero-American Exposition. Well located for exploring the city, the hotel is just a five-minute walk from Seville’s royal palace, Real Alcázar and cathedral, and a ten-minute walk to Parque de María Luisa and site of the 1929 exposition.

The grand marble lobby is clad with intricately patterned blue and yellow tiles. Its arched colonnades lead to an interior courtyard surrounded by an elegant gallery. Here, you’ll find an Art- Deco-style cocktail bar harking back to the hotel’s heyday, as well as an upscale restaurant and a tapas bar overseen by a Michelin-starred chef.

Each of the hotel’s 151 rooms has been elegantly styled, maintaining plenty of the building’s historic grandeur while offering modern amenities. The bathrooms feature more of the elaborate tiling for which the hotel is so notable.

There’s an outdoor pool, open during the summer months, and a small fitness pavilion with a sauna.

Undoubtedly one of Spain’s most renowned hotels, the Hotel Alfonso XIII is a landmark in its own right. We love the elegant atmosphere, and the high-quality service lives up to the grandeur of the property.

Just around the corner from the grand Real Alcázar, the hotel is in an excellent location for exploring the city. In five minutes you can walk to the Alcázar or Seville’s grand Gothic cathedral with its Moorish tower, the Giralda. In just over ten minutes you can reach Parque de María Luisa, and site of the 1929 Exposition for which the hotel was constructed.

The hotel offers a small fitness area as well as a sauna and outdoor pool.

Our itineraries are there to spark ideas for how you could include a stay at Hotel Alfonso XIII as part of your trip. Treat them simply as suggestions, because every aspect of the trip we create for you will be yours to define.

View all accommodation in Seville

Seville and nearby places 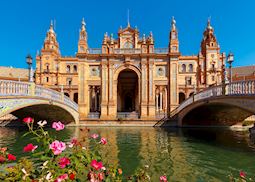