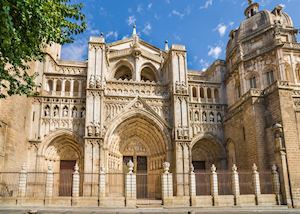 The mosque is small and square, with a brick exterior that sports triple-arched entrances on three sides. Four columns divide the interior into nine vaulted bays, each marked by its own pattern created by the criss-crossing ribs in the ceilings. The geometric designs echo the motifs found in traditional Islamic tiles.

Spain was home to one of the world’s largest Jewish populations until the Alhambra Decree in 1492, when they were expelled. Toledo’s Sephardic Museum helps to uncover and preserve that culture with exhibits that explore Judaism’s history through archaeological finds and ceremonial objects.

We suggest visiting from September to November or March to May, when you’ll likely enjoy dry, warm days that average around 15°C (59°F). In winter (December to February), you’ll have cooler temperatures and the occasional shower, but the sites are quieter. July and August bring hot days and thick crowds. Additionally, many Madrileños leave the city for their own summer trips and some restaurants and shops close.

This sample itinerary will give you an idea of what is possible when you travel in Toledo, and showcases routes we know work particularly well. Treat this as inspiration, because your trip will be created uniquely by one of our specialists.