Tanzania is a vast country and the two parks in the west, Katavi and Mahale are a long way from any other parks in Tanzania.

Access is by flying in light aircraft, usually from Northern Tanzania and flights usually take around four hours or more.

Because of the remoteness of the camps, operating costs are high and these are some of the most expensive parks to visit in Tanzania. However, those that do explore Katavi and Mahale will find some of the most spectacular scenery and wildlife that there is on the entire African continent.

Katavi National Park is the wildest reserve in East Africa. It is best visited in the dry season when herds of up to 3,000 buffalo congregate on the plains. Lion and leopard are never far away. Cutting through the plains the Katasunga River has hippo pods of up to 600 and crocodiles of around 14 feet dug into damp mudholes in the river banks. 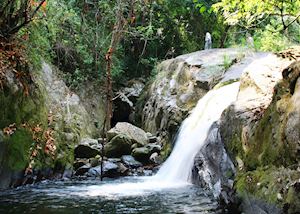 The Mahale Mountains are on the shores of Lake Tanganyika and are Africa’s best place to track chimpanzees with a population of over 1,000 living in the mountains. The one camp in this area is perched between the dense rainforest and an idyllic sandy beach.

Visitors to Western Tanzania usually spend a week in the area, combining three days in Katavi with four in Mahale or vice versa, flying from one park to another.

Places to visit in Western Tanzania

Featuring heavily on our experiences of visiting Western Tanzania, these selected places are destinations that also prove consistently popular with our travelers. Our specialists can help you choose how to include them in your wider trip, based on your preferences.

This sample itinerary will give you an idea of what is possible when you travel in Western Tanzania, and showcases routes we know work particularly well. Treat this as inspiration, because your trip will be created uniquely by one of our specialists.

Map view Places in and around Western Tanzania

Places in and around Western Tanzania

We’ve selected a range of accommodation options for when you visit Western Tanzania. Our choices usually come recommended for their character, facilities and service or location. Our specialists always aim to suggest properties that match your preferences.