The mention of Thailand conjures up images of palm-edged pristine sands, karst studded bays, tranquil temples and ancient cultures. But what makes Thailand such an alluring destination?

Our travel specialists handpick five creative ways to experience Thailand’s culture, traditions and natural wonders. For instance, you could explore the backstreets of Bangkok, hike into one of the oldest rainforests on earth, or practise traditional batik painting in the quiet Phang Nga Bay, of Koh Yao Noi island. Each of these experiences can be easily combined into a trip across the country.

Discover Bangkok off the beaten track

A quintessential Asian megacity, Bangkok is a clash of sleek office buildings, ancient temples and streets filled with the scent of barbecued skewers and freshly prepared curries. It’s a hub for visitors, whom you’ll mostly see touring the kaleidoscopic City Palace and wandering down the t-shirt stalls of Koh San Road.

On my most recent trip, I joined Paul, a Bangkok resident, who showed me another side to the city. We began by crossing the Chao Phraya River which splits the cosmopolis and started to explore its quiet western banks. Immediately you notice a difference: more greenery, low-rise buildings and a distinct lack of fellow adventurers.

On this tour, which lasts around a morning or an afternoon, you’ll stroll through the Spanish and Muslim quarters, dipping into churches and Sri Lankan temples. We stopped to admire the intricately carved doors of a 200-year-old mosque. Paul explained how certain communities came to live here, and how once this was the heart of the city, before the larger financial districts popped up across the river.

In the Portuguese quarter, we stopped at a small house for a pastel de feijão, a light, fluffy pastry covered in icing sugar. Among the faded ochre walls of the Portuguese architecture, I felt, momentarily, like I was in Europe. However, a few paces later we passed an old stilted wooden house that looked like it was slowly sinking into the river. Sitting on the porch was an elderly man who waved us over, eager to find out where I was from and why I’d veered into this area.

As my tour came to an end, we passed a mosque which pulsed with celebratory music (‘a wedding’, grinned Paul). Some of the guests had spilled outside and when they spotted us, ushered us in for a plate of food. I asked Paul if this was a rare occasion. ‘No,’ he said, smiling, ‘this is community life in Bangkok’.

Take a five-hour scenic train journey on a commuter train from Bangkok to Sukhothai.

Wherever I am in the world, there always seems to be a Thai restaurant nearby. The country’s internationally popular cuisine is arguably its biggest pull for visitors, as there’s nothing quite like tasting a Thai red curry or tom am soup in the country of its birth.

There are opportunities to refine your own Thai cooking skills right across the country, but to get really hands-on, I suggest making your own noodles in Sukhothai. The city tends to hit the guidebooks due to its historical park, a sprawl of ruined temples and monasteries where the kingdom of Siam was originally founded. Across Thailand, it’s also a city synonymous with a hearty pork noodle dish.

Learning the art of the noodle

In a tiny restaurant on the outskirts of the historical park, you’ll be shown the fine art of making Sukhothai noodles, which have a chewier, thicker texture than traditional noodles. The dish, like all Thai cuisine, aims for the ultimate balance of sweet, salty, sour and bitter tastes, and you’ll add barbecued pork, limes, palm sugar and chilli in perfect unison. If you’re vegetarian, tofu is used instead.

When the dish is ready, you’ll sit down to try your creation, which is served with crushed peanuts, more lime and crunchy green beans — and a rewarding glass of iced coffee or plum soda.

Catch a short flight from Bangkok to Chiang Rai.

You’ll see pictures of elephants in the airport and on beer bottles, currency and almost every type of souvenir. Elephants are an important symbol to the Thai people and encountering them has become a classic Thai experience.

In a way, I find that frustrating, as there are lots of wrong ways to do it. But, there are also some really worthwhile ways to support these gentle, inquisitive creatures. For me, the best way to see elephants is at the Elephant Valley Project. Set in a vast tract of jungle on the outskirts of Chiang Rai, a small handful of ex-logging and circus elephants live with their mahouts and a team of enthusiastic volunteers.

On arrival at the sanctuary

When I arrived, I was almost immediately following one of the volunteers into the jungle. We soon spotted an elephant, casually running its trunk over a tree looking for snacks. We kept our distance, which is especially important here — the elephants are slowly being trained to reconnect with their natural environment so that, eventually, they can be released into the wild.

At feeding time, there’s the opportunity to see them up close, and you can help staff pile up giant pineapples (a treat, stamped on once then eaten whole) and leaves into a buffet. You’ll also have the opportunity to sit and lunch with the staff, who are keen to share stories of each elephant’s development, particularly when one has just mastered a new skill that brings them closer to becoming ready for release.

You can visit for the day from Chiang Rai, or even spend the night on site. It’s a very basic experience, with a simple room and shared bathroom facilities in a converted farmhouse, but it was quite something to listen to the elephants’ morning trumpeting as I woke.

From Chiang Rai it’s a short flight to Phuket, followed by a two and a half hour’s drive to Khao Sok National Park.

Finding a patch of untouched jungle to hike through is a timeless Thai experience for me, especially when you’re pushing past thick vegetation toward a mountain viewpoint or a hidden waterfall. In Khao Sok National Park you can take things further and stay in a floating lodge on Cheow Larn Lake. The watery setting allows you to explore by longtail boat deep into the surrounding forest.

It’s just you and your guide, so the jungle treks can be tailored, ranging from an hour’s ramble to a lengthy day-long trail. I recommend opting for an early start — it’s so quiet on the lake as the boat coasts along, the occasional hornbill flying above (pack your binoculars). As the jungle awakens, monkeys begin to scrabble around in the treetops and if you’re incredibly lucky, you might see an elephant come to take a drink.

Spending time with the local community

The guides come from the local area. As you explore, they’ll point out hidden creatures or plants of interest. Every time there was the slightest noise my guide pricked his ears, looking out for the source — which, on one occasion, was a particularly fluffy tarantula.

Part of the experience also includes lunch cooked at a family home — a small cluster of stilted house communities are hidden in the jungle. The villagers take it in turns to host, ensuring that everyone gets the chance to gain income from visitors, and for me, it made for an ideal way to end a morning’s walk.

Drive back to Phuket and catch a 30-minute speedboat across to Koh Yao Noi.

I spend a lot of my time arguing that there’s more to Thailand than its beaches — but I wouldn’t plan a trip without a beach stay. There’s a slip of sand to suit everyone, from secluded coves to restaurant-lined promenades. It can be tempting to arrive and simply flop, but Thailand’s coastal and island communities are just as fascinating to visit as their inland counterparts — particularly because no one else does.

Sitting in the middle of Phang Nga Bay, Koh Yao Noi is one of Thailand’s less developed islands, with a handful of hotels tucked into the occasional palm-edged bay. The beaches are photogenic specimens, but I’m suggesting you stay here for its morning island tour.

Getting creative on the waterfront

You’ll start at the waterfront, where a women’s cooperative practise traditional batik painting. On my visit, I was sat down with my own board and paintbrush and shown the correct technique. (Your artistic creations will appear at your hotel later in your stay, or can be posted home). Then, it’s a hop into a mini pick-up truck — Koh Yao Noi’s main form of local transport — for a drive around the island.

My guide was eager to point out that the tour is pretty flexible from hereon, depending on the season and your interests. We stopped at a coconut plantation to meet a husband-and-wife team who showed us around and cut me a fresh nut straight from the tree to drink.

It’s a speedboat journey back to Phuket. With its international airport, you can fly home from there. Or, of course, extend your trip: there are connections to Cambodia, Vietnam and Malaysia. 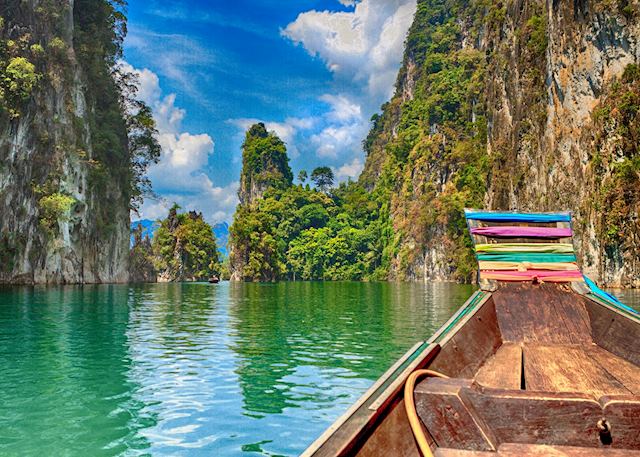