The most compelling tales from our travels are rarely about seeing an iconic site or experiencing something many have done before. They’re often about the unexpected, uncovering something new about a destination, doing things you’d never usually consider or knew were even possible.

This year, our resolution is to step outside our comfort zone. Below, we suggest ways in which you can try something different on your travels, whether learning to wield a sword like a Japanese samurai, floating over Chile’s Atacama Desert at sunrise in a hot-air balloon or camping out at a 9th-century Cambodian temple. 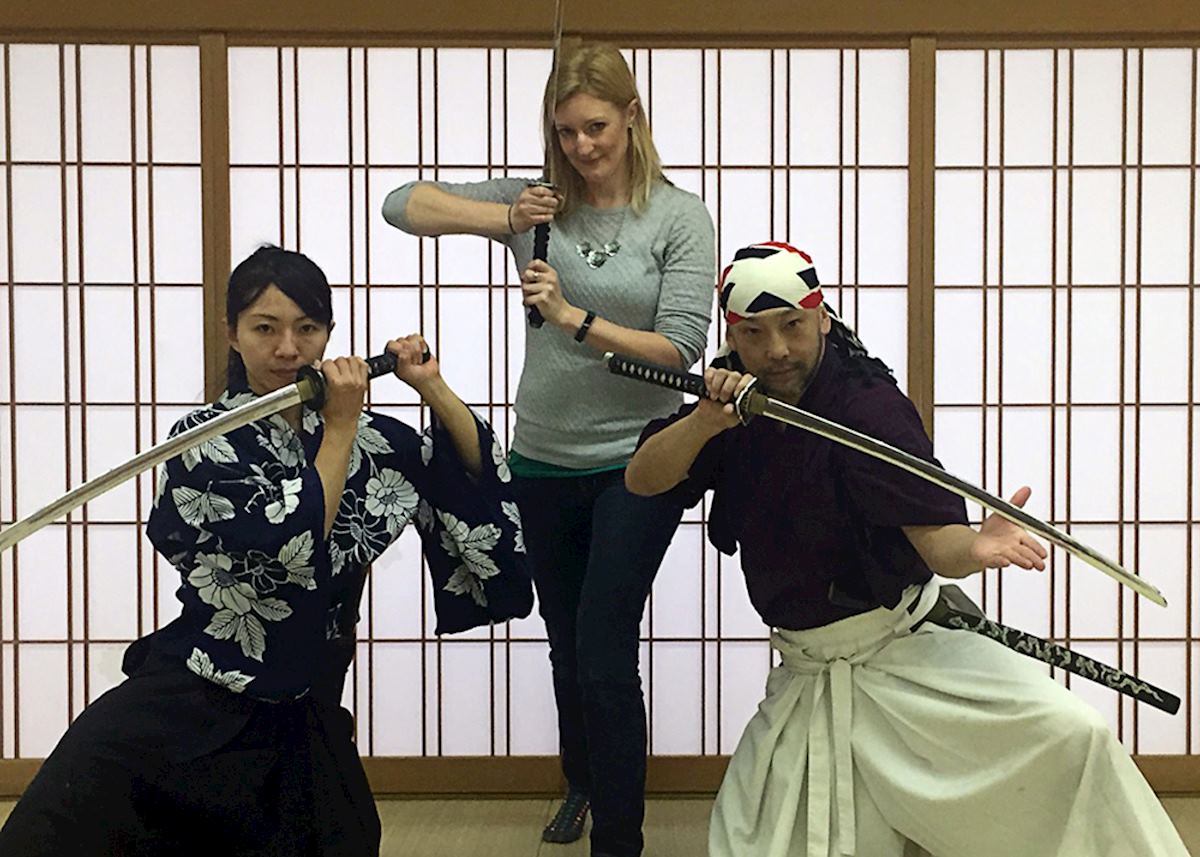 I never thought I’d hold a sword, but on a recent trip to Tokyo, I learned to wield one like a professional. Japan has a rich history of martial arts, leading back to the samurai: military nobility who developed martial arts for use on the battlefield.

Samurai are now more likely to be seen in films and TV shows. Tetsuro Shimaguchi, an expert in samurai sword fighting, has choreographed scenes in a number of films, including 2003’s Kill Bill: Volume One. He now runs a Kill Bill experience to introduce novices to the art of sword fighting.

Walking into the large tatami room, I was met by three samurai kimono-clad professionals: Tetsuro and his team. We started with some basic techniques including drawing and swinging the sword. Once I got the hang of these, we moved onto more advanced moves. Finally, the skills I had learned were put together in a choreographed fight scene. Along the way, I was given an insight into the director’s perspective, being told when to pause for a close up and when the wind machine would rustle my kimono. 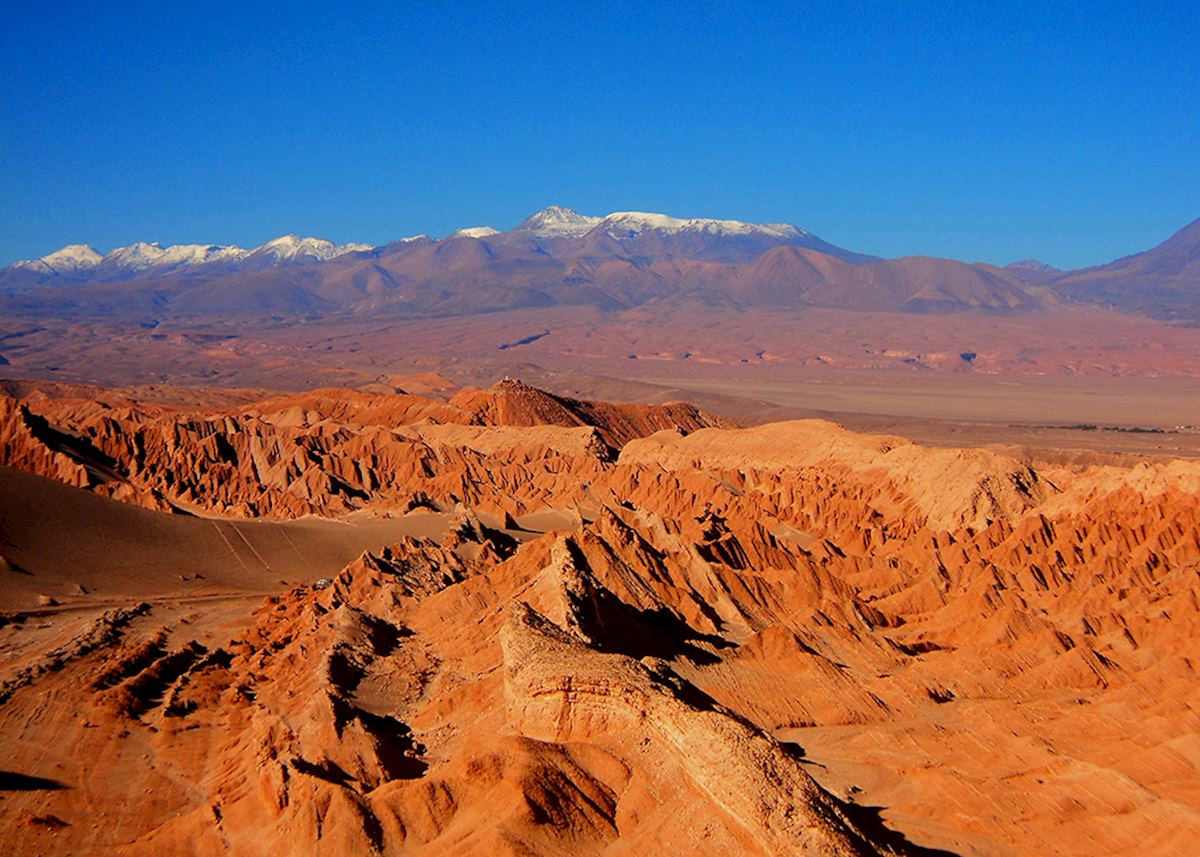 The Atacama Desert may be the most arid place on Earth, but it was crisply cold when I met my fellow passengers at the balloon launch site around 6am. There was a frisson of anticipation in the air as everyone sipped coffee and basked in the heat given off by the burner inflating the envelope (the fabric bag). I got chatting to a mother and daughter who were from San Pedro de Atacama, the main town nearby, and were taking the trip to celebrate Mum’s birthday.

As we lifted into the air, the roar of the burner subsided. There was no wind, and no one spoke. Everyone, it seemed, was transfixed, craning over the sides of the wicker basket (which came up to shoulder height) and looking down on an endless-seeming expanse of tawny rock and dunes.

From this vantage point, you could see the desert’s scale and topography in a way that was impossible to take in at ground level. The geology of the Valley of the Moon, which had dwarfed me when I hiked there the day before, now appeared like the spiked spine of some titanic prehistoric creature. Its serrated formations glowed burnt ochre, then burnished gold.

We drifted with the wind, glimpsing more features: salt flats, a field of smoking fumaroles, distant cordilleras and the sides of the great volcano Licancabur, seen as godlike by indigenous people.

Flying over the Lewa Wildlife Conservancy in a biplane, Laikipia, Kenya

Situated in the heart of Kenya, the Lewa Wildlife Conservancy forms part of the Laikipia Plateau. Across the dry, open grass plains, valleys and escarpments, black rhino roam alongside elephant, giraffe, leopard and the rare Grevy’s zebra.

While safaris take up most of your time, staying at Lewa Wilderness Trails gives you the unusual opportunity to fly in an open cockpit biplane — a replica of those used in the 1930s. The owner and pilot of this bright yellow aircraft is Will Craig, whose family have owned the land since 1922 and set up the conservancy and lodge.

On my last visit, Will asked if I’d like to join him for a scenic flight and I jumped at the chance. Donning traditional flying goggles, cap and jacket, I boarded the front cockpit (which seats two) and Will got into the back. The engine lurched to life with a throaty roar and soon we were gliding over the landscape, the familiar jagged outline of Mount Kenya looming in the distance and casting long shadows over the ground.

Throughout the half-hour or hour-long flight you can communicate with Will using a headset. He’ll point out wildlife and interesting features of the land below. Flying at a relatively low altitude through the valleys, the flight was an exhilarating, novel way of experiencing the conservancy.

Camping out in the Preah Vihear temple complex, Cambodia 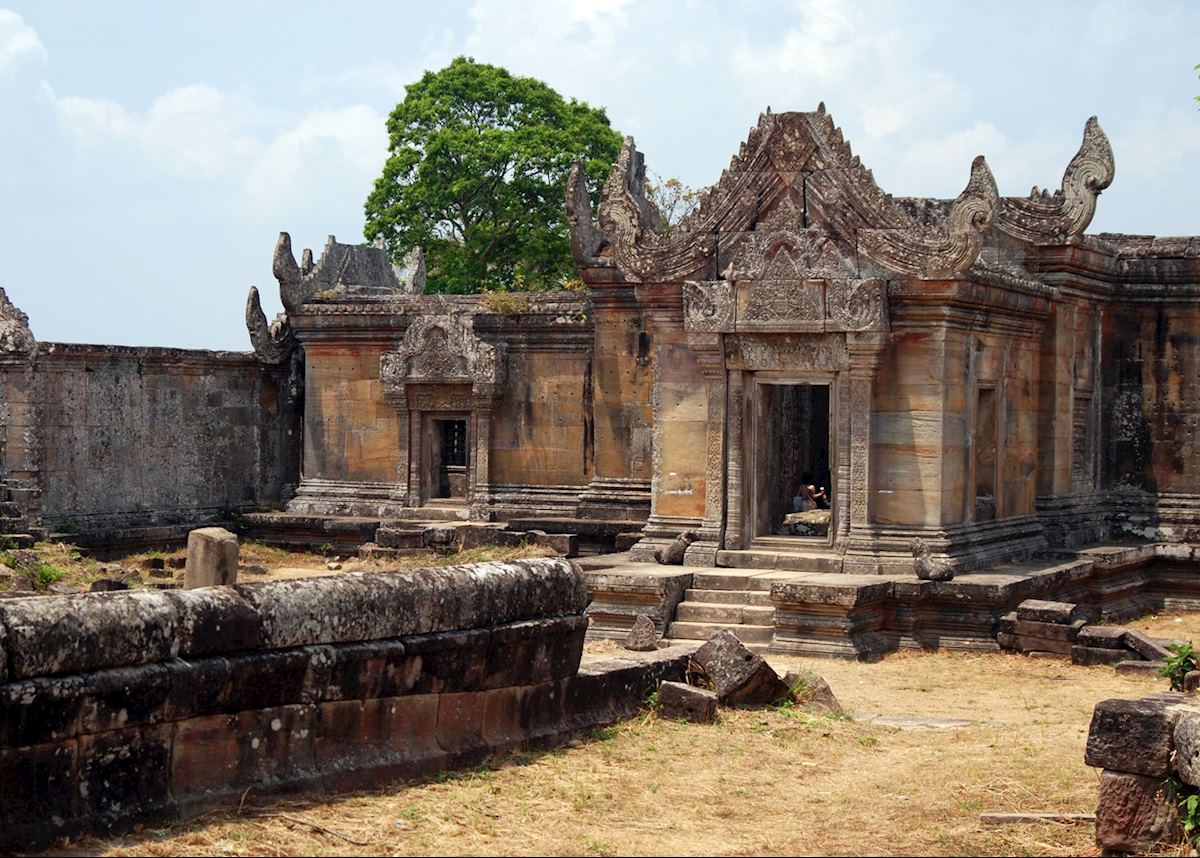 The central sanctuary at Preah Vihear

For many years, the 9th-century Preah Vihear temple, high above the plains of northern Cambodia, has been off-limits due to an ownership dispute with Thailand. The UK Government's Foreign Office lifted its travel embargo in 2015, putting it back on the map.

A three to four hour drive north from Siem Reap takes you to the foot of the Dangrek Mountain range lining the border with Thailand. Ascending the precipitous rough road up the mountainside to the temple site, you’re rewarded with views over the Cambodian plains below.

The best way to experience the site is to camp out overnight in the grounds of the temple itself. We arrived mid-afternoon as other visitors were starting to head home. While I explored with my guide, a team of local villagers helped set up our camp.

As the sun set over the plains beneath us, my guide Om Noth and I sat on the steps at the far end of the temple complex, nursing a hot coffee and watching the smoke rise from village fires below. We returned to the camp to enjoy a meal of freshly cooked Khmer cuisine as Om told me how the temple was a key battle site in the fight with the Khmer Rouge.

In the morning you can sit back and watch the sun come up, long before any other visitors arrive. 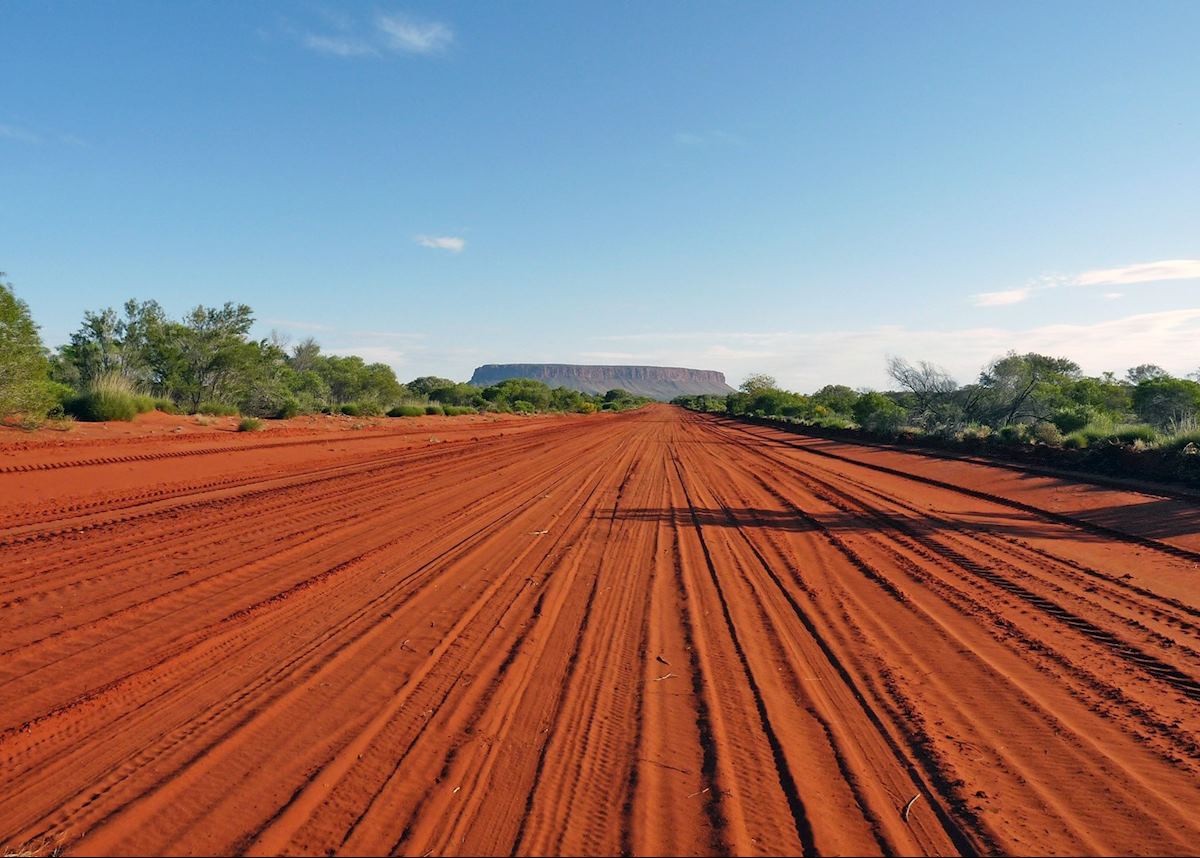 Most visitors to the Outback make a beeline for Uluru (Ayers Rock). Recently, I had the chance to visit another enigmatic monolith, Mount Conner (known locally as Attila), located 100 km (62 miles) east. Waking early, my small group climbed into a 4x4 and drove down the Lasseter Highway, while our guide recounted how hopeful young men would have come here to prospect for gold.

Soon we reached a weathered, unassuming homestead. We met its owner, who introduced us to his elderly father. We learned that he was the first person to turn a profit on the homestead’s cattle station after the government had asked him to take on the failing ranch. That night, our guide told more stories of people who had either been broken by the Outback, or learned to live within this wilderness.

We then got back on the road, winding down bumpy dirt tracks and stopping to visit a dry salt lake, one solitary tree breaking its crystalline crust. Soon, the giant flat-topped slab of Mount Conner loomed on the horizon. You could see why the locals nicknamed it ‘Fuluru’ — a reference to the fact that many visitors mistake it for its more internationally famous cousin.

Our guide led us up one of Conner’s boulder-strewn slopes to a rocky outcrop for a view over the Outback. We gained height quickly. From our vantage point on the monolith, desert stretched away as far as the eye could see, broken up by the occasional patch of small trees or scrub, and with no signs of human habitation. I’d never seen such emptiness and open space. 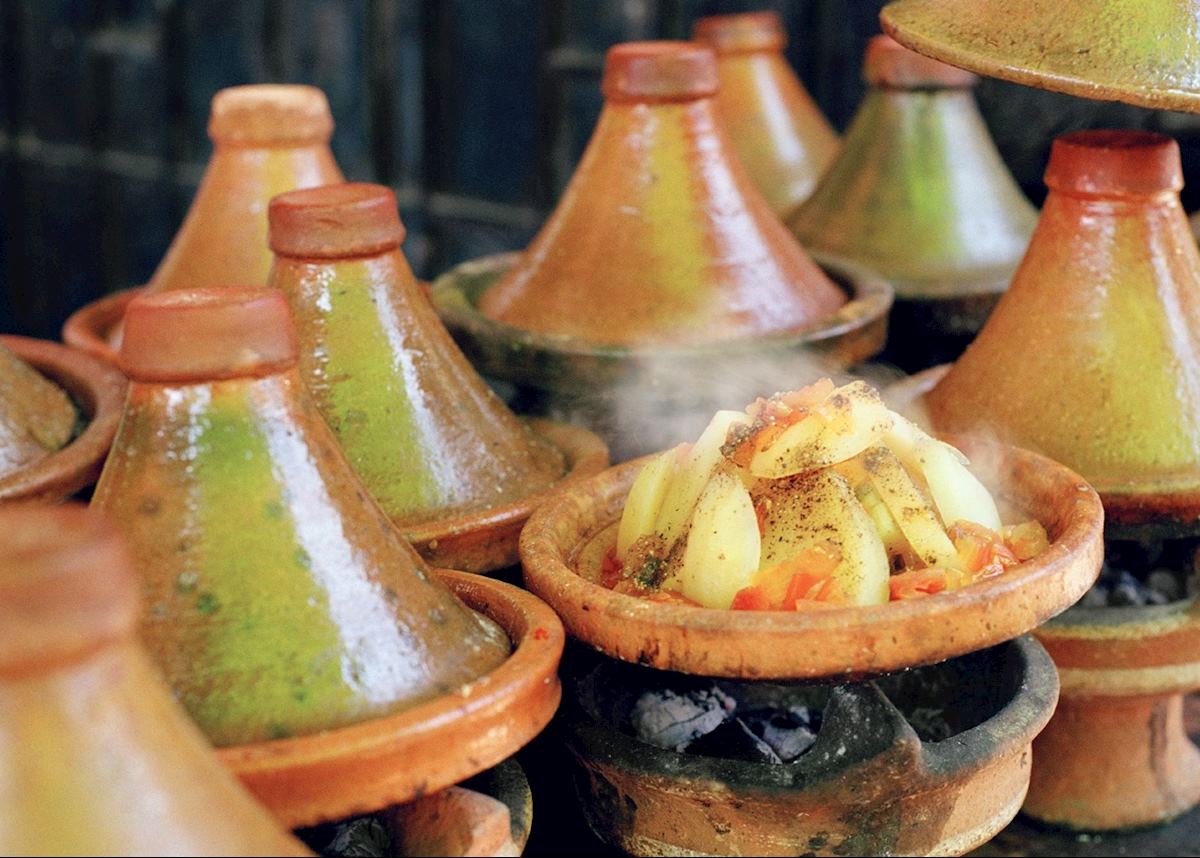 Throughout Morocco, women’s cooperatives help those from disadvantaged backgrounds to gain independence by learning new skills and earning an income. When in Marrakesh recently, my guide led me through the maze-like souqs of the Laksour Quarter to the Al Kawtar women’s cooperative. Here, women with physical or mental disabilities learn embroidery, as well as language, literacy and management skills.

The ladies here work together in a very social environment and soon welcomed me into their circle. They demonstrated some of their skills and showed me their work, which ranges from hand-embroidered table cloths and pillow cases to bracelets, purses and bags. These items are sold to fund the enterprise, with the rest of the profits shared out between the women.

Next, I was driven to Gueliz, Marrakesh’s new town. The Amal Association here provides six months of culinary and waitressing training to women aged 18 to 40 from disadvantaged backgrounds. Some are widowed or divorced single mothers, others orphans with no family support.

As part of the training, Amal invites members of the public to dine on its outdoor terrace, with all food cooked and served by the women. I enjoyed a delicious lunch of lemon chicken tagine before joining a Moroccan pastry-making class. Soon I had almost mastered how to make gazelle horns (horn-shaped pastries filled with almond paste).

• Start planning your trip to Morocco

Trekking to Annapurna Base Camp, Nepal 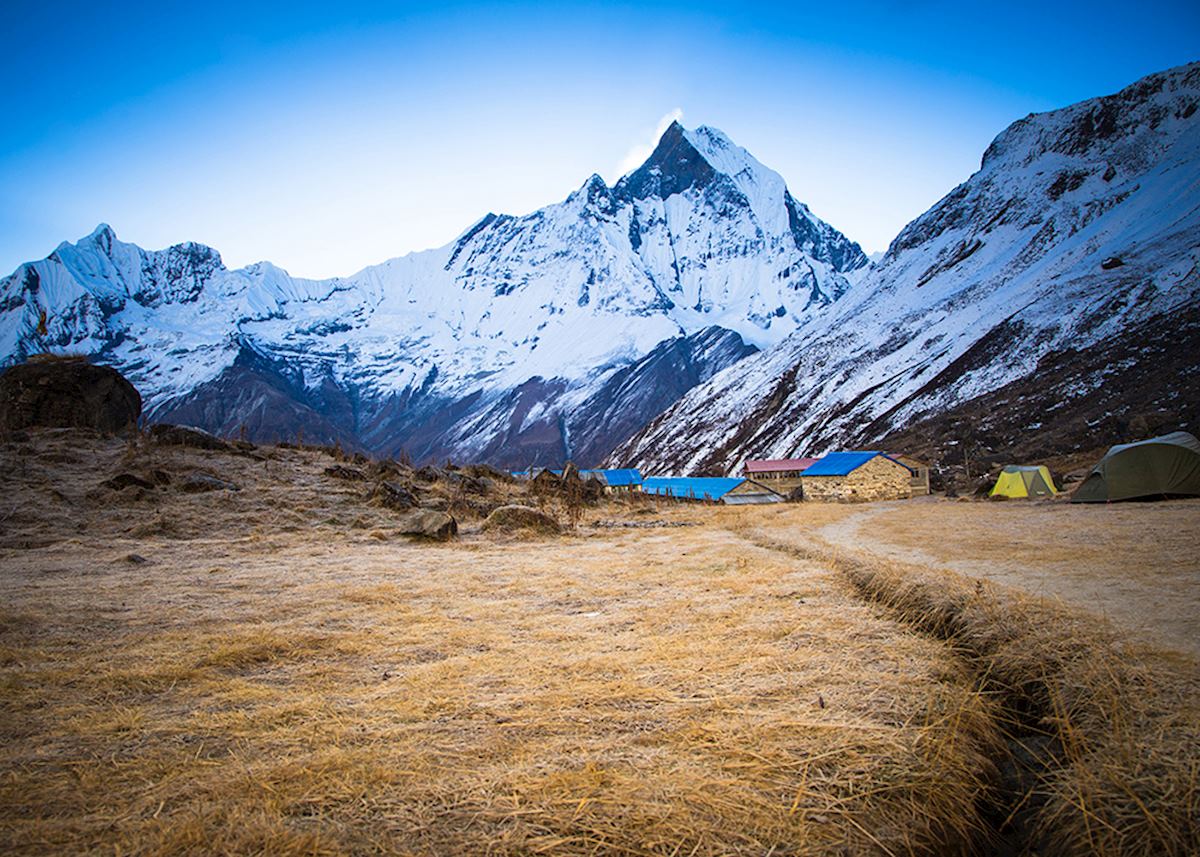 Completing the two-week trek to Everest Base Camp may be a badge of achievement for many hikers — and rightly so — but it’s not the only challenge Nepal has to offer. I’d argue that trekking to the lesser-known Annapurna Base Camp is just as rewarding, although no less strenuous.

The Annapurna range lies a day’s drive northwest of Kathmandu. Avoiding the unpredictable domestic flights to the Everest region, this ten-night trek can be fitted into a two-week trip — you’ll usually need three weeks to reach Everest Base Camp.

For me, the route’s main advantage is the diversity of the landscapes it passes through. Starting below 2,000 m (6,651 ft), you’ll approach the mountain passes through fertile fields and villages before reaching rhododendron forest and clusters of bamboo. On the sixth day, you’ll hike up into the Annapurna Sanctuary, an isolated basin encircled with a ring of jagged peaks.

From here you’re surrounded by craggy rock faces and glaciers. Annapurna Base Camp at 4,100 m (13,451 ft) is a jumble of low-rise buildings. You need a good level of fitness to make it this far, but you’re rewarded with a 360-degree view of some of Nepal’s highest peaks.