Impressionists I have known

From the sun-drenched fields of Provence to the cloud-dappled beaches of Normandy, the light and landscapes of France played an integral part in the birth of Impressionism. The artistic movement and the country are deeply entwined — and I fell in love with both as a university student, when I was studying art history in the States and French at the Sorbonne.

Even today, whenever I’m in France, I find myself returning to a few of the places that are important to the development of art in the country. There’s the museums of Paris, of course, but also Monet’s country estate and the small monastery-hospital where Van Gogh created some of his greatest works. You can see many of these sights on an 11-day tour of France.

Even if you have only a casual affection for the Impressionists and the Post-Impressionists, the Musée d’Orsay is one of the most important places to visit in Paris. Its collections include works created between 1848 and 1914, a tumultuous period when some members of the artistic community in Europe were breaking away from the drive to create photo-realistic paintings.

One of the earliest Impressionist pieces on display here is Olympia by Manet. He’s considered by many to be the father of the movement. The painter took a classical subject — a nude woman reclining on a couch — and stripped away trappings that were considered appropriate to the subject.

Instead of glorifying the woman with a mythical setting, he chose to paint a modern prostitute, confronting an issue that many preferred to ignore. He also rendered her as a flat figure, lacking the careful illusion of depth that academic artists cultivated.

Olympia and dozens of other works by Manet hang in the museum’s many galleries alongside those of his contemporaries: Van Gogh, Renoir, Monet, Degas, Klimt and Toulouse-Lautrec, to name just a few. Unlike the Louvre, this is a relatively compact space that’s easy to navigate and explore on your own, though an expert guide can add depth and nuance to any visit.

Many of the artists whose works are on display at the Musée d’Orsay lived for a time in Montmartre in the 18th arrondissement, a district on a hill north of the main city. At the time, it was a bucolic backwater far from the fashionable salons and chic cafes, made attractive by virtue of its cheap rents and a sweeping view thanks to the high butte. Monet, Renoir, Toulouse-Lautrec and Van Gogh all lived here at one time or another.

Renoir captured the area’s unbuttoned, buoyant atmosphere in Bal du moulin de la Galette, which is on display at the Musée d’Orsay. It’s a loving portrait of an open-air dance hall where artists and locals came to drink, eat and relax. The soft, yet vibrant brushstrokes masterfully convey the dappled light and free-wheeling atmosphere that saturated the gathering.

Montmartre is too expensive for most starving artists these days, but the quarter’s artistic legacy lives on at Place du Tertre. A cobbled plaza that’s lined with (overpriced) cafes, it fills every day with artists creating and displaying original works, including custom pencil portraits, Pop Art-inspired prints and even some Impressionist-style cityscapes.

One of the most serene places in Paris, the Musée de l’Orangerie is a former neoclassical greenhouse located in the gardens of the Tuileries. In 1927, it was converted into a permanent home for eight of Monet’s Nymphéas paintings, known in English as Water Lilies.

The massive canvases are displayed in two purpose-built oval rooms, lit by the sun filtered through a scrim. The soft, diffused light adds to the buoyant, almost floaty feel of the installation.

The paintings themselves depict water lilies on ponds. Soft washes of periwinkle, cobalt and violet are stippled with gentle pinks and yellows, capturing the fleeting sparkle of the morning sun on the water. There’s no horizon line and viewers are left wholly unmoored, without land to stand on or sky to see. The larger world is seen only in blurred reflections on the water’s surface, a glimpse of a tree or a patch of sky in between the titular lilies.

In the cool hush of the rooms, sitting on a bench specifically designed by Monet for the best view, I can appreciate his intention to create ‘a haven of peaceful meditation’ for Parisians. This is the closest that many city dwellers could come to finding the same sort of calm that he found in his gardens at Giverny.

Despite the wealth of riches on display in Paris, there is nowhere in France I love more than Monet’s gardens at Giverny. He spent the last four decades of his life in this small Norman town 90 minutes northwest of the capital, tending flowers and painting them over and over again — more than 250 times.

This is one of the most visited places in France, so I suggest arriving when the garden gates open at 9am, half an hour before the museum itself opens and the hordes arrive. If you go then, you’ll get a chance to wander through the manicured paths and over the Japanese bridge in relative peace.

If you can, visit in May or June, when the profusion of blooms is at its height. A riot of purple alliums, pink roses and billowing stands of bamboo sway in the breeze. On a sunny day, pollen-dusted bees buzz from flower to flower, the wind gently ruffles the lily-strewn ponds, and the sun streams between the trees onto the white gravel paths and lush lawns.

The interior decor reveals the intense sensibilities of an artist. The dining room, in particular, is a testament to Monet’s affection for bright hues — almost everything, including the chairs, is painted a vibrant yellow and the floor is a bold red-and-white checkerboard. Throughout the house hang reproductions of pieces he collected from his contemporaries, as well as his collection of Japanese prints.

Another 90 minutes northwest of Giverny, the small estuary port town of Honfleur might be called the birthplace of Impressionism. Honfleur native and landscape artist Eugène Boudin did something radical here — he took his easel outside. Eager to share the joys of painting seascapes en plein air, he invited his young friend Monet to visit — and changed the course of art history.

Monet wasn’t the only one to paint here. Many came to set up their easel on the beaches or at La Ferme Saint Siméon, a shingled 17th-century farmhouse on a cliff. Today it’s an elegant hotel with a Michelin-starred restaurant, a far cry from the inexpensive accommodations that once attracted the painters. But the cliff-side view remains painterly, especially in the early morning when the sun is low over the estuary where the Seine empties into the ocean.

This confluence of waters helped to create the clear, gentle light that so captivated the Impressionists and their forerunner, Boudin. You can see it particularly in the brightly painted boats and houses around Honfleur’s Vieux Bassin (Old Dock). I like to laze away an afternoon at a waterside cafe — many line the marina — watching the fragmented reflection of the streetscape in the waters.

If Boudin represents the earliest hints of Impressionism, Van Gogh embodies the movement’s eventual evolution into something else. He’s best known for his bold pigments and swirling sense of movement, but his early work often features a gloomy, dark palette. For example, The Potato Eaters, is full of earthy browns, greys and greens, and seems particularly grim next to the ebullient yellows and blues of his later pieces.

It wasn’t until he moved to Arles, a bucolic, honey-stoned town in the south of France, that his work began to change into the distinctive style that I adore. No one is certain why he stopped at Arles — it was likely the draw of the Provençal light. Certainly the town’s surrounding golden wheat fields, sunflowers and endless, buttery sunshine seem to have inspired him to refine what was to become his signature expressionistic style.

A tour through Arles and the banks of the Rhône is like strolling through a collection of his works: he seems to have painted everything in sight. You can admire the Cafe Terrace at Night from the precise spot where he stood to paint it — a remarkably similar scene (though the original, darker awning has been replaced with a yellow one to more closely replicate his piece). I’m fascinated by the way he painted a night scene using no black or grey, but deep blues and swirls of mellow gold.

In fact, Van Gogh spent much of his time in Arles trying to capture what he called ‘night effects’. Starry Night over the Rhône is a precursor to his better-known work with a similar title. He painted it working under the gaslights on the quayside just a few minutes from the yellow house he rented in town (now sadly gone). The view from that spot on the quayside remains remarkably similar to what Van Gogh painted, down to the elongated reflections of the lights in the water.

Van Gogh wrestled with depression while in Arles and eventually admitted himself to a monastery-cum-psychiatric house in Saint-Rémy, a small Provençal town to the east. Though the monastery is still used as a psychiatric retreat today, you can visit Van Gogh’s room as well as the fields and garden that he painted so often during his time here.

His year here was a frenzy of creativity and produced some of his best-known works: the Sunflowers series, his various Irises, The Bedroom and Starry Night, as well as his ethereal landscapes, such as Wheat Field with Cypresses. Aspiring artists can take painting classes and set up their easel in the same spots that Van Gogh did.

If you can, I suggest planning your visit for a Wednesday, when Saint-Rémy’s weekly market fills the main square with covered stalls selling herbed olives, newly pressed oils and bunches of lavender or sunflowers, in season.

Read more about trips to France 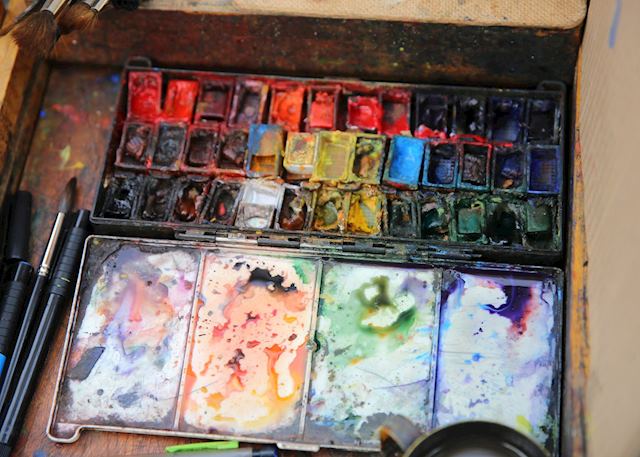