A pivot point of trade for centuries, Malacca is a Malaysian port city on the eastern shore of the eponymous straits, just a few hours from Kuala Lumpur. Home to a historic landscape of cultures, it’s a worthwhile and accessible destination, especially on the weekends when the markets are in full swing.

The city was founded in 1400 by Parameswara (also known as Iskandar Shah), a Sumatran prince. For centuries, it thrived as a major trading port thanks to its central location between the major powers of the region. From the start, Chinese, Indian and Arab merchants all traded and settled here, leaving behind indelible marks of their cultures. 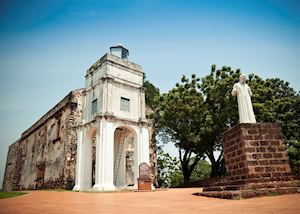 In the 16th century the Portuguese invaded, followed by the Dutch, who eventually traded Malacca to the British. European rule turned a booming economic port into an impoverished backwater, the conquerors unable to maintain the cosmopolitan openness that had made it a success in the first place.

Today, Malacca is flourishing again. That’s largely down to international visitors who come to enjoy the city’s mélange of cultures. In 2008, UNESCO designated the historic core as a World Heritage Site, citing its well-preserved mosaic of architectural styles, which includes elements of Portuguese, Dutch, British and Peranakan (Straits-born Chinese).

Here, grand mosques, pagoda-roofed temples and colonial churches dot the area’s narrow one-way streets. The squares are lined with a jumble of old shophouses, the pastel façades of private homes, chic galleries and traditional tea shops. You can stop at a restaurant that might serve Chinese dim sum for breakfast, Nyonya (a combination of Malay and Chinese) food for lunch and Pakistani tandoori for dinner.

Possibly the most striking buildings in the old town are at Stadthuys (a Dutch word for town hall), a stolid and hulking crimson-red Dutch colonial complex. They feature the architectural notes typical of the era, including heavy doors and louvered windows. Stadthuys served as Malacca’s administrative headquarters until the 1980s, when it was converted into a museum that examines the city’s history.

The area is small and easy to navigate on foot or riding on one of the city’s signature trishaws. In Malacca, these three-wheeled rickshaws are gaudily decorated — festooned with fake flowers, studded with stuffed animals and painted in shocking shades. Many have installed complex sound systems that play music as they roll by. 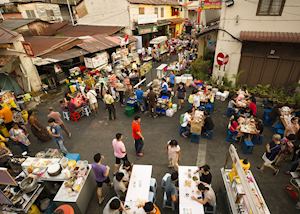 On weekend evenings in the city’s compact Chinatown, you’ll find Jonker Walk Night Market, a neon-lit crush of humanity. The street closes to cars and fills with people who are there to indulge in an unabashedly commercial night.

Here, you can snack on a skewer of barbecued quails’ eggs topped with mayonnaise and cheese (a local specialty) and sip on watermelon juice straight from the fruit as you wander past stalls that sell garish T-shirts, plastic knick-knacks and souvenir fans. At the market, trishaw decor goes from elaborate to outrageous — they pulse with ribbons of neon and strobing lights that whirl as the drivers pedal.

Northwest of Chinatown is Kampung Chetti, a small village that is the home of the city’s largest Chetti community. Chetti are Straits-born Indians who intermarried with Malays, a subculture stretching back to centuries before the Dutch invasion. Enter through a gate festooned with elephant head sculptures and you’ll find an area filled with brightly painted buildings and traditional temples, which particularly comes alive during Hindu festivals like Pesta Datuk Charchar.

Thanks to its latitude near the Equator, Malacca is hot year-round, with average temperatures near 30°C (85°F). This climate makes it a good place to visit at any time of year. The rains are heaviest in June and November, but they shouldn’t interfere with your visit too badly and can offer some respite from crowds.

Just a couple of hours' drive south of Kuala Lumpur and approximately 90 minutes from the international airport, Malacca is accessible and well worth a weekend visit, when the markets are at their best.

Our itineraries will give you suggestions for what is possible when you travel in Malacca, and they showcase routes we know work particularly well. Treat them as inspiration, because your trip will be created uniquely by one of our specialists.

Our expert guides to exploring Malacca

Written by our specialists from their own experiences of visiting Malacca, these guides will help you make the most of your time there. We share both our practical recommendations and the best ways to appreciate Malacca at its best.

We’ve selected a range of accommodation options for when you visit Malacca. Our choices usually come recommended for their character, facilities and service or location. Our specialists always aim to suggest properties that match your preferences.

Our specialists seek out authentic ways to get to know the places that could feature in your trip. These activities reflect some of the experiences they've most enjoyed while visiting Malacca, and which use the best local guides.