We’re not taking new bookings for travel to Saint Lucia at the moment. Our specialists can advise you on all the destinations you can currently book with us.

What to do in Saint Lucia: our highlights guide

Saint Lucia boasts twin volcanic peaks that rise dramatically from turquoise seas, idyllic beaches of wave-smoothed sand and a host of experiences in its mountainous interior, from 4x4 tours to waterfall walks.

You can hike along forested or coastal trails, explore archaeological and historical sites that shed light on the island’s past, or sail around the coastline, looking out for whales and dolphins that frequent the shores or pausing to snorkel in reefs populated by clouds of tropical fish. Below are just a few of the things to see and do in Saint Lucia that we most recommend.

Our selection of highlights in Saint Lucia

Hike to the summit of Gros Piton

A good level of fitness is required to hike to the summit of Gros Piton, the second-highest peak in Saint Lucia. Part of a UNESCO World Heritage Site, it’s the sweeping views at the top which will keep you going on this exhausting, but exhilarating, climb. The hike can take three to six hours in one direction, so starting in the cool morning hours is a must to ensure that you make it back to the bottom by nightfall.

As you ascend, you'll enjoy panoramic vistas from every angle, and can look out for interesting wildlife and plant life, with many species endemic to the island. The birdlife is abundant and the mountain is replete with former camps used by ‘brigand’ (bandits that lived in the mountains), which form a part of the folklore and history of the island. The view from the summit offers an unparalleled vista of Saint Lucia and other nearby Caribbean islands on a clear day.

Another way to gain views over the Pitons is to take a helicopter flight over the island. There are various options to explore the north or south. We suggest a 20-minute island tour that takes in the Pitons, the dense vegetation of the rainforest areas and the photogenic bays along the Caribbean side of the island. If you’d like to see the rugged Atlantic coast and its fishing villages, too, this can be covered on a 30-minute tour.

Explore the lush rainforest and waterfalls

If hiking Gros Piton sounds a little too strenuous, you can still explore the lush rainforest of the island’s interior by 4x4 or on one of the gentler nature trails in the area. Dense rainforest stretches across the island and is home to an array of exotic flora and fauna, waterfalls and viewpoints over sweeping valleys and the sea beyond.

Set slightly south of Soufriere, this relatively short and challenging trail rewards you with views of the Pitons. The trail takes around 45 minutes in each direction depending on your speed up hill. On the way to the top, you'll likely pass various native species of flora and fauna. We recommend walking with a guide, who’ll help point them out and explain the traditional medicinal purposes of many of these plants.

Pigeon Island, managed by Saint Lucia National Trust and connected to the mainland by a causeway, is a living museum that’s considered one of the most important monuments of Saint Lucia’s history. Among its archaeological and historic sites are the ruins of military buildings used during the battles between the French and British for Saint Lucia. A look-out point at the top of the fort provides panoramic views of the northwest coastline.

If you want to get out and mingle with the locals, as well as taste some delicious fresh fish, we suggest visiting the Friday Fish Fry that’s held in both the north and south of the island. Large numbers of people from all over the island come to enjoy this bustling street party, marking the start of the weekend. Sample fish, chicken and local lambi (conch) freshly caught by the community’s fishermen and cooked in kebabs.

Saint Lucia has its fair share of resident and visiting cetaceans and you’re very likely to spot some while you’re there. Look out for pods of spinning and spotted dolphins, and the more elusive pilot, sperm and orca whales. Even if you don’t see all of these creatures, you can enjoy the view of the island’s mountainous landscape as you sail along.

From March to July, head to remote, little-visited Grande Anse beach to see turtles lay their eggs. Three species nest here: green, hawksbill and huge leatherback turtles, the largest reptile in the world. While, all three species are endangered, a local turtle watch project is working with the Saint Lucia National Trust and the government to protect the turtles who reside here and allow people to see them in a responsible way.

Saint Lucia has a blend of cultures, descended from the island’s first inhabitants, the French and British colonists and the enslaved Africans they brought with them. The island still shows plenty of its French heritage, and although English is the main language, most islanders still speak Kwéyòl, a language similar to French. In the traditional calypso, sung in Kwéyòl, singers create verses based on local news and gossip, often getting progressively bawdy as the song continues, and with the audience singing along. The Folk Research Centre, set in an old estate house in Castries, preserves and documents local culture and folklore.

Discover the ‘other side’ of the island

With most development focused on the west coast, the east coast and central part of the island offer insight into a quieter, more traditional way of life. For a taste of this rural life, head to Babonneau, a quiet farming community set in the hills, and meet a local Kwéyòl family. Learn about their way of life, the spices and plants they grow and the traditions still upheld within the community. Or, head to the agricultural and fishing villages of the east coast.

Look out for exotic bird species

Saint Lucia is home to over 160 species of birds, including six endemic species. There are a number of key birdwatching sites on the island, including the Millet Bird Sanctuary, where you have a chance of seeing over 30 species (five of which are endemic).

The Des Cartier Rainforest Trail is one of the best sites for birdwatching on the island. It offers possibly the best chance of seeing rarer birds, including the Saint Lucia parrot, the national bird. If you're braving the strenuous trail up Gros Piton you can also spot endemic birds along the hike.

Dive and snorkel in the coral reefs

The west coast offers great snorkeling and diving opportunities thanks to the coral reefs just offshore. In particular, a marine management area protects much of the southwest shoreline, so the protected reefs here are abundant with tropical fish. 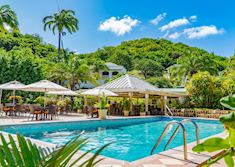 Stay at an historic cocoa plantation set among Saint Lucia's rainforest and discover the famous pitons before heading to Grenada for a week of relaxation and exploration. 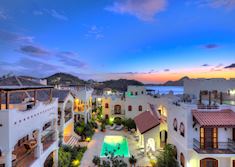 Enjoy incredible views of Saint Lucia's pitons from a beautiful resort set among the rainforest before heading to the north coast of the island for a relaxing week at an elegant beach resort. 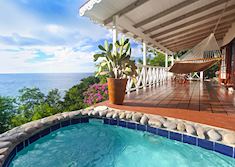 Ti Kaye Resort and Spa & the North Coast of Grenada

Discover Grenada's nutmeg and cocoa plantations and beautiful countryside before heading to St Lucia for a week on the beach at the charming Ti Kaye Resort.