A stay at Newbury Guest House places you in the heart of Back Bay and gives you great access to the city’s best sites including the Charles River, the Prudential Center and Copley Square.

There is a welcoming atmosphere that’s accompanied by friendly service at the front desk. Each afternoon, you will find freshly baked pastries from the bakery downstairs, as well as coffee and tea served in the lobby.

Perfectly positioned for shopping and dining out in Boston’s Back Bay neighborhood, Newbury Guest House offers a home-away-from-home in a well-preserved and historic Bostonian home. Be sure to grab a pastry from the lobby lounge in the afternoon when you return from the day’s adventures. Complimentary breakfast is provided, but the food can be very hit or miss. We think it's better to go out and experience the local breakfast places.

There are 32 well-appointed guest rooms that are spread out over three floors of this traditional 19th-century building. The guesthouse was once three interconnected private homes, so no two rooms are the same, however they are all spacious with large windows, have premium bathroom amenities and modern furnishings. Wi-Fi is complimentary.

Newbury Guest House is perched among the red-bricked buildings of Newbury Street in Back Bay, one of Boston’s most exclusive and picturesque areas. Lined with trees that are adorned with fairy lights at Christmas, pink blossom flowers in spring and hues of red, orange and yellow during the fall, Newbury Street is often described as Boston’s premier shopping and dining destination.

The Copley MBTA stop is close by and is on the green line. You can easily access the Museum of Fine Arts, Fenway, Government Center for Faneuil Hall and the Public Market and also North Station for games at the Garden and North End food tours.

In the morning, a complimentary breakfast is served in the restaurant below the guesthouse and in the afternoons, freshly baked pastries and hot beverages are served in the lobby area. For dinner, there are a huge variety of restaurants in the neighborhood surrounding the hotel.

As a guesthouse, facilities at the hotel are limited. However, due to the location of the hotel, there are a wealth of possibilities on your doorstep. Perusing the boutiques on Newbury Street and at Copley Plaza is a lovely way to spend a morning or afternoon, and Boston Public Library and Boston Common are just a short walk away.

Our itineraries are there to spark ideas for how you could include a stay at Newbury Guest House as part of your trip. Treat them simply as suggestions, because every aspect of the trip we create for you will be yours to define.

View all accommodation in Boston

Boston and nearby places 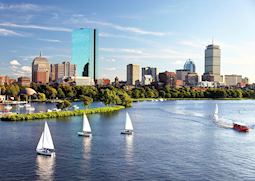