Seemingly endless ocean and long beach grass swaying in the breeze. The sound of waves crashing against the sand as lobstermen bring in the daily catch. Brightly painted gingerbread cottages contrasting against mammoth, modern estates. Martha’s Vineyard is the quintessential New England beach community, where you can enjoy the beach, cycle around the island or grab a bite of fresh seafood.

Explore the narrow streets of Edgartown as you walk among the weathered, cedar-shingled buildings. Take a break from the gentle sloping beaches and head to the glacier-carved cliffs at Aquinnah.

Located just 11 km (seven miles) from the mainland of Cape Cod, Martha’s Vineyard is the third-largest island on the East Coast. A long-time retreat for affluent New Englanders, the population swells to more than eight times its year-round population during the peak summer months. 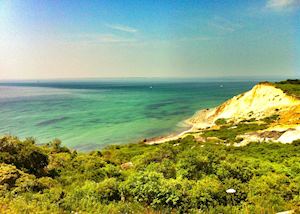 With its soft beaches, plentiful seafood and enchanting small towns, Martha’s Vineyard attracts visitors from all walks of life. From New Englanders to celebrities and former presidents, nobody is immune to the charm of the Vineyard, as it’s known to locals.

In addition to its famous guests, the island is something of a celebrity itself — it was the filming location for Steven Spielberg’s Jaws. Jumping from the wooden, two-lane ‘Jaws bridge’ into the water below is a rite of passage for many visitors.

You can take in the vivid contrasts of the blue water and green beach grass as you stroll along the sandy footpaths to the ocean. Martha’s Vineyard offers calmer waters at its northern beaches and a slightly rougher surf on its southern shores.

Head to Oak Bluffs Town Beach for calm, shallow water, Long Point Beach for great swimming or Katama Beach if you prefer a few waves. At Aquinnah Public Beach you can enjoy the water while taking in the views of the Aquinnah Cliffs — towering red clay bluffs that melt into the beach where they touch the sea, giving the sand a rainbow hue.

At the top of the precipice sits Gay Head Light, the site of the first lighthouse on the island. Though the current lighthouse is not the original structure, there’s been a light guiding sailors on that spot since 1799. Gay Head Light is one of five lighthouses you can see on Martha’s Vineyard.

The biggest of the island’s six towns is Edgartown. It has no traffic lights and no chain stores, but its streets are far from empty. You can sip artisan coffee at the town’s cafés or take advantage of the abundant local seafood by eating dinner at an oyster bar. Downtown also provides a good shopping scene, with plentiful boutiques to explore.

New England experiences four distinct seasons, with cold, snowy winters and hot, humid summers. To make the most out of Martha’s Vineyard, we recommend visiting in June, July and August. The temperatures are warmest during these months, making it the best time for swimming and lounging on the beach. You might also visit in September, when temperatures stay warm and the island quiets down after schools return to session.

This sample itinerary will give you an idea of what is possible when you travel in Martha's Vineyard, and showcases routes we know work particularly well. Treat this as inspiration, because your trip will be created uniquely by one of our specialists.

We’ve selected a range of accommodation options for when you visit Martha's Vineyard. Our choices usually come recommended for their character, facilities and service or location. Our specialists always aim to suggest properties that match your preferences.