Our travel photography competition in conjunction with The Sunday Times drew to a close a couple of weeks ago. Thank you to everyone who entered, the standard was outstanding.

Our three overall winners have been chosen, and you can find out more by visiting our competition page. But below, we’d like to share the last eight winning photographs and the captivating stories behind them.

'This was a shot I had in my head for a long time. Cinque Terre translates as ‘five lands’. It is made up of five villages that are all built into the cliffs and until recently were only accessible by boat or by a train journey through tunnels cut into the cliffs.

The camera I used was a Canon 6D and 24-105mm f4L lens. I shot in aperture priority mode at f11 to give me a good depth of field. I used the lowest possible ISO to give me the sharpest image possible. After three hours of shooting I was sitting in a wine bar in the village flicking through the images on the back of the camera, I knew I had captured something special.'

'The Embera are a tribe in Panama who live deep in the forests in the Darién region. We reached their village in small boats, where we were entertained with dancing and given a traditional meal. The young girls I met were intrigued when shown some footage of their dancing on my phone. When travelling I use a Nikon AF 28-200mm f/3.5-5.6G IF ED on my Nikon D610.  This is a remarkably compact vintage telephoto lens which does not intimidate the subject and produces very sharp results.'

Famous for its colonial history and astounding canal, Panama is a country of contrasts. It’s worth travelling that bit further into the hills just north of Panama City to learn the traditions of the Embera Indian community.  A traditional open-top Embera motorised canoe can take you up to the village where you’ll be greeted with music, dancing and wonderfully welcoming people.

'My ambition to see a polar bear meant spending long hours in the icy wind with my eyes peeled. Despite the apparently yellow fur, they disappear into the backdrop alarmingly quickly, earning their reputation by Eskimos as 'shape shifters', but I wasn't about to miss my shot. As the icy landscape reflected a lot of light, this allowed me to drop the aperture to my lens's 'sweet spot' at f11.

Camera shake was a problem with very cold hands, gloves being too thick to make delicate adjustments, so shutter speed needed to be fast enough to counteract. The tendency is to want to get a frame filling shot of the bear. However, in this shot I tried to step back and tell the story of the lonely king of the Arctic, traversing its kingdom of white often completely alone against an inhospitable and barren world.'

Seeing Polar bears in their natural environment is utterly thrilling and there are only a handful of places in the world where this is possible. Read our guide to viewing polar bears in northern and Arctic Canada.

'There were hundreds of flamingos feeding on the plankton in this beautiful Red Lagoon of Bolivia. As I wanted a clean shot with no distractions, it took a while to identify a sufficiently isolated, well posed group. Although it is more usual to see things grouped in threes, I felt that the fourth flamingo added balance so decided to ignore convention. I was lucky in that there was a slight wind which increased the pinkish red colour of the water, and provided the lovely pastel hue to the background.'

'This photograph was taken last year during my first time visiting Bali. When I was there, there were a few children playing in the dam and luckily I could communicate my idea for the photo with them as I speak Malaysian, similar to Indonesian. I used my  Canon 5D MK III, Canon 70-200 F2.8. The aperture was set at F3.2 to have some separation between the children and background and the shutter speed I used was 1/500 secs to ensure the sharpness of the children.'

Bali is also well-known for its colourful ceremonies, magnificent temples and striking art, music and dance that all stem from its fascinating Hindu culture, but you’ll also find lush rainforest and volcanic landscapes to explore. Bali’s most sacred mountain, Mount Batur is an active volcano set inside two concentric calderas. Although relatively easy to climb in the day, the best time to tackle the mountain is before dawn, meaning you arrive at the summit just as the sun rises over the volcanic peaks of the island.

'This shot took eight years of perseverance to get. Rockall is the most difficult, desolate and isolated islet in the world to get to. It was taken from a Phantom 4 drone controlled through my iPhone. Low altitude always gives an angle or perspective that has never been seen before and the advance of relatively cheap drones now allows this. Until we got back to dry land I didn’t realise what a spectacular image I had truly captured.'

'During a trip to western USA in 2011, we were stopping overnight at a lodge in the Grand Canyon Village on the south rim of the canyon. Just before sunset we went to the rim to take a variety of photographs. I was looking to isolate some of the more unusual rock formations which had contrasting colours and lights. I metered the exposure on the brightly lit rock in the foreground but checked that there was still detail in the shadow areas in the background. I always shoot in RAW mode to give maximum image information.'

A World Heritage Site, 277 miles long and 6,000 feet deep, the Grand Canyon is one of the world’s greatest wonders. At the bottom flows the Colorado river which despite its size appears small and insignificant from the top of the canyon, only adding to the sense of awe from the sheer scale of the rock face. While driving along the 25 mile stretch of road forming the Desert view drive, we recommend stopping at Lipan and Moran points to observe the breathtaking views of the canyon as well as the layers of multi-coloured rock.'

'This photograph was an opportune moment. We had no idea there was going to be a pageant in Galle that day. There were lots of things to photograph, but I knew these kids would make a great shot. They loved the camera and did a series of poses for me. I went with this one for the competition as the boy in the centre was looking right at me. I have a micro four thirds camera, which is lighter and smaller than DSLRs, and therefore great for street photography.'

We highly recommend taking in Galle as part of a wider trip to Sri Lanka. A UNESCO World Heritage Site, it’s the country’s best preserved colonial town with Portuguese, Dutch and British influences all apparent. Great pleasure can be taken from wandering the tangle of streets around the fort area and simply soaking up the atmosphere. 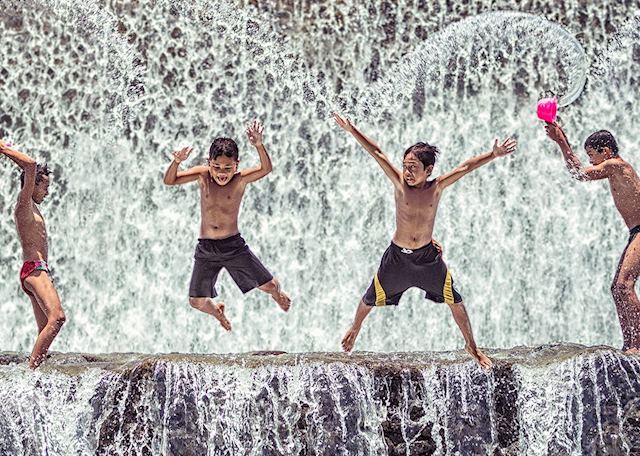