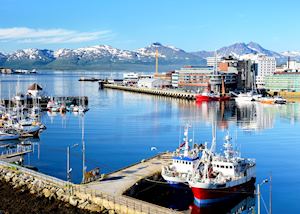 Straddling three small islands, and sitting right on the edge of fjord-carved and mountain-cleaved wilderness, Tromsø is your launchpad for exploring the Norwegian Arctic. Chasing the northern lights, husky-sledding through frozen valleys, sailing by the light of the Midnight Sun, hiking to mountain peaks, or sea-kayaking over sunken warships — there’s something for all seasons. And by ‘all’, we mean ‘two’, for there are only two real seasons up here: summer and winter, and how you explore depends when you visit.

Central Tromsø itself is also worthy of a closer look. It’s a compact place, layered with the history of human polar exploration (Amundsen led expeditions from here) and a still-strong Sami presence, plus a grislier but no less interesting heritage of whaling and sealing. Today, Tromsø is a thriving university town, with the architectural showpiece of the Ishavskatedralen (the Arctic Cathedral) and a cable car to (momentarily) draw you away from the wilds.

Things to see and do in Tromsø

One oft-quoted stat about Tromsø is that it boasts more pubs per capita than anywhere else in Norway — and, come Friday and Saturday night, you’ll certainly get a feel for the city’s merrymaking.

More intriguingly, perhaps, is the fact that levels of SAD (seasonal affective disorder) are dramatically lower here than in many other parts of the world located further south — and this in despite of Tromsø being annually cloaked in darkness during the 50-day Polar Night. For this is a population who relishes and celebrates winter: visit during the colder months, and you’ll see candles burning at windows, people commuting via skis, and the soaring 11-triangle-structure of the Arctic Cathedral lit up with nightly concerts. 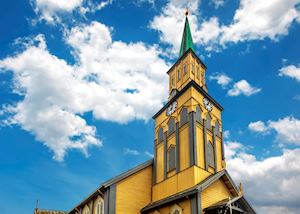 As well as the strikingly contemporary Arctic Cathedral — also a working parish church, with a wall of stained glass that glows in the Midnight Sun — Tromsø has the Polar Museum, dedicated to the history of trapping and early Arctic pioneers (with a bit of ghoulish taxidermy).

There are a clutch of main shopping streets, where wooden 19th-century ‘Empire’ houses, once belonging to merchants, sit alongside less characterful concrete constructions. Seafood and game restaurants, coffee spots and bars are strewn liberally about and along the waterfront areas, giving the city a cosmopolitan ambiance.

And, for the best view over the city, take the cable car to the top of Mount Storsteinen, from which you can see how Tromsø sits cradled among mountains, fjords, and scattered islands.

Around Tromsø in summer and winter 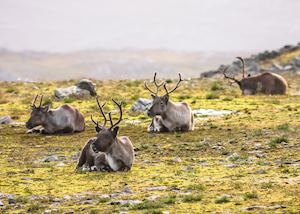 Tromsø makes a great base for various summer and winter activities, which all focus on exploring the landscapes and islands around the city.

An island west of the city and dotted with the second homes of Tromsø residents, Kvaløya is ideal for hiking or snow-shoeing, with a mountainous interior, birch woodland, fishing villages, and fjord mouths. In the summer months, you can hike with huskies, or go sledding with them during winter.

Helicopter tours over Tromsø are best suited to summer months, and allow you to glimpse how the yawning Arctic wilderness opens up around the city. You can also take a guided tour in a Tesla, which take you around the nearby island of Sommarøy, which pairs white, Caribbean-esque beaches and turquoise water with mountain panoramas.

You can sea-kayak down the glassy Sandnessundet strait, off the island of Håkøya, where Nazi Germany’s Tirpitz was sunk in 1944. For something more sedate, there are Midnight Sun sailings, which depart on the stroke of midnight while the landscape is bathed in the strange tangerine wash of north Norway’s midsummer.

Snowmobiling and reindeer-sledding are all possible during the winter months, as is whale-watching, when humpbacks and orca’s come to feed on the herring-rich waters of the fjords.

Tromsø is arguably one of the finest places in the world to view the northern lights, and one of the best vantage points for watching the solar activity is from the water. You can — hopefully — see the aurora borealis while sailing through the fjords around the city, accompanied by drinks and food. Visibility is better out on the water, as there’s less light pollution than on land, and you won’t have to contend with the glow given off by fresh snowfall. However if you’re a keen photographer, we can arrange a land-based northern lights experience to allow for long-exposure shots.

Tromsø is a year-round destination. Slightly more activities are available to you in winter, as long as you don’t mind the very short days, while high summer brings the endless nights of the Midnight Sun. We recommend visiting between September to April if you’re set on viewing the northern lights, while November to mid-February is ideal for whale-watching.

Start planning your trip to Tromsø

We’ve selected a range of accommodation options for when you visit Tromsø. Our choices usually come recommended for their character, facilities and service or location. Our specialists always aim to suggest properties that match your preferences.