The best time to travel to Uruguay, and particularly to its coastal areas, is during its summer months, between November and February, but travel is possible all year round.

There are international airports in Montevideo and Punta del Este making access to the country quick and easy. Uruguay’s infrastructure is good and travelling overland is the best way to explore.

Our local drivers and guides provide a fascinating insight into a country of which they are immensely proud, whilst our own specialists know and love Uruguay and are able to offer the most up to date information and tailor every trip into an adventure.

Combining Uruguay with other countries

Uruguay is most frequently combined with time in Argentina, either in the form of a visit across the River Plate from Buenos Aires to Colonia del Sacramento or Montevideo, or by ending a trip around Argentina with a beach stay on the Uruguayan coast.

However, for those with an interest in the outdoors, in particular birds, ranches and riding plus good food and drink, Uruguay easily offers enough to fill a week or even two.

The official language is Spanish, although English is widely understood and spoken by many in the tourist industry.

Montevideo has a wide selection of great cuisine, both local and international, as you might expect from a thriving capital city.

Uruguayan wine is not as famous as its Chilean and Argentine neighbours but its Tannat, manufactured with a sturdy grape, is definitely worth a try and is becoming more readily available worldwide. One of its varieties was awarded the prestigious 'Best Red Wine of the World' in Ljubljana's 2006 International Wine Competition.

We would recommend taking some US dollars with you to Uruguay, the smaller the denomination the better. The easiest way to obtain cash whilst there is by using ATMs (in major cities) which operate under the sign Redbanc. They take Cirrus, Visa and Mastercard. Credit cards are widely accepted, in particular Diner's Club, Visa and Mastercard. American Express is less recognised.

Traveller's cheques (in US dollars) are accepted at reasonable rates if exchanging them for pesos.

Allow £30 to £50 a day for basic day-to-day expenses (drinks, meals, etc). A local beer will normally cost around £1.30, a two-course lunch £15 and a two-course dinner £20. The further off the beaten track you are the more expensive goods tend to be.

Tipping for good service is an accepted fact and amounts are obviously discretionary.

When to go to Uruguay

You'll find temperature and rainfall information, together with a month-by-month guide on visiting, on our guide for when to go to Uruguay.

Speak to a Uruguay specialist to start planning your tailor-made holiday...

Speak to a Uruguay specialist to start planning your tailor-made holiday... 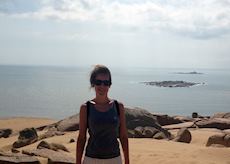