‘Pantanal’ comes from the Portuguese word for swamp, but this isn’t quite an accurate description of this South American wilderness that could easily swallow up a US state or a small European country. That said, ‘wilderness’ doesn’t quite fit the bill either — certainly parts of it are completely wild, while others are cattle farms. If you were to fly over it, you’d see sparkling blue pools of water interspersed with tranches of dry grassland and treeless savannah. Then there are other patches where the vegetation (dry forest) is so thick, you’d need to hack your way through with a machete.

Things to see and do in the Pantanal

The area floods seasonally and is naturally marshy, one of the reasons it’s such a fertile home for wildlife. Aside from the Galapagos Islands, it’s perhaps South America’s greatest wildlife draw: the animals and birds here are similar to those found in the nearby Amazon basin, but they’re much easier to spot due to the lack of dense jungle.

You spend your time in the Pantanal staying at lodges and going out on 4x4 safaris to observe the many species who flourish here. You can also explore on guided walks, by kayak, and on horseback. 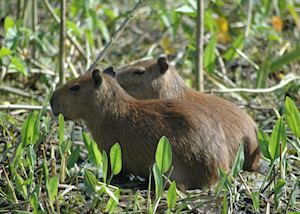 The land here has been worked for years by Pantaneiros, cowboys and skilled horsemen who wear leather boots and studded belts. They’re adept at spotting wildlife, and sometimes accompany you on outings, complementing the expert-biologist guides who’ll tell you all about what you’re seeing.

And, there’s an awful lot you might see. Jaguars are the prime draw, but they’re not the only treasure found here. Certain lodges are better for jaguar viewing than others, and some focus on jaguar conservation: your specialist will help you pinpoint the best place to stay.

Hyacinths and giant water lilies rest on the temporary lake surfaces, while underneath anacondas slither around the fish that are darting away from the feet of jabiru storks — one of the Pantanal’s signature birds.

Capybara and caiman sun themselves on the banks of streams and ponds while monkeys chatter and swing from tree to tree. Marmosets, armadillos and deer rustle in the undergrowth or grasses. Toucans, macaws and parrots occasionally make a break from the tree cover and come winging and squawking their way out into the open. Giant anteaters can be hard to spot, as they have such a sharp sense of smell, but you still stand good chances of seeing them.

Rarer still are giant river otters — great muscular mammals almost the size of a human, ocelots, and maned wolves. The latter are nocturnal, and look like foxes walking on stilts.

The southern Pantanal combines well with Bonito, which borders it, an under-the-radar region where you can go snorkeling and caving in crystal-clear rivers. The northern Pantanal can be paired with a couple of days in Chapada dos Guimarães National Park, notable for its waterfalls, red sandstone cliffs, and viewpoints.

Places to stay in the Pantanal 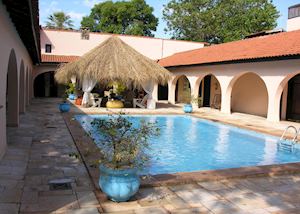 Stays here are based in fazenda-style (large farm-style) lodges, such as the Caiman Ecological Refuge in the south, or the Pousada do Rio Mutum in the north. Most have pools, and some have observation towers. Expect few bells and whistles: you’re staying on a hotel-cum-farm, often in an L-shaped building around a courtyard, as per the traditional fazenda style.

All meals are communal and hearty — breakfast is usually an international menu, though some places will offer the more traditional Pantaneiro breakfast of jerky and beans as an option.

There’s currently an initiative in place at many of the lodges we use. It aims to show farming locals how tourism can be as profitable as working the land, and can also protect the Pantanal’s fragile habitat from cultivation.

Best time to visit the Pantanal

June to September is the dry season, when the water recedes into pools and so acts as a magnet for surrounding wildlife, making them more easily observed. April and May can also bring dry weather, whereas March will see you hit the tail end of the wet season.

In general, be prepared for scorching days and cold nights, along with a fair amount of humidity.

Our itineraries will give you suggestions for what is possible when you travel in the Pantanal, and they showcase routes we know work particularly well. Treat them as inspiration, because your trip will be created uniquely by one of our specialists.

Map view Places in and around the Pantanal

Map of the Pantanal

Places in and around the Pantanal

Photos of the Pantanal

Accommodation choices for the Pantanal

We’ve selected a range of accommodation options for when you visit the Pantanal. Our choices usually come recommended for their character, facilities and service or location. Our specialists always aim to suggest properties that match your preferences.