Today, Dubai is known primarily as a gleaming metropolis of glass-and-steel skyscrapers, with an ever-changing skyline and a forward-looking attitude. However, if you know where to look, you can see past the glitz to find the elusive roots of this very modern city in the area around Dubai Creek. This tour with a driver and guide will help you glimpse the rapidly disappearing remnants of the city’s beginnings as an 18th-century fishing village.

It’s also a chance to learn more about the history and culture of the Emirati people. In the Al Fahidi Historic District, where the houses are topped with tall towers called barajeel, your guide will explain how clever engineers used these structures to keep buildings cool in the days before air conditioning. This is also where you’ll find traditional souqs and bazaars that manage to thrive despite existing in the shadow of the city’s palatial malls.

In the afternoon, your guide will pick you up at the hotel and you and other participants will drive into the heart of the city’s historic areas. On the way, you’ll pass the imposing Zabeel Palace, where the ruling family lives, as well as the graceful minarets of Jumeirah Mosque.

Working your way backwards in time, you’ll begin your walking tour in the Al Seef Marina, a relatively new area along the creek that’s lined with fashionable cafés. Then head into the Al Fahidi Historic District, where the narrow streets twist between tall buildings that provide cooling shade as you wander through.

Many of these buildings, which have been converted into galleries and small museums, still retain the traditional cooling towers. You’ll also learn more about other desert-living innovations, like the pierced lattice work on upper-story windows that lets through light and air, while still keeping the rooms cool.

Then, spend some time exploring Meena Bazaar, considered the oldest shopping district in Dubai. The bazaar is packed tightly with shops selling a bewildering variety of wares, from traditional textiles to handicrafts.

You’ll also be able to visit the textile souq, filled with shawls, scarves, embroidered cushions, traditional tunics, diaphanous dresses and sequin-spangled slippers. From there, take an abra (water taxi) across the creek, where you’ll have time to linger in the glittering gold souq and the fragrant spice souq before returning to your hotel. 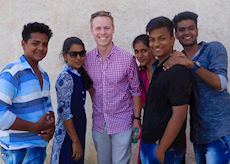