Ecuador's wildlife beyond the Galapagos: the Amazon and cloudforest

By Scott from our Latin America team

Although the Galapagos Islands are one of the planet’s undisputed zoological highlights, those interested in seeing a range of wildlife shouldn’t discount Ecuador’s mainland.

The thrust of a Galapagos trip might be viewing marine life and pelagic birds, but Ecuador's cloudforest also contains encyclopaedic birdlife. Meanwhile, the Amazon is home to several large mammals. Its leaf litter alone is rich in amphibians and insect life.

Then, unlike the Galapagos — where the wildlife is accustomed to people— in Amazonian backwaters or secluded cloudforest you might come across animals who have never laid eyes on a human being before.

Where and how can you see mainland Ecuador’s wildlife?

Ecuador’s wildlife is at its most prolific in three of the country’s key bioregions. The main places to go are the lowland rainforest of the Amazon in eastern Ecuador and the cloudforest around Mindo, northwest of Quito. There’s also the far-flung Podocarpus National Park between Zamora and Loja in the south, an area of temperate rainforest blanketing Andean highlands.

Wildlife-focused trips to Ecuador involve staying in self-contained lodges, where on-site guides will lead you on a number of wildlife-spotting walks or activities. In the Amazon, these experiences are often boat-based, with your guides paddling you around little-disturbed tributaries in order to increase your chances of seeing reptiles, birdlife and larger mammals (more on them, shortly).

If you have a very specific interest, there’s the option to travel with our own personal guide who’ll accompany you from Quito. But I find that the expertise of lodges’ guides is so good, this is often unnecessary.

The exception is if you’re planning to venture to Podocarpus National Park. Its remoteness means that there’s a dearth of English-speaking guides, so you might want to consider meeting up with a bilingual guide in Cuenca and then journeying south together.

Wildlife in the Ecuadorian Amazon

Flying over the Amazon rainforest, it looks like one homogenous green carpet. But when you get on the ground (or, more appropriately, on the water) you start to understand that it’s mosaicked with different forest types, from plashy, seasonally flooded várzea forest to the freshwater mangroves hunched along the banks of murky lagoons, to the grassier, soily areas known as terra firme.

The Ecuadorian Amazon’s main access points are from Coca and Tena, both around a two-hour flight from Quito. You’d then travel onward by motor canoe for a couple more hours to reach your lodge.

But unlike the Brazilian Amazon, some of the tributaries surrounding the Ecuadorian lodges are wider, and the foliage surrounding them less matted. You can sometimes see right into it, whereas in Brazil, the understorey is so dense you can’t see past your hand most of the time. This means that the Ecuadorian Amazon’s fervent biodiversity is easier to witness, and you stand a good chance of spying sizeable mammals and reptiles.

I’d only spent a couple of hours at one lodge — the Napo Wildlife Center — before I’d seen nine of the eleven species of local primates, including silvery-gold common squirrel monkeys (they look like they’re wearing white Zorro masks) and a rather stocky mantled howler monkey sitting high in a tree.

It’s important to choose a lodge that allows you to investigate smaller, out-of-the-way tributaries (usually in groups of around four to eight people), as this is where you’re likely to get better wildlife sightings.

On these tributaries, I’ve seen monkeys come right down to the bankside and investigate the boat, sloths dawdling in branches above, and a group of hoatzin — a punkish-looking bird with a spiky head crest and a pale-blue face — nesting on palm leaves bordering the water.

It’s the surprise appearances I find most thrilling. Once, on a guided canoe trip, I heard the sound of splashing, then crunching sounds. My guide went silent. And then all of a sudden three giant river otters crested out of the water and swam off into their holts in the bank.

Their powerful jaws make them notoriously noisy eaters — the sounds we could hear were the sounds of them gobbling fish. I was astonished at their size – they’re over double the length of a standard North American or Eurasian otter — and their rippling, muscular bulk.

It was also while paddling down a blackwater tributary that my guide pointed out an immense green anaconda sunning itself on a mass of floating vegetation. It was, on closer inspection, enjoying a post-prandial nap. For within its thick spiral of oleaginous coils (its body was as wide as my thigh) you could see a massive bulge — big enough to be a young caiman, or even a giant river otter.

Night walks in the Amazon

At night the forest awakens in a whole new way — and especially after heavy rains, when the leaf litter sings with the sound of flirting frogs (or those simply marking their territory). The air rustles with the batwings, and owls emit mournful hoots from the depths of trees.

After-dark walks give you a completely different perspective of the Amazon’s micro-ecosystems: you’ll be using your guide’s strong flashlight to explore the creatures at your feet and immediately around you. Near streams, you might spy the Amazonian balloon-frog. You’re also likely to see many species of spider and shouldn’t be surprised if the odd tarantula finds its way into your room. This is the Amazon, after all — the wildlife goes where it likes.

The flashlight is good for spotting the glinting eyes of snakes and caimans skulking along banks. My guide pointed out several Amazonian tree boas and green tree pythons draped over branches, feeding on mosquitoes and other insects.

By far the strangest creature I came across on a night walk was a parasitic fungus, ophiocordyceps unilateralis, which implants itself into an ant’s stomach and then embeds itself into the ant’s brain, taking control of its motor functions and effectively zombifying it. It was a bit unnerving seeing several of these tiny ants being puppeteered by the fungi sprouting from their heads.

Closer to Coca, you have the opportunity to visit one of several swathes of muddy earth. Unremarkable at first glance, you’ll see that the trees around this clay patch are heavy with birds — they happened to be lime-green mealy Amazon parrots on the day I visited. The birds edge closer and closer to this exposed bank of earth, until one daring soul makes the first move and it sets off a chain reaction. Soon the whole patch is swarming with birds who peck and lick at the ground.

Many species of parrot are dependent on visiting these claylicks as a way of ridding their bodies of the toxins contained in the nuts and seeds they eat. Squawking and squabbling among each other, they can appear a comical sight, but look closer, and you might see the shadows of birds of prey swooping over the claylick, or (as I did) a python hanging ominously in a nearby tree, its stomach fatted from its latest meal. Seeing that made me appreciate that visiting these claylicks puts the parrots in a vulnerable position: it’s a life-or-death situation for them.

There’s a sort of aerial corridor that runs from Panama through Colombia right down to the northern parts of Ecuador that’s used by many migratory birds. Because of this, it’s possible to see several hundred species of birds in Ecuador’s mist-fretted cloudforests near the town of Mindo. And you can get there in only a two-hour drive from Quito.

There’s a lodge here, El Monte, that came second in a worldwide birdwatching competition in which contestants have to identify — either by sight or by call — as many birds as possible in a 24-hour period. The owners, an Ecuadorian and American couple with strong conservationist principles, built their property on a huge plot of former farming land. They’re gradually reforesting it to help re-introduce even more bird species to the region. The lodge itself is built using sustainable, indigenous methods, such as banana-leaf roofing.

I’m also fond of Mashpi Lodge, a three-hour drive from Quito (and roughly an hour north of Mindo). It’s set in its own private reserve and offers some particularly unconventional but thrilling birdwatching experiences, including the ‘Skybike’, a bicycle-propelled canopy tour.

The main birdlife draw of Ecuador’s cloudforests? It has to be the Andean cock-of-the-rock. With its ostentatiously scarlet head crest standing out against its coal-black body, it has a clownish appearance and can be spotted sitting (posing?) in leks — its preferred clumps of branches — in the undercanopy.

But they’re not the only resident with showy, rainbow plumage. You could see everything from a turquoise jay to a crimson-rumped toucanet and a toucan barbet.

Hummingbirds are one of the Ecuadorian cloudforest’s delights and they can be seen everywhere — pinging around the flora as well as snacking on the feeders that lodges like to hang up.

Although these may seem an artificial way of attracting the birds, the feeders are filled with the same sugary solution that forms part of a hummingbird’s diet. Look out for spats breaking out around the feeders — hummers are known to be aggressive by nature, and need to spend around 90% of their day feeding in order to maintain their energy levels.

For a change of pace, or if you fancy a break from guided walks and experiences, you can simply position yourself by a feeder and tick off the species as they arrive — from the jewel-like velvet-purple coronet to the puffy-legged booted racket-tail.

Mammals-wise, you might see a tayra — an extremely cautious, weasel-like creature — and the racoon-like olingo. Spectacled bears can also be encountered in the cloudforest, but they’re incredibly rare. There’s no real rhyme or reason as to when you might see one. However, sightings of several rare bird species are possible if you’re prepared to spend several days here in the company of an experienced guide.

Hike the trails in this far-flung protected wilderness, and you’ll look out over hillsides whose outlines are fuzzed with patches of mist. Or stumble across a vast waterfall that appears out of nowhere, its multiple strands spuming downward over a jagged rock face. Anyone standing by its plunge pool looks puny.

Birdwatching here happens on the go, as you explore the park’s web of walking tracks — some with steep inclines, others with gentler gravel paths. A glance sideways might reveal the bright yellow underbelly of a blue-winged mountain tanager, or a highland motmot.

Podocarpus is also good place to combine a wildlife and wilderness experience with cultural interactions. The villages around this national park have not been developed for foreign visitors, and so can feel more authentic than those in other parts of Ecuador. Look at the faces of the residents walking their streets — you might be surprised to find that many people here live past the age of 90, having grown up on a diet of fresh organic food (and lots of walking).

Saraguro, located between Loja and Cuenca, is particularly worth a visit. Its inhabitants are something of a success story in Ecuador, as they have embraced a Western lifestyle while maintaining their Kichwa language and traditional dress. For example, both sexes wear their hair in one single plait. The market here is as authentic as they come, and throngs with cattle herders making their weekly pilgrimage to buy produce and attend mass.

Start planning your trip to Ecuador 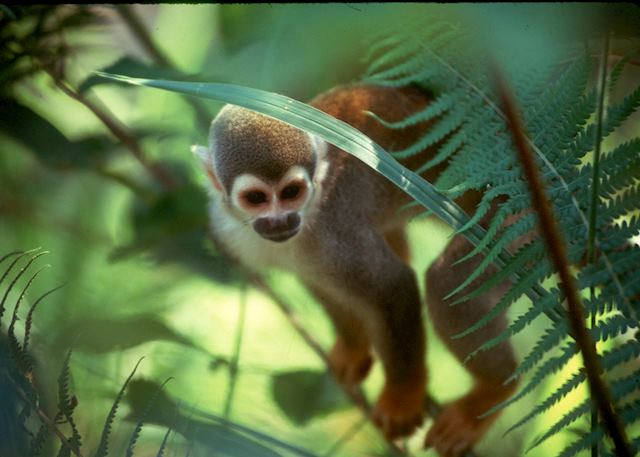