Built by the conquistadors on the site of a pre-Columbian settlement, Cuenca sits in Ecuador’s highlands. Mountain passes and four swift-flowing, boulder-strewn rivers ring the city.

Cuenca’s appeal lies in its central historic zone. This district of grid-like streets opening out onto plazas is compact enough to walk around. Cobblestones, fine townhouses, and graceful ironwork balconies decked with geraniums have led UNESCO to declare the area a World Heritage Site.

Despite its misleading name, the Panama hat was born in the nearby town of Montecristi and is made with locally grown toquilla straw. Workshops and factories that have perfected this age-old craft still carry on their trade around the city.

Laid-back, colonial Cuenca is Ecuador’s quaintest and prettiest city. A visit to one of the Panama hat factories is highly recommended, but it’s also just a great place to stroll around, taking in the flower and handicraft markets.

Things to see and do in Cuenca

Take a walking tour of the historic area

Guided walks are an excellent way to explore the main landmarks of central Cuenca. Tours usually begin at the western tip of the historic district in the Plaza de San Sebastián. This quiet square was used for bullfighting in the 18th century.

At the Plaza San Francisco, you step into a lively artisanal market. Here, stallholders sell the wide, multi-hued and heavily embroidered skirts typically worn by Cuenca’s ‘cholas’ (indigenous women from Ecuador’s Azuay Province, of which Cuenca is the capital).

All of Cuenca’s important administrative buildings circle the Plaza Mayor, but none are as striking as the New Cathedral. Its blue and white candy-striped domes can be seen all over the city. 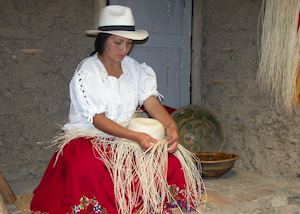 Cuenca’s home-grown headgear isn’t just for visitors. In the surrounding villages, you’ll see many local people wearing Panama hats. The best way to explore the hat production process is by visiting a factory or workshop. In central Cuenca, look out for craftspeople repairing battered Panamas.

Rafael Parades y Hijos, a small factory at the junction of Calle Larga and Calle Tarqui, is a particularly good small-scale hat factory and museum. The oldest hat-making establishment, Homero Ortega y Hijos, is good for ‘superfinos’. These pliable lightweight hats roll up into a thin sausage, making them ideal for packing.

Wander among blooms in the Plaza de las Flores

The flower stalls filling this small tiled square are all covered by the same elegant taupe sunshade. Vendors in traditional dress sell baskets heaped with all types of roses, orchids and many other specimens. The church of El Carmen de la Asunción, with its white façade and elaborate carved stone entrance, watches over it all.

The building occupied by Cuenca’s Museum of Modern Art has its own story to tell. A low-lying structure with two stately courtyards, it was originally a 19th-century temperance house, reserved for recovering alcoholics. Today, it shows paintings and sculptures by Ecuadorian and international artists.

The grander Central Bank (Pumapungo) Museum is a treasure chest of archaeological and ethnographic finds from the region. The tsantsas (shrunken heads) made by southern Ecuador’s Shuar people are a popular exhibit. Also contained within the museum complex are the minimal ruins of Pumapungo, a mysterious Inca city that is said to have once been as important as Cuzco.

It’s ideal for hikers looking to go on a day walk, or those interested in wildlife. The park’s residents include Andean gulls, black frogs and wild llamas. Guides accompany you through the park, navigating routes and helping you identify the vegetation and flora, which includes rare bromeliads.

Cuenca seems to enjoy a spring-like microclimate for most of the year. The weather is at its best, however, during Ecuador’s dry season (June to September).

Please note that the city can be very quiet on Sundays and museums are generally closed on Mondays.

Our itineraries will give you suggestions for what is possible when you travel in Cuenca, and they showcase routes we know work particularly well. Treat them as inspiration, because your trip will be created uniquely by one of our specialists.

We’ve selected a range of accommodation options for when you visit Cuenca. Our choices usually come recommended for their character, facilities and service or location. Our specialists always aim to suggest properties that match your preferences.

Our specialists seek out authentic ways to get to know the places that could feature in your trip. These activities reflect some of the experiences they've most enjoyed while visiting Cuenca, and which use the best local guides. 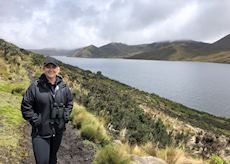