Italy is a country that is often high on people’s lists of places to visit. Packed with history, from Roman ruins to Renaissance masterpieces, coupled with its wonderful Mediterranean climate and delicious food, it is easy to see why it is so popular.

While not as off the beaten track as other countries we offer, we still apply the same theory when designing an itinerary, starting from scratch and looking at what the country has to offer each individual visitor. We can help you avoid the crowds and discover the country using our knowledge and expertise to tailor your every step.

Italian is the official language of Italy, although English is spoken widely. Do not be surprised to see Italians communicating almost as much with their hands as they do with words, punctuating their conversations with dramatic gestures and body language.

Italian cuisine is celebrated worldwide for its classical dishes; pizzas, pastas, risottos, Parma ham, Parmigiano-Reggiano cheese, panettone, gelato and of course cannoli, are just some of the delights on offer. Food forms a crucial part of Italian cultural identity and many Italians still rely on recipes that have been proudly passed down from generation to generation. Local seasonal produce festivals or feste abound across the country, whether celebrating artichokes in spring (March-May) or truffles in the autumn (September-October).

Passionate about coffee, the Italians  gave us the Cappuccino and Espresso. Italy is also one of the oldest wine-producing countries of the world and the home of Chianti, Prosecco, Pinot Grigio, Bardolino and Amarone to name but a few. Coupled with the country’s dazzling array of food, Italy’s wines are sure to complement any trip.

Celebrations form a huge part of the Italian way of life. The vast majority follow the Christian calendar — from carnevale at the beginning of Lent to Easter processions, joyful Ascension Day pageants and celebrations of countless individual saints’ days. Many more draw their influence from the country’s vibrant history such as the rivalry between different contrade or neighborhoods from Siena’s famous Palio horse race or Venice’s symbolic and highly traditional annual ‘Wedding to the Sea’. In the summer months expect to see costumed displays of revelry harking back to the country’s medieval heritage, from football matches and jousting to tug of war and archery competitions. Aside from history and religion, seasonal produce festivals are also hugely prevalent across the country.

Modest tipping in Italy is the norm. Rounding up a restaurant bill by a few euros is perfectly sufficient, though if you wish to tip more (cash is preferred) for exceptional service it will always be welcomed. A 10% tip is considered usual in a restaurant but generous for a taxi ride.

Italy’s currency is the euro and is widely available prior to travel. Visa and MasterCard are both widely accepted but paying by American Express or Diners Club card may not always be possible. Discover cards are not commonly accepted. Smaller transactions (under 10 or 20 euros) may incur a surcharge in smaller establishments if you want to pay by card, so it is a good idea to always have some cash with you.

Both ATMs (known as Bancomats in Italy) and foreign exchange counters are widely available in all major towns and cities across Italy (though you may struggle in smaller rural areas).

The country dialing code for Italy is +39 and unlike many other countries, the 0 at the beginning of the main number is dialed, not omitted. Phoning abroad from hotels can be expensive, however most hotels and many restaurants and cafés will have complimentary Wi-Fi available. Equally it is worth checking with your mobile phone provider to understand any costs with regards to making and receiving calls or using data abroad.

When to go to Italy

You'll find temperature and rainfall information, together with a month-by-month guide on visiting, on our guide for when to go to Italy. 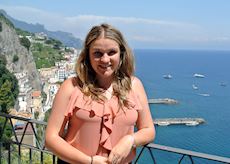