Strategically located at the heart of the Mediterranean, Palermo was a hub of trade, power and culture for thousands of years. Between the 9th and 12th centuries it was one of Europe's most important cities and today its streets are lined with a mix of Byzantine, Arab, Norman, Renaissance and Baroque architecture.

This complex heritage combines with an incredibly vibrant community in a city where extravagant churches sit next to stately palaces and souq-like markets. It’s Sicily's largest city and at times a chaotic place, but wander the streets and you'll quickly begin to appreciate its beguiling nature.

Palermo is gritty, but it’s a diamond in the rough. There’s so much to enjoy here, if you take the time to explore. From the celebrated street food to the blend of non-European cultural influences, such as Moorish and Byzantine.

Things to see and do in Palermo

A lavishly decorated private chapel within the Palazzo dei Normanni, once the seat of the Kings of Sicily, the Cappella Palatina is Palermo's most celebrated attraction. It was built in 1130 by King Roger II and is a masterpiece of Arab-Norman art.

Inside, the chapel is sumptuously decorated with a blanket of glittering mosaics inlaid with precious stones. The vivid depictions of biblical scenes are intricately detailed and lifelike. Above them, the honeycombed ceiling is elaborately carved and painted with scenes of hunting and war, while below, the marble floors are delicately laid out in geometric patterns. 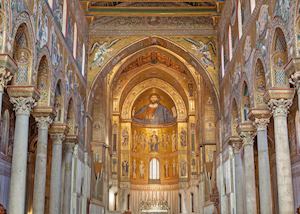 This quiet hill village just outside the city is home to one of Italy's most impressive medieval structures. The Cattedrale di Monreale was built by King William II, grandson of Roger II, who wanted to build a church so magnificent its rivals would pale in comparison.

The cathedral was completed in 1184 and its simple exterior gives little away about the treasures that lie within. Masters of Byzantine, Norman and Arab art worked on the opulent interior, which is completely covered in gleaming Old Testament scenes portrayed in mosaic. Outside is a tranquil cloister with carved columns and trickling fountains.

Set in a stately neoclassical building, the Teatro Massimo is Italy's largest opera house and the third largest in Europe. It took 22 years to build, opening with much fanfare in 1897 and soon became known for its perfect acoustics. Today, it holds 1,300 people and has five tiers of elaborately decorated boxes surrounding the horseshoe auditorium.

It was also the filming location for the final scenes of The Godfather Part III. Guided tours offer an insight into the building's history and access to the royal box and Pompeian Hall — but nothing beats attending a live opera, ballet or classical music performance here.

At the heart of Palermo's old city, the Quattro Canti is the grandly designed crossing of two of the city's main streets, Corso Vittorio Emanuele and Via Maqueda.

Around it are a circle of near identical Baroque buildings which date from the 17th century. Their curved façades are divided into tiers with each level displaying a different order of classical architecture as well as statues of the Spanish kings, the city's patron saints and the four seasons. At their bases are exuberant Baroque fountains.

From here you can walk to most of Palermo's main sights, monuments and museums.

Dominating the bay of Palermo and offering panoramic views of the city and the coast, Monte Pellegrino is a hill just north of the city. It's a popular weekend haunt for city dwellers who come to enjoy the views and parks, as well as paying a visit to the sanctuary of Saint Rosalia, one of Palermo's patron saints, who lived in a cave here as a hermit.

You can now visit the site and its 17th-century shrine set into the rock and where the water that drips from the roof is said to have miraculous powers.

This sample itinerary will give you an idea of what is possible when you travel in Palermo, and showcases routes we know work particularly well. Treat this as inspiration, because your trip will be created uniquely by one of our specialists.

Our expert guides to exploring Palermo

Written by our specialists from their own experiences of visiting Palermo, these guides will help you make the most of your time there. We share both our practical recommendations and the best ways to appreciate Palermo at its best.

We’ve selected a range of accommodation options for when you visit Palermo. Our choices usually come recommended for their character, facilities and service or location. Our specialists always aim to suggest properties that match your preferences.

Our specialists seek out authentic ways to get to know the places that could feature in your trip. These activities reflect some of the experiences they've most enjoyed while visiting Palermo, and which use the best local guides.