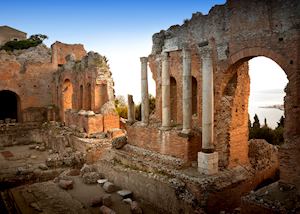 Taormina's most famous sight is its well-preserved Greek theater, which sits in a lofty position on the cliffside at the edge of the town. Perfectly placed to make the most of the views over the bay and Mount Etna beyond, the horseshoe-shaped open-air auditorium was built in the 3rd century BC and was later restructured by the Romans who added a colonnaded backdrop.