The road southeast from Marrakesh toward Ouarzazate climbs the Tizi-n-Tichka, one of the most dramatic passes in Morocco. However the easiest route to Ouarzazate lies to the east of this modern road, a narrow, graded track suitable only for 4x4 vehicles. The story behind this is partly told in the two kasbahs you see today, Ait Benhaddou and Telouet. Linking these kasbahs is the Oued Mellah valley, once a major trading route.

In the first of the kasbahs you will visit, Telouet, there are but a few rooms that can still be seen, as much of the kasbah has been closed off by falling ceilings and unsafe walls. However, the tiled walls, fluted pillars, beautifully painted wooden ceilings and colored glass windows of the reception rooms allow you to imagine what it must have been like in its prime.

At the other end of the valley, after a 4x4 drive past Berber villages terraced into impossible mountainsides, and centuries old troglodyte dwellings, is Ait Benhaddou, another Glaoui kasbah used to control the Oued Mellah trade route. This is the most famous of all Moroccan kasbahs, largely due to its appearance in numerous Hollywood films. Under the auspices of UNESCO, villagers have been encouraged and assisted to move back into the fortified dwellings, thus ensuring that they are maintained and repaired after each winter's rain. Thus it is one of the best preserved and most beautiful examples of Atlas fortified architecture.

Other experiences in Marrakesh 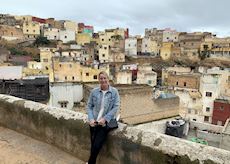