A sleepy lakeside city in the heart of the Himalaya, Pokhara is both the gateway and endpoint for those trekking the Annapurna Circuit. Hikers setting off can find guides and supplies here, and weary ones return to relax and recuperate. But, Nepal’s second-largest city is more than just a way station for long-distance trekkers. You can spend a few days here discovering the city’s Lakeside district and museums, as well as a nearby Tibetan settlement and the serene Lake Phewa.

In the mellow Lakeside area, you’ll find a laid-back attitude as well as a plethora of restaurants, cafés and shops. Because the Lakeside is compact and relatively flat, you won’t need to worry about transportation when you’re in Pokhara, especially if you stay near the lake.

Places to stay range from simple hostels that attract backpackers to indulgent hotels that provide spa services for hikers’ aching muscles. Temple Tree Resort & Spa offers a central location and spa facilities, while Tiger Mountain Pokhara Lodge — on a hill outside town — sacrifices convenience for uninterrupted views from each room. 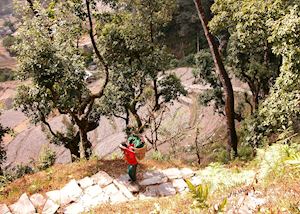 The aforementioned Annapurna Circuit is a challenging, high-altitude trek that takes about 20 days, journeying through the eponymous range. But, you needn’t embark on an epic journey to appreciate the local scenery. You can easily take shorter day-long or multi-day (as opposed to multi-week) hikes that cover only part of the circuit.

Regardless of how far you choose to go, we’ll arrange for your hikes to include porters, guides and overnight stays at traditional teahouses or more indulgent lodges along your route. Your efforts are rewarded with a constant series of roof-of-the-world vistas that encompass sweeping views of blue-shadowed valleys and snow-streaked peaks.

The mountain of Sarangkot is a 30-minute drive from Pokhara. A small village that shares its name overlooks the valley, and a visit here offers you possibly the best views in the Annapurna.

You’ll be able to see clearly all the surrounding mountains, including Dhaulagiri, Annapurna II and the distinctive double peaks of Machapuchare, as well as the gleaming surface of Lake Phewa. The view is particularly celestial at sunrise when the rosy gold light of dawn touches the snow-tipped summits before spilling down to illuminate the dark slopes.

For a more academic take on the mountains, the International Mountain Museum, on Pokhara’s southern edge, examines the history and ecology of the Himalaya. You’ll see the primitive-seeming gear used for early climbs, find out about the Everest expedition of Sherpa Tenzing Norgay and Sir Edmund Hillary, and gain an understanding of the delicate interplay between the Nepalese people and the fragile mountain ecosystems.

At the northern reaches of the city, the Gurkha Memorial Museum takes an in-depth look at these storied regiments. An elite force founded in 1815, Gurkhas have found themselves at many of history’s pivot points over the past two centuries, from the tumult in the 19th century through both World Wars to today’s peacekeeping missions. At the museum, you can hear about their origins, campaigns and the remarkable number of Gurkhas who have won the Victoria Cross.

Just north of the city, Tashi Palkhel is a settlement of Tibetans who fled their country in 1959. The tightly packed community is festooned with prayer flags that snap in the wind and seems like a displaced Tibetan village. A visit to the Jangchub Choeling Gompa Monastery, at the heart of the settlement, gives you a glimpse into the daily lives of the 200 monks who live here.

The shops here sell a variety of handicrafts to help support the community, including silver ornaments and textiles. Near the monastery, a carpet shop lets you see all stages of Tibetan weaving, done by women sitting cross-legged in front of enormous looms. You can buy your own carpet here or at the Tibetan Mini Market in Lakeside.

Phewa Lake, which makes up the western border of the city, is a vast and serene body of still, blue water that reflects the surrounding mountains, especially the distinctively sharp peak of Machapuchare. Birdwatching, you’ll find a plethora of wildlife on the freshwater lake’s heavily forested southern shore, including Himalayan griffon vultures and golden eagles.

To explore the lake, you can hire one of the boatmen who cluster by the shore in doongas (wooden boats) painted in bright shades of blue, yellow and red. They’ll be happy to take you for a pleasure jaunt or out to a two-tiered temple on an island in the middle of the lake.

Known as Varahi Mandir or Tal Barahi, it’s used by both Buddhists and Hindus. Don’t plan on restful meditation while you’re here — the cheerful pagoda-roofed temple thrums with visitors, especially on Saturdays.

On a ridge that overlooks the lake, the World Peace Pagoda is harder to reach but rewards you with a more serene experience. The gleaming white stupa was built by Japanese monks after World War II, one of dozens put up around the world to inspire people to work toward peace. There are three paths of various difficulties to the top of the ridge, where you can contemplate your place in the universe while enjoying sweeping views of the lake and cloud-wreathed slopes.

We suggest visiting from October to March. October and November are most popular, because the temperatures are comfortable and the skies are clear, but they also attract the most visitors. In March and April, the rhododendron forests bloom, their flowers offering a glorious grace note to the mountain views.

This sample itinerary will give you an idea of what is possible when you travel in Pokhara, and showcases routes we know work particularly well. Treat this as inspiration, because your trip will be created uniquely by one of our specialists.

We’ve selected a range of accommodation options for when you visit Pokhara. Our choices usually come recommended for their character, facilities and service or location. Our specialists always aim to suggest properties that match your preferences.