Cava, Spain's answer to Champagne, is produced in the Catalan region of Penedès, just west of Barcelona. A short drive will take you the 46 km (28 miles) to sleepy Sant Sadurní d'Anoia, the hub of production. Overlooked by the craggy mountains of Montserrat, the landscape of the Penedès is one of rolling vine-clad hillsides dotted with small towns.

Roughly 100 bodegas (wineries) cluster around the town, from big names to boutique producers. Together, they produce about 95% of Spanish cava. Numerous bodegas welcome visitors and will offer you tours of their vineyards and cellars, where you can enjoy a tasting and learn about the history of Spanish sparkling wine. 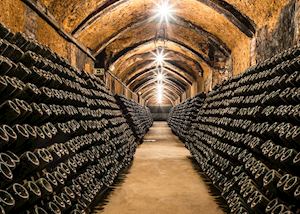 In the 1860s, Josep Raventós of the Codorníu Winery traversed Europe promoting his wares. After a visit to the Champagne region of France, he returned home to find his vineyards had been devastated by a plague of aphids. His red grape vines had to be replaced by white, and by 1872 he began to produce the first of Spain's sparkling wines. They were aged in local caves ('cava' in Catalan), and by 1970 the term was adopted by local winemakers to distinguish their product from its French counterpart.

Although Champagne and cava are similar in character and production, there are some significant differences. Cava is generally made from the macabeu, parellada and xarel-lo grape varieties unlike Champagne, which uses pinot and chardonnay. As cava doesn’t sit on the lees (sediment) for as long it’s lighter than Champagne, which is aged for longer. And, in Spain, the process of ridding the bottle of the sediment is normally done by machine rather than by hand, which in turn keeps the cost of cava down.

Freixenet and Codorníu are two of the largest producers. Both are based in Sant Sadurní d'Anoia and encourage visitors. Codorníu's 'wine cathedral', a magnificent Modernista building designed by Gaudí’s contemporary Josep Puig i Cadafalch, houses the largest underground cellars in the world. Some 34 km (21 miles) of tunnels hold more than 100 million bottles. The pioneering building is now a protected structure and its parabolic curves and intricate detailing make it a popular venue for special events.

April to November is a good time to visit with pleasant temperatures and numerous festivals. Human towers can be seen from spring into summer, in September the town of Sant Sadurní d’Anoia celebrates the 19th-century defeat of phylloxera louse, and in October there’s a dedicated cava festival.

Our itineraries will give you suggestions for what is possible when you travel in Cava wine region, and they showcase routes we know work particularly well. Treat them as inspiration, because your trip will be created uniquely by one of our specialists.