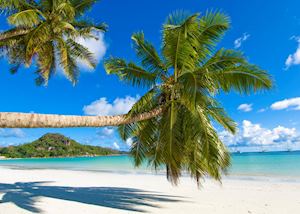 Curieuse is just one of Praslin’s outlying islands. A collection of islets, islands and atolls are scattered off the northeast coast, and surrounded by some of the region’s best snorkeling spots. The best way to explore is on a guided catamaran tour, where there’s a chance of spotting grazing turtles or the gentle sweep of a manta ray.