The Goldener Hirsch is nearly as much a part of Salzburg’s history as the nearby cathedral and castle. Dating back six centuries, it effortlessly blends then and now — you’ll find modern amenities such as Wi-Fi and air conditioning alongside antique shoemakers’ benches that have been transformed into tables.

The hotel is located on the bustling shopping street of Getreidegasse, which boasts an eclectic mix of attractions including international clothing chains, traditional inns and Mozart’s birthplace. The hotel has soundproof windows, so despite being centrally located, the rooms are quiet.

The in-house restaurants are two of Salzburg’s best-known eating spots — Herzl is a 250-year-old intimate eatery, while the Goldener Hirsch’s gourmet menu features the best of local produce. If you feel like eating out, explore the narrow streets and winding alleys of Salzburg’s Old Town just outside the door. 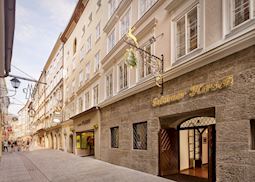 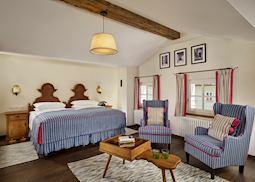 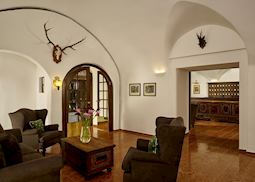 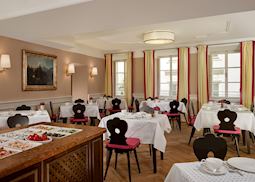 Spread between three buildings, the hotel’s 70 rooms each have a different shape and size, echoing the building’s historic charm. Antique wooden cupboards, hand-carved beds and converted tables make up their rustic character. The white walls provide a blank canvas for the bright-blue and red fabrics used throughout the furniture.

Options range from standard rooms to larger suites, including a two-bedroom suite that’s good for families. The bathrooms feature marble tops, and heated towel racks add a touch of modernity to the classic rooms. Wi-Fi, air conditioning and en suite bathrooms come standard in all rooms.

There’s not a more central location in Salzburg’s Old Town than the Goldener Hirsch. Step outside its doors and onto the cobblestone streets and you’re mere minutes from Mozart’s birthplace, the summer festival venues, the grand buildings of the Residenzplatz and The Sound of Music filming locations. Situated on the Getreidegasse, it’s also close to a multitude of restaurants, shops and cafés.

We love this property for its enviable location right on the main shopping street of Salzburg’s Old Town and its combination of history with modern comforts.