In the months of November to April, under cover of snow, Alaska and Canada become a different world. While grizzlies slumber, polar bears congregate in Canada’s far north. Long hours of summer daylight are exchanged for the northern lights. You’ll follow forest trails by dog sled or snowmobile, and exchange walking boots for snowshoes. The cities revel in their Christmas markets and winter festivals.

Although Alaska and Canada in winter is a very different proposition to visiting at any other time, our specialist Lucy is singing its praises. She looks at the experiences you won’t find here once the snow has melted away.

Alaska, the Northwest Territories and the Yukon for seeing the northern lights

Sparsely populated and still a wilderness even in modern terms, Alaska and the neighbouring Yukon and the Northwest Territories in Canada are an immense natural cinema for watching the northern lights. You travel here to wait expectantly under pitch-black night skies, far away from any light pollution that might lessen the effect.

The lodges are simple wooden properties with a small number of guests, which mix northern lights viewings with outdoor activities and great food. 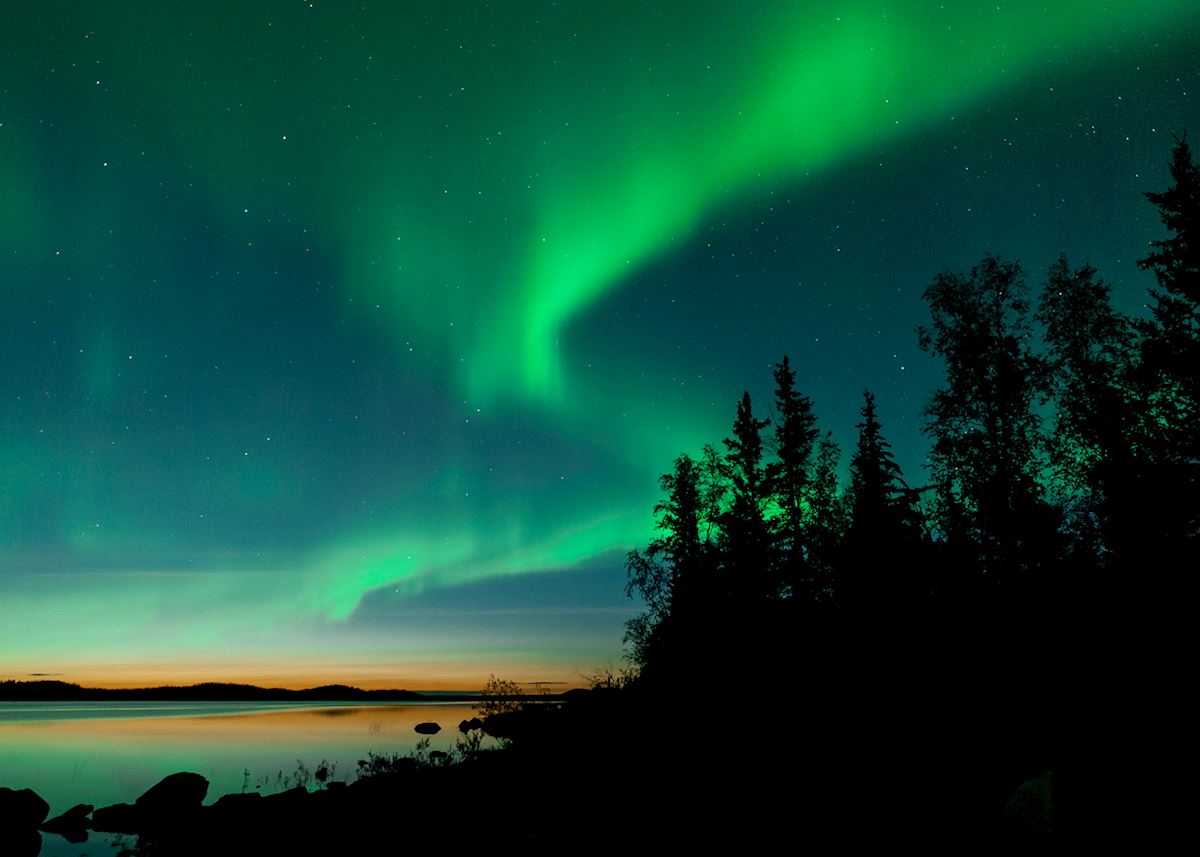 Set among forest in the Yukon, Boréale Ranch is still just half an hour from Whitehorse International Airport.

When I checked in, I was greeted with a pair of slippers, handmade by local First Nations people, to wear indoors throughout my stay. Days are spent snowshoeing through forests to the First Nations village of Carcross, fat-biking among mountainous landscapes and dog-sledding, where your guide will teach you the commands needed for mushing your pack of enthusiastic Alaskan huskies.

At night, you can sit out around the campfire, toasting marshmallows while your hosts recount the area’s history. Even if the lights don’t show, you’re given a radio to keep overnight to alert you if the northern lights are spotted.

I’d not long been in bed when my radio crackled to life. Everyone rushed outside to watch the vivid ribbons of light, forgetting the cold temperatures as we stood transfixed.

Western Canada for exploring the Rockies in the snow

In Canada’s west, the Rockies bask under crisp, blue skies and are enveloped in deep snow — winter here is all about experiencing the outdoors. Mile upon mile of trails run across the national parks, taking you into a remote backcountry where only your own movements break the silence.

The winter conditions transform the mountains, but they don’t make them inaccessible. Dog-sleds and snowmobiles are two of your main means of transport, and you can still explore on foot using snowshoes.

And, with the local knowledge of your guide, you can embark on ice walks through canyons and hikes along old trappers’ paths.

All this is paired with moments to sit back and take it all in, as you drink hot apple cider around a campfire or sink into the thermal waters at your spa retreat. 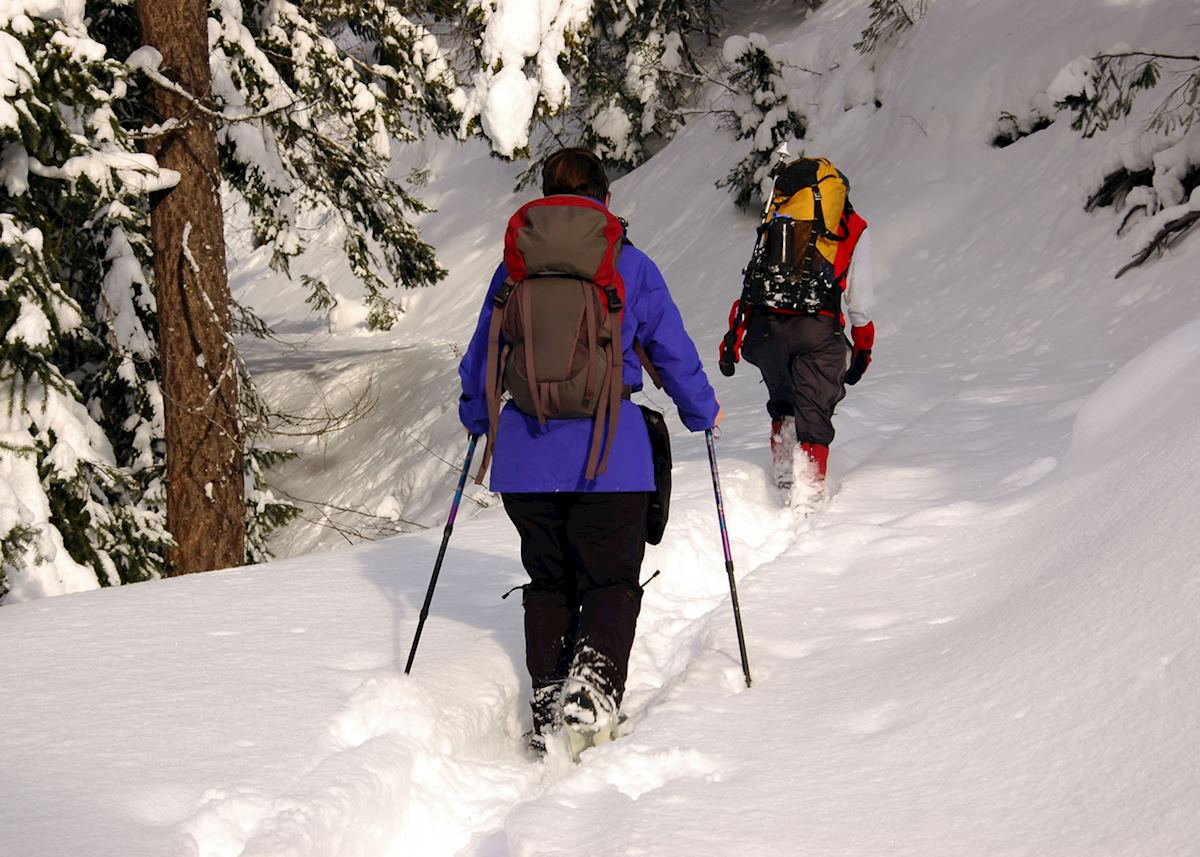 After donning your snowshoes, walking through deep snow immediately becomes a breeze and you’re able to focus on your surroundings: dazzling white mountains basking beneath a crisp blue sky. The silence is almost palpable.

My guide and I headed into a forest on the border of British Columbia and Alberta, right on the continental divide. 'At this point,' my guide George explained, 'water on one side of you flows to the North Pacific and on the other flows right across the country and out into the North Atlantic.'

The area was untouched, save for our oblong footprints and the occasional imprint left by a bird or small mammal.

We paused for a rest beside the frozen Altrude Lakes, and George made maple taffy. Heating maple syrup on his camp stove almost until it solidified, he then poured it straight onto the snow, stuck a stick into it and passed it to me to try. Warm, gooey, delicious.

As eastern Canada’s cities relax into Christmas, the streets quieten of visitors and residents get down to enjoying their winter pursuits. All the attractions stay open and you’ll find museums and galleries blissfully quiet.

It’s festival season, with ice sculpting at Ottawa’s Winterlude, and dancing in the streets during Québec City’s Carnaval. Ice skating is much-loved, and you can skate on the frozen-over Rideau Canal in Ottawa, the world’s largest (if only temporary) skating rink.

Beyond the cities, forest trails fan out from the resort of Mont-Tremblant, for you to explore by snowmobile or e-fat bike, a wide-tyred and electrically-assisted two-wheeler.

And, wilder still, you can reserve a day to travel far into Quebec’s hinterland and cut your footprints into virgin snow. 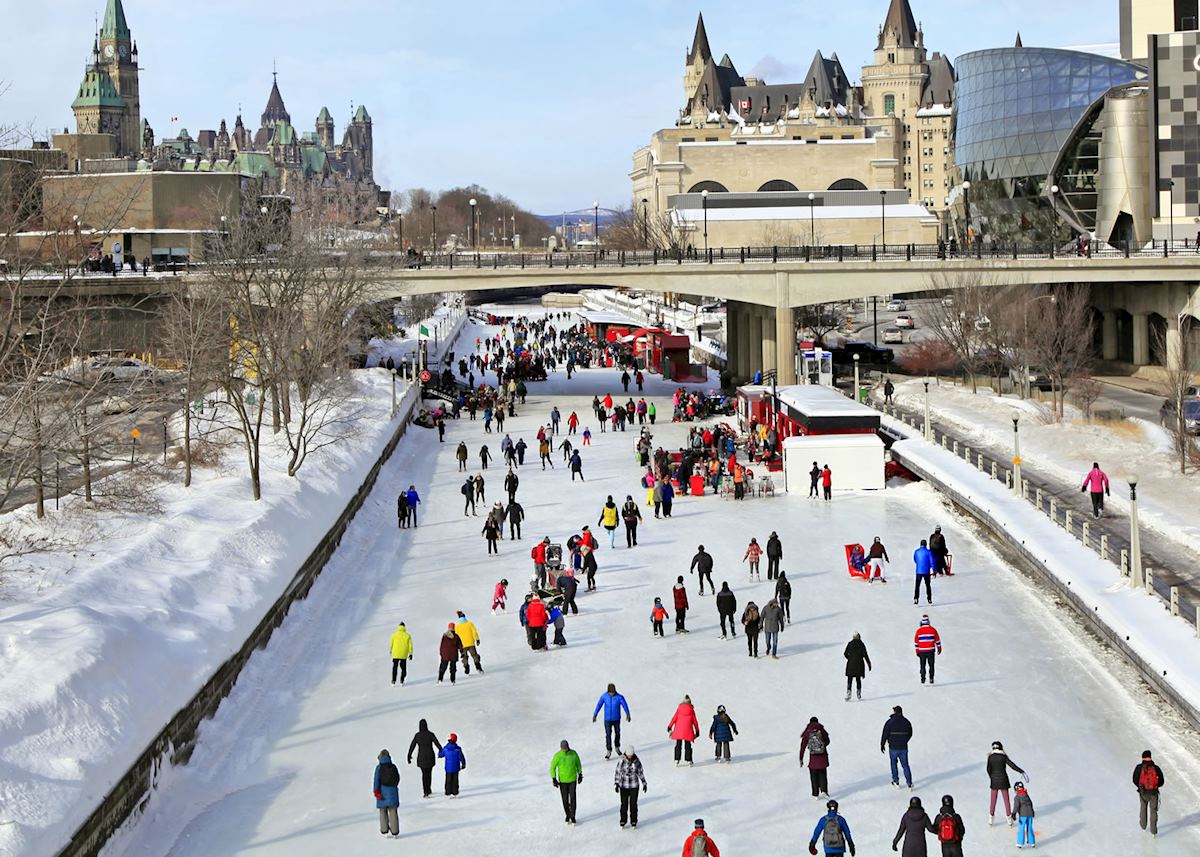 Ice skaters on the Rideau Canal in Ottawa

Ottawa’s Rideau Canal freezes solid throughout winter, and it’s free to glide across the 7.8 km (5 miles) waterway both during the day and at night, when it’s lit by festive lights, music plays, and steaming mugs of hot chocolate are at the ready.

I recommend pairing your time in Canada’s cities with a few days in the snow-blanketed Québecois countryside. The resort town of Mont-Tremblant offers snowmobiling and snowshoeing, but I joined an e-fat bike tour, following 10 km (6 miles) of forested trails.

You can adjust the bikes depending on how much electric assistance you want to kick in, from the gentle eco-setting where you do most of the pedalling to turbo mode, which is enough to power you uphill without you breaking a sweat. 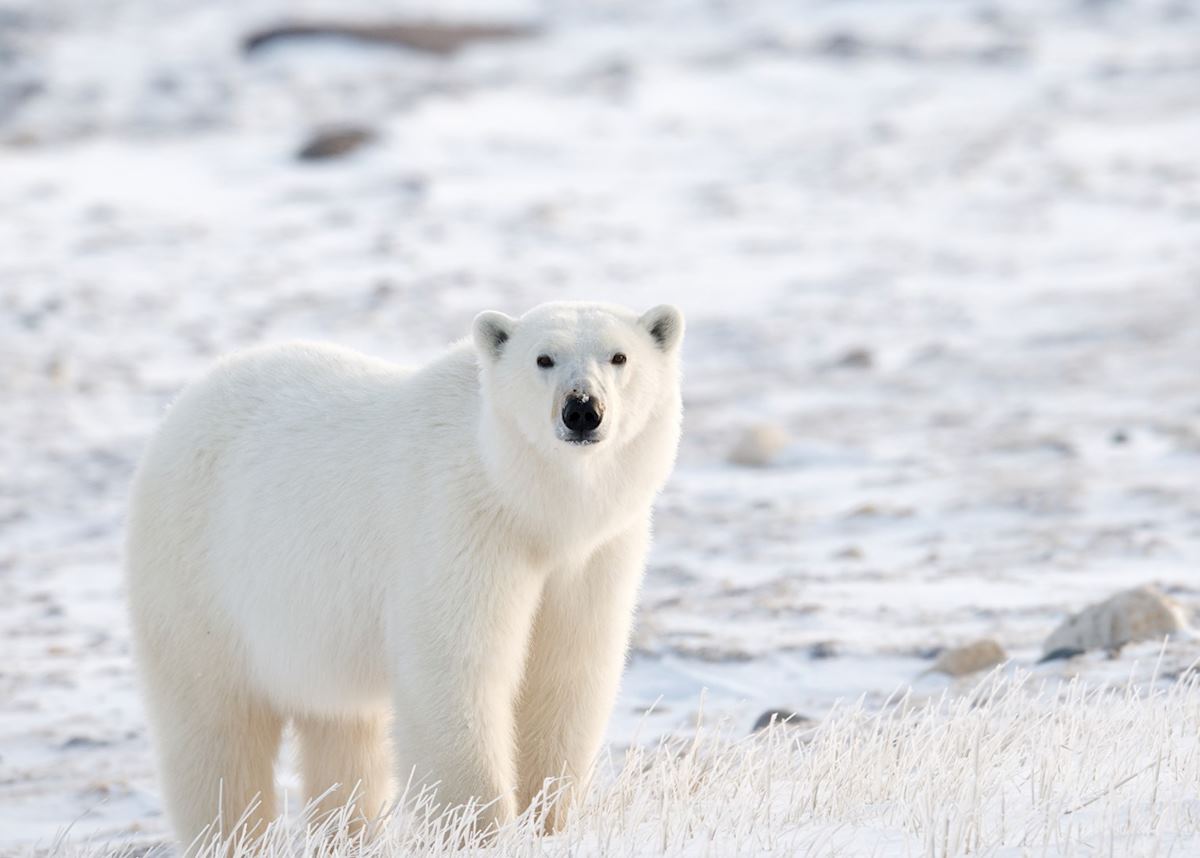 Canada in winter is also a launchpad to seeing the tour de force of Arctic wildlife, the polar bear. They gather in their scores on the edge of Hudson Bay, anticipating the big freeze that will enable them to step onto the ice and start hunting for ringed seals, their main food source.

As part of a small group, and guaranteed a window seat, you’ll follow the bears’ progress in a specially adapted tundra vehicle, led by an expert guide with a passion for the bears and their environment.

Mount Assiniboine in the Canadian Rockies

November gives you the best time to view polar bears, as they gather in their dozens on the edge of Hudson Bay to begin hunting. European-style Christmas markets are in full swing by the end of November, in cities like Toronto and Longueuil in Montréal.

In December, you can make the most of the Rockies at a much quieter time of year, staying in a log cabin or hotel with plenty of facilities to satisfy you when you’re not outdoors.

January to March is the best time to embrace a host of activities to accompany your stay, including dog-sledding, snowmobiling and helicopter rides to see the landscape thickly iced in snow.

Then, across all this time, you can watch for the northern lights under the unpolluted skies of Alaska, the Northwest Territories and the Yukon.

Polar bear watching in Canada Canada's Arctic, the Yukon & Prairie Provinces What to do in Alaska: our highlights guide
Get in touch