Embarking on a rail journey is an exciting and novel way to appreciate a region’s history, wildlife and natural beauty, whether you’re aboard a modern train with panoramic dome carriages, or a traditional 19th-century-style carriage.

Travel across Canada’s mountainous landscapes, dotted with glacier-fed lakes and historic rural towns, or venture into Alaska’s untamed wilderness to follow in the footsteps of those seeking fortune during the Klondike Gold Rush.

Toronto to Vancouver on the Canadian

The train company Via Rail runs throughout Canada, and ‘the Canadian’ train covers its popular Toronto-to-Vancouver route.

The journey demonstrates the variety of Canada’s landscapes. From Toronto to Winnipeg you’ll pass quiet lakes and dense forests, which thin out into flat farmland as you head towards Jasper. From there, you’ll travel through the heart of the Rockies. For this stretch, you pass huge snow-capped mountains set one in front of the other, thickset pine trees lining rock strewn rivers, and freshwater lakes with distinctive turquoise water.

We particularly recommend the Canadian’s Prestige class cabins. These have the feel of a small five-star hotel room, featuring a comfortable double bed, flatscreen TV, all meals and drinks as well as a butler service.

The next class down is Sleeper Plus, which includes a smaller berth or cabin for one to four guests. These have seating that can be converted into beds, and the cabins have en suite toilets.

During the day, you can spend time in the communal glass-roofed carriage, which has panoramic views of the mountains. The train’s interpretive guides will tell you more about the area you’re passing through, and the driver will make an announcement if any bears or other wildlife are sighted. Entertainment is provided on board, including wine tasting and musical performances.

The entire journey takes four nights and three days, covering a distance of 4,466 km (2,775 miles). If short on time, you can choose to travel just part of the route.

Montréal to Halifax on the Ocean

Via Rail’s ‘The Ocean’ runs for 1,346 km (836 miles) between Montréal in Québec and the port town of Halifax – Nova Scotia’s capital. En route, you pass through French-speaking Québec City, the province’s countryside dotted with wildflower meadows, rural towns and villages, and the scenic maritime province of New Brunswick.

While much of the 23-hour journey is inland, the train skirts the rugged coastline as you begin to approach Halifax, where the ocean is in close view from your picture window.

Between Montréal and Québec, the train runs along the Saint Lawrence River, while further north you’ll approach the Laurentian Mountains. Carpeted in forest, these differ to the bare peaks of the Rockies. During the fall (September to October) you can see the trees in their autumn cloaks as the leaves turn from green to orange and crimson.

The train’s large windows and glass-roofed dome carriage give you a good chance of spotting wildlife. You might see moose from your seat, their large antlers poking up from the vegetation. Black bears also roam the surrounding wilderness and you might spot them if you’re lucky. Deer quietly graze at the side of the track and eagles glide overhead as they search for food.

We recommend stopping off at Québec City. The oldest fortified city in North America, its historic heart resembles an old French village in its cobbled streets lined with cafes and bistros.

It’s also worth exploring the Moncton area in New Brunswick. Here, you can hire a car and visit towns around the Bay of Fundy, which experiences one of the highest tides in the world. It’s strange to see boats sitting in mud in the harbours, only to return a few hours later and notice how much higher the water has lifted them.

The Ocean offers Economy and Sleeper Plus classes. While the Economy class doesn’t offer private cabins, seats are comfortable with plenty of leg room, and you can buy blankets and pillows. Sleeper Plus-class carriages, meanwhile, have private cabins for one or two passengers, with sofas folding into bunk beds at night. You’ll also have your own toilet and closet, and some have private showers.

Sleeper-class guests also have priority reservations in the dining car and all refreshments are included in their journey. The standard of food is on par with a high-quality restaurant. You’re offered at least three meal choices, from fresh salmon to vegetarian dishes.

The train is used by Canadians for everyday travel, and you’ll meet fellow passengers over a drink in the two public lounges. Guitars are played, stories told and songs sung to pass the evenings.

Jasper to Prince Rupert on the Skeena

The Skeena train runs between Jasper in the Rocky Mountains and the small port city of Prince Rupert on British Columbia’s coast.

Part of the northern transcontinental line completed in 1914, this historic journey takes you through the wild and rugged Jasper National Park, with its glaciers, pristine lakes and towering peaks, past the dizzying heights of the Rockies and along the winding Skeena River. You have a good chance of spotting wildlife from your seat, including bears, moose, wolves, elk and eagles.

You’ll pass old sawmills, farms and remote settlements, where many of the residents rarely venture from the countryside. Some of the stops seem to be in the middle of nowhere, with no station and only a couple of people getting on and off the train.

On selected departures between June and September, Touring-class passengers have exclusive access to the train’s Panorama and Park cars, which have spacious lounges and large windows stretching to the ceiling so you can see the passing landscape from all angles.

Covering a distance of 1,160 km (721 miles), the journey takes two days, with an overnight stop in the small city of Prince George. We like to stay at Arbor B&B, which has a peaceful woodland setting and just two guest rooms, giving it a private, homely feel.

Running between White Horse in northwestern Canada and Skagway in southern Alaska, the White Pass & Yukon Route passes through the Yukon territory’s wild and remote landscape. It was built during the Klondike Gold Rush in 1898 by thousands of men who blasted their way through mountains to ease access to the gold mines, completing it in just over two years.

Today, you can take one-way or round-trip journeys along the railway aboard a steam or diesel train. You’ll pass mountains dappled with evergreens, deep gorges carved out by rivers and waterfalls spilling over rocks. Excitement mounts as you cross trestle bridges and enter dark tunnels cut into the rock.

The track winds its way along the sides of mountains, so you can look out and see the front of the train curving around the cliff edge. It makes you appreciate how much effort must have gone into building the railway at that time, and admire the sheer determination and perseverance of the gold miners who made the journey on foot before the track was built.

Another impressive aspect of the journey is the degree to which the train climbs, ascending around 900 m (3,000 ft) in just 32 km (20 miles) as the landscape changes around you, from spring flowers and swathes of tall trees to deep snow.

Despite being a popular attraction with visitors, this train ride still retains a nostalgic, historical feel that seems true to the route’s past. This is helped by small touches such as the old-fashioned printed guidebooks left on each seat, which detail what you can expect to see at certain points on the journey.

The carriages are very traditional in style, made of wood with large square windows and brass door handles. The helpfulness of the staff also stands out — they’ll talk about the history of the route and the area’s goldmining past throughout the journey.

Many of the original wooden rail bridges have been kept along the route. Now abandoned, they make for interesting viewing as you pass by their crumbling ruins, knowing that soon they’ll fall into the chasm below. 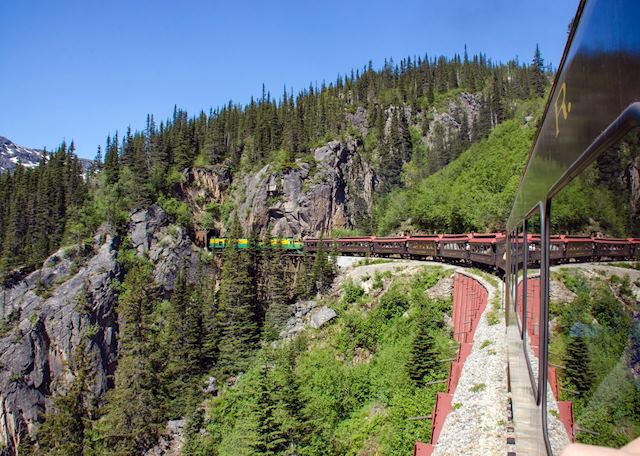