Canada’s French-language heartland is an intriguing mix of old-world Europe and nature on a North American scale with vast mountain ranges, rivers and lakes. Its flagship cities — Québec City and Montréal — are good places to start. Beyond them lie boreal forest, gently sloping valleys, one of the world’s longest natural waterways (the Saguenay Fjord) and the craggy Gaspé Peninsula. Here, mountain peaks plunge straight to the sea, and you’ll stop at villages where locals greet you in a rustic Québécois patois. Our Canada specialists have journeyed and researched their way around this largely overlooked region, and they’ll use this experience to create your own Québec trip. 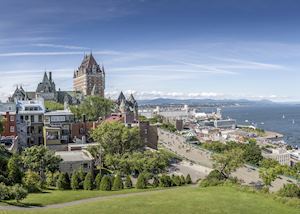 One of the great delights of touring Québec is discovering its Gallic-influenced gourmet produce. Our specialists can point you in the direction of artisanal cheeses, pâtés and chocolates in Charlevoix and La Malbaie. They’ll recommend the best walking tours for getting to know Québec City’s architecture, or the most rewarding walking trails in the forests and lakes of the Laurentian Mountains. You could look for moose in the mountainous Mastigouche Wildlife Reserve or beluga whales off Tadoussac. And, if you’re especially interested in the province’s European cultural heritage, you could explore the mansions and craft traditions of the Eastern Townships, whose inhabitants speak French but historically supported the British Crown.

Places to visit in Québec

Featuring heavily on our experiences of visiting Québec, these selected places are destinations that also prove consistently popular with our travellers. Our specialists can help you choose how to include them in your wider trip, based on your preferences.

Our itineraries will give you suggestions for what is possible when you travel in Québec, and they showcase routes we know work particularly well. Treat them as inspiration, because your trip will be created uniquely by one of our specialists.

Map view Places in and around Québec

Places in and around Québec

Our expert guides to exploring Québec

Written by our specialists from their own experiences of visiting Québec, these guides will help you make the most of your time there. We share both our practical recommendations and the best ways to appreciate Québec at its best.

We’ve selected a range of accommodation options for when you visit Québec. Our choices usually come recommended for their character, facilities and service or location. Our specialists always aim to suggest properties that match your preferences.