Unique in North America, Québec is the continent’s only walled city.

Built by the French during the 17th century, Québec was the backdrop for the Anglo-French wars that culminated in General Wolfe’s victory in 1759 and the expulsion of the French from Canada.

Now a UNESCO World Heritage Site, the narrow cobbled streets wind steeply between Basse-Ville and Haute-Ville, which is crowned by the magnificent Château Frontenac. The city is a treasure trove of historic sites, including the Vieux Port, Battlefields Park, the Citadelle, Artillery Park and the Place Royale. The Rue du Trésor is famous for its artists, whilst the Terrasse Dufferin affords magnificent river views. Military history comes alive on the Plains of Abraham while Québec’s ecclesiastical heritage is evident in its beautiful churches. 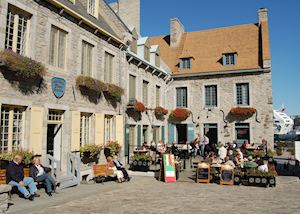 Filled with romantic restaurants and unusual boutiques, this is a city to explore through river cruises, horse-drawn carriage rides and walking tours. These leisurely guided walks are particularly good and will help you get your bearings in Canada’s Gallic heartland.

Written by our specialists from their own experiences of visiting Québec City, these guides will help you make the most of your time there. We share both our practical recommendations and the best ways to appreciate Québec City at its best.

We’ve selected a range of accommodation options for when you visit Québec City. Our choices usually come recommended for their character, facilities and service or location. Our specialists always aim to suggest properties that match your preferences.

Our specialists seek out authentic ways to get to know the places that could feature in your trip. These activities reflect some of the experiences they've most enjoyed while visiting Québec City, and which use the best local guides.