This is a city steeped in tradition which manifests itself in the magnificent Parliament buildings, the Governor-General’s residence and the many parks and gardens. 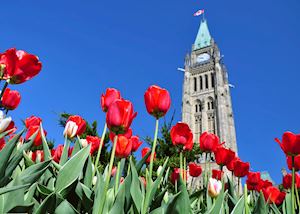 The Parliament buildings, in particular the Peace Tower and library, are well worth a visit, especially during mid-summer when the Changing of the Guards ceremonies take place.

Another principal attraction is the Rideau Canal which freezes over in winter to form the world’s largest ice-skating rink.

As capital, the city is home to the National Gallery of Canada, the Canadian War Museum and the Royal Canadian Mint. The Museum of Civilisation is particularly impressive, with its insights into First Nations culture.

Our itineraries will give you suggestions for what is possible when you travel in Ottawa, and they showcase routes we know work particularly well. Treat them as inspiration, because your trip will be created uniquely by one of our specialists.

Our expert guides to exploring Ottawa

Written by our specialists from their own experiences of visiting Ottawa, these guides will help you make the most of your time there. We share both our practical recommendations and the best ways to appreciate Ottawa at its best.

We’ve selected a range of accommodation options for when you visit Ottawa. Our choices usually come recommended for their character, facilities and service or location. Our specialists always aim to suggest properties that match your preferences.