Toronto is a multicultural metropolis par excellence. An unswervingly forward-looking city, its very essence lies in its diversity: its population includes 200 ethnicities speaking around 140 different languages. It’s a place of multiple districts, which sit nonchalantly cheek-by-jowl. If you take the tram down one street alone (Bathurst), you’ll pass Koreatown, Little Italy, Little Portugal, the self-proclaimed bohemian enclave of Kensington Market and the more moneyed but still self-consciously hip quarter of West Queen West.

The instantly identifiable needle and orb of the CN Tower (once the world’s tallest freestanding structure, until Dubai’s Burj Khalifa stole its thunder) lords it over the city’s skyline.

At its summit lie observation decks and a 360-degree revolving restaurant. The restaurant offers, arguably, a serener viewing experience of Toronto’s cityscape (a full rotation lasts 72 minutes), and all meals include admission to the observation decks.

You gain the best view of the tower’s exterior from the water. Short small-boat cruises of Toronto Harbour depart regularly and provide good views of the city’s other flagship buildings. 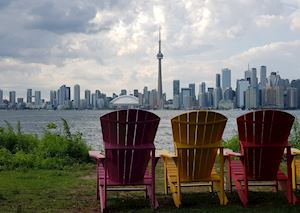 You’ll see the low, egg-like bulge of the Rogers Centre, the home stadium for the Toronto Blue Jays. Amid a spate of luxury condos lie older offerings, notably the industrial bulk of the Redpath Sugar Refinery (founded in 1854).

Here, you can take a cycling tour around the islands’ gardens, plush summer residences, bridges and bird-rich nature reserves. Even though Toronto isn’t a particularly frenetic-feeling city, the islands can still make for a pleasant escape from the downtown hubbub.

Away from the waterfront, almost slap-bang in the heart of the city and bordering Chinatown, stands Kensington Market. It’s less market as such, more a tight-knit community anchored around a grid of pedestrian-only streets with low-lying buildings. Here, anything goes.

It’s a rewarding place to explore (and even better when steered by a passionate local guide-cum-resident), full of flower-child whimsy and nonconformist spirit.

To the south of downtown, close to the waterfront, you’ll find a market in the more traditional sense. Like the fusion-food pioneers of Kensington Market it’s doing its bit to cement Toronto’s reputation as a gastronomic powerhouse. 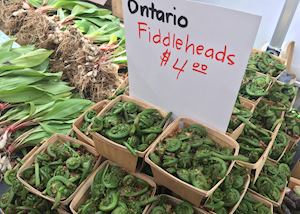 Continue east from St Lawrence Market and you come to the Distillery District. It preserves a 19th-century whiskey-distilling complex and other miscellaneous industrial buildings, transformed into a cluster of alfresco bars, boutiques, restaurants, galleries and performance spaces.

Torontonians have really taken the place to their heart. At weekends, the streets and patios are thronged with locals.

Looking farther afield, Toronto affords easy access to Niagara Falls. You can visit in a day or stay overnight.

You can visit Toronto year-round, but the city is probably at its finest between June and September. Be aware, though, that temperatures can soar in the summer, just as they plummet in winter.

Our itineraries will give you suggestions for what is possible when you travel in Toronto, and they showcase routes we know work particularly well. Treat them as inspiration, because your trip will be created uniquely by one of our specialists.

Our expert guides to exploring Toronto

Written by our specialists from their own experiences of visiting Toronto, these guides will help you make the most of your time there. We share both our practical recommendations and the best ways to appreciate Toronto at its best.

We’ve selected a range of accommodation options for when you visit Toronto. Our choices usually come recommended for their character, facilities and service or location. Our specialists always aim to suggest properties that match your preferences.