Known as the ‘shipwreck capital of Canada’, Tobermory lies between Ontario’s Georgian Bay and Fathom Five National Marine Park. Beneath these waters are the ghostly relics of 22 sunken ships. Many of which met their demise in the last two centuries, having struck one of the tiny islands or the hidden shoals peppering the shores. Seeing them in their watery grave from a glass-bottomed boat is just one way to spend your time in this tiny harbourside village. 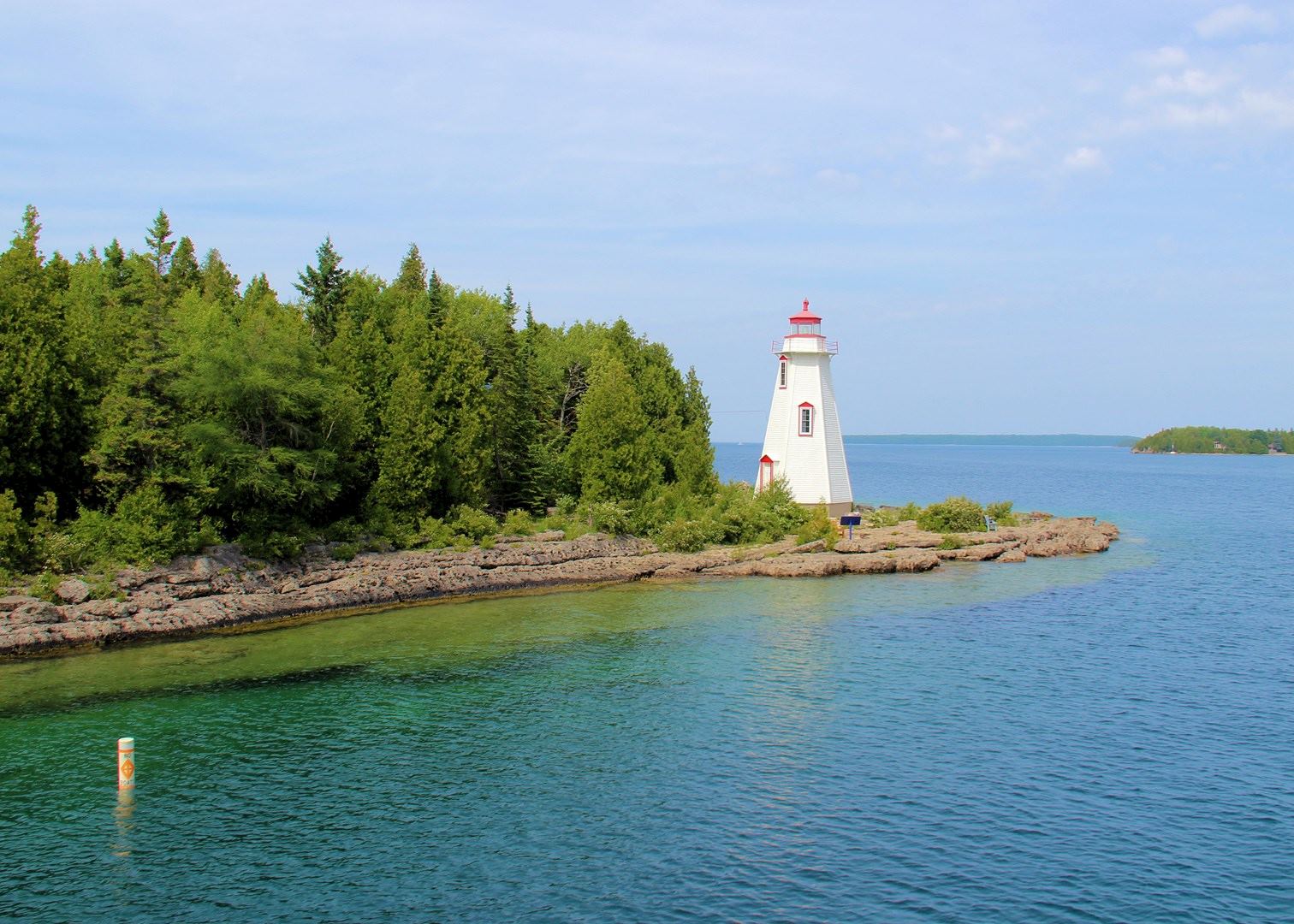 Tobermory is usually used as a gateway to the First Nations-influenced Manitoulin Island — you can catch the ferry over from its harbour. But, it’s also worth spending a bit of time getting to know the village, browsing its brightly painted shops, galleries and cafes, and perhaps enjoying an ice cream while taking in views over the water.

We also recommend heading into nearby Bruce Peninsula National Park to kayak along the shoreline or follow its walking trails. The Niagara Escarpment forms the backbone of the Bruce Peninsula, creating a mosaic of habitats for you to explore and earning the park’s status as a UNESCO World Biosphere Reserve.

You’ll find a network of walking routes that vary in length and scenery, from lakes, marshes and cedar forest to coastal viewpoints, coves, boulder-strewn beaches and sea caves that have been ground into the limestone rocks by the beating waves. Look out for wildlife such as chipmunks, white-tailed deer, racoons, skunks and porcupines as you walk.

Some of the routes link up to the 782-km (486-mile) Bruce Trail, giving you a chance to tread part of Canada’s oldest and longest public footpath.

Just off Tobermory’s shore is the Fathom Five National Marine Park. The park’s freshwater ecosystem supports diverse wildlife and plant life, including deer, bears and red squirrels, along with calypso orchids. The waves here have helped to sculpt ancient rock formations and limestone islands. The best-known is Flowerpot Island, where two sea stacks have been eroded into pot-like shapes.

And, like an underwater museum, the park’s clear waters provide a window onto the park’s 22 shipwrecks. The vessels have remained relatively well preserved compared to wrecks submerged in saltwater. 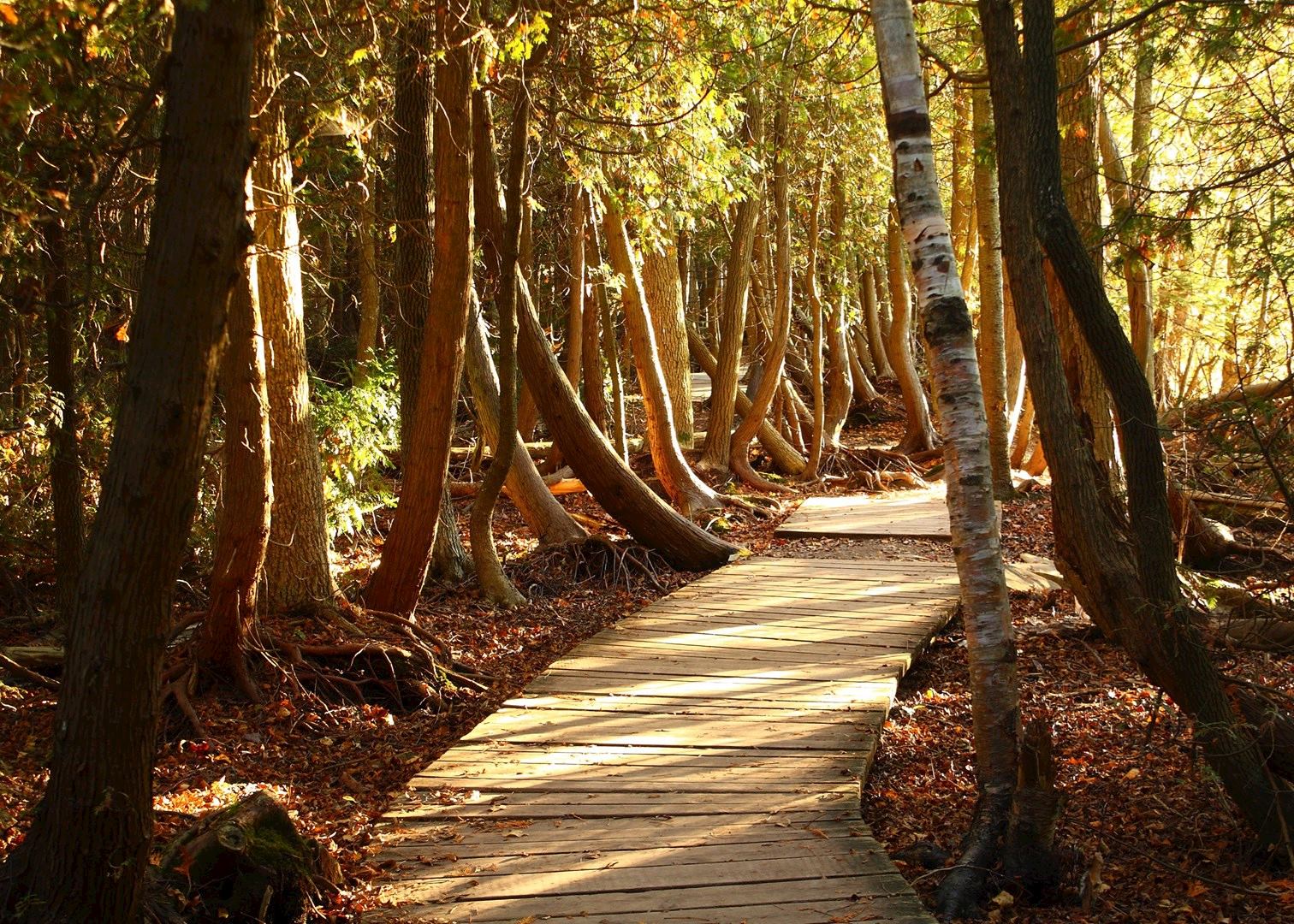 Board a glass-bottomed boat to see them in detail, as your guide tells you the history behind each one. While many sank due to the treacherous conditions, some were sunk deliberately when they were no longer seaworthy, creating a playground for scuba divers. If temperatures are warm enough, you could also see the shipwrecks by snorkeling above them.

During your stay on the Bruce Peninsula, you can visit some of the lighthouses that aimed to prevent these offshore disasters. Some are now replicas of the original structures, but still give you an idea of their importance.

One of the most striking is Big Tub Lighthouse. Its classic white-and-red wooden structure has stood at the entrance to both of Tobermory’s harbours since 1885, though it has been rebuilt and undergone renovation in recent years.

We also recommend visiting Cabot Head Lighthouse, set 24 m (80 ft) above Georgian Bay. The original lighthouse was built in the late 19th century, but it has since been rebuilt. You can visit the museum and walk along interpretive trails that tell you more about the lighthouse’s history. And, from its lofty position, you have sweeping views over the bay.

Visit between July and September, when you’ll experience the best weather and all attractions will be open. The ferry over to Manitoulin Island runs from early May to late October.

This sample itinerary will give you an idea of what is possible when you travel in Tobermory, and showcases routes we know work particularly well. Treat this as inspiration, because your trip will be created uniquely by one of our specialists. 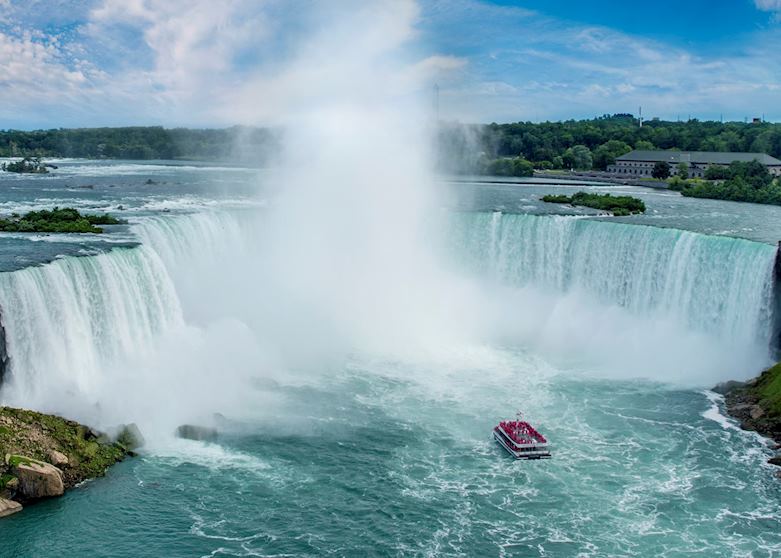 In addition to Ontario's famous highlights of Toronto and Niagara Falls, this itinerary allows visitors to depart the well-trodden tourist trail and venture into the province’s undiscovered interior; to experience its charming, historic towns, impressive scenery and rich cultural heritage. Beginning in Canada's largest city, Toronto, take in the might of Niagara Falls, before travelling through the heart of rural Ontario through the lovely Muskoka region. Take in the magnificent Killarney Provincial Park and the First Nations culture of Manitoulin Island, before completing your trip on the picturesque Bruce Peninsula on the shores of Lake Huron.