Every minute, enough water to fill 70 Olympic-size swimming pools plunges over the sheer cliffs that form Niagara Falls. It crashes into the rock-strewn water below with a roar that you can hear for miles, its colossal force creating clouds of mist that rise high into the sky.

Straddling the US-Canadian border, Niagara comprises three falls: Horseshoe Falls, American Falls and Bridal Veil Falls. While the latter two are on the US side, Canada is home to the largest of the three, with 90% of the Niagara River flowing over Horseshoe Falls. You can get close to this frothing white sheet of water by joining a boat cruise to the foot of the falls. Or, for a view over the entire waterfall system, take to the skies for a brief but exhilarating helicopter ride.

As soon as you arrive at Niagara Falls, you’re drawn to the power and noise of the cascading water. Joining a Hornblower boat cruise, you can venture right up to the foot of Horseshoe Falls, passing Bridal Veil Falls and American Falls along the way.

Red waterproof ponchos are given out, as you get close enough to feel the waterfall’s spray. The water around you churns and froths, and the sound of the falls thunders in your ears. The boat completes a full rotation so everyone gets an equally good view of the falls, with the whole experience lasting 20 minutes.

Alternatively, you have the option to join a 40-minute cruise at night, when the falls are illuminated in a rainbow of lights and fireworks burst overhead. 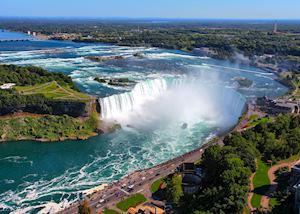 For an all-encompassing aerial perspective over the falls and the Niagara River, you can board a helicopter for a ten-minute flight above the rising spray. As you ascend into the sky, you can see the entire semi-circular shape of Horseshoe Falls unobscured by mist. If the sun’s out, you might see rainbows bouncing off the water. Your pilot will point out features of the site, including the Whirlpool Rapids, Rainbow Bridge, and the two smaller falls that also make up Niagara.

More bird’s-eye views can be enjoyed from the Skylon Tower, whose revolving restaurant and indoor and outdoor observation decks rise 236 m (775 ft) from the edge of the falls.

Opened in 1965, the tower overlooks Horseshoe Falls and American Falls. On a clear day, you might also see the distant skyline of Toronto and the surrounding vineyards that make up the Niagara wine district.

Inside, there are two restaurants, shops, entertainments such as glass-blowing demonstrations, and a 3D/4D movie screen showing a film about Niagara Falls and its history.

You can learn more about the town of Niagara Falls at the Niagara Falls History Museum. Here, exhibitions paint a picture of the local community, the area’s geology, and key events that have happened here over the years.

The Battle of Lundy’s Lane took place just a short walk away from where the museum now stands. It was part of the War of 1812, fought between the US and the UK. Visitors can try on a replica of the uniform worn by soldiers at the time, hold a musket and see relics and archival records related to the battle.

Within the museum, you can also attempt to cross a tightrope walk — a nod to the individuals who’ve attempted stunts around the falls. Such daringness included walking along a tightrope across the falls, and plunging over the edge of the falls in nothing but a barrel.

You can learn more about these foolhardy feats at the Niagara Daredevil Exhibit in the Niagara IMAX Theatre. Here, some of the simple vessels used by the thrill seekers in their attempts to survive the plunge are on display. You can read about each daredevil’s endeavours, some of which had fatal consequences.

A film showing at the IMAX gives you a taste of how the stunts would have felt, as well as recounting the 12,000-year history of the falls.

Our itineraries will give you suggestions for what is possible when you travel in Niagara Falls, and they showcase routes we know work particularly well. Treat them as inspiration, because your trip will be created uniquely by one of our specialists.

Written by our specialists from their own experiences of visiting Niagara Falls, these guides will help you make the most of your time there. We share both our practical recommendations and the best ways to appreciate Niagara Falls at its best.

We’ve selected a range of accommodation options for when you visit Niagara Falls. Our choices usually come recommended for their character, facilities and service or location. Our specialists always aim to suggest properties that match your preferences.