Brisbane (affectionately called ‘Brissie’) is the kind of clean, ultra-modern, comfortably multicultural, water-wrapped city that Australia does so well. But, compared with Sydney, Melbourne, and even Perth, it keeps a low profile. Beyond the CBD (central business district), an agglomeration of gleaming glass-and-steel high-rises, you’ll find parkland, public pools and many outdoor craft and street-food markets (the Asian dishes are particularly exemplary). To the east, the city reaches out to a string of beaches. Meanwhile, a hemline of rounded hills, the Taylor Range, offer lookout points across the CBD and over to Moreton Bay.

Brisbane’s spiritual heart is Anzac Square. The palm-and-bottle-tree-filled garden at its heart commemorates Anzac soldiers who fought in World War I, and it hosts ceremonies annually on Anzac Day. The rest of the year, you’re more likely to find office workers quietly lunching on its lawns. 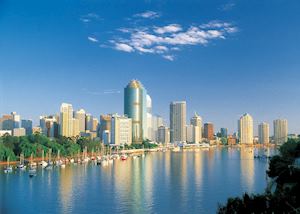 Townish in feel, Brisbane is traversed by its looping eponymous river, which acts as one of the city’s main hubs. Kayakers glide past leafy banks lined with fig trees and open-air cafés. CityCat ferries ply this sparkling waterway, functioning as both public transport and pleasure craft, and they’re by far the best way to get around.

It’s particularly pleasant to walk along the river’s South Bank area — past a slew of handicraft stalls on Fridays and weekends — to QAGOMA (Queensland Art Gallery & Gallery of Modern Art). It’s a series of interconnected buildings designed partly to imitate a lightbox, and it has the feel of one big, arty campus (even the public bathrooms come with light installations).

You can easily reach Brisbane Botanic Gardens via the South Bank. It contains a variety of green spaces: scallop-edged Japanese gardens, a bamboo grove, a cactus house, and Queensland’s own micro subtropical rainforest. The lake-dotted gardens are rich in waterbirds, including herons and plovers.

Just off Brisbane’s coast, a ferry ride away, lies Saint Helena Island in Moreton Bay. Once used as a penal colony, its name allegedly comes from an axe-thieving and resourceful Aboriginal known as ‘Napoleon’ (unlike his namesake, he escaped his island exile in a canoe). It’s now a national park with regenerating dry forest and girded by mangroves. Many wading birds migrate here for the Australian summer, and dolphins and turtles frequent the island waters.

You can visit Brisbane year-round. Due to its position on Australia’s Sunshine Coast, the city has a subtropical climate and enjoys pretty-much permanent sunshine (on average, at least 300 days a year). The temperature usually stays a steady 20 to 25°C (68 to 77°F), although the summer months (late November to early March) can be especially humid.

Our itineraries will give you suggestions for what is possible when you travel in Brisbane, and they showcase routes we know work particularly well. Treat them as inspiration, because your trip will be created uniquely by one of our specialists.

We’ve selected a range of accommodation options for when you visit Brisbane. Our choices usually come recommended for their character, facilities and service or location. Our specialists always aim to suggest properties that match your preferences. 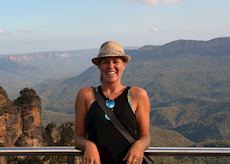