Dr David Coleman recently traveled with Audley to Australia's Heron Island to paint and experience its incredible sights and wildlife.

I have spent the last two or three weeks working on my sketch books back home in my studio in England. For much of this time I have been re-constructing aspects of our visit to Heron Island on the Great Barrier Reef. Quick sketches, and where possible more detailed drawings, a water color box, plus video footage; and years of learning to train one's visual memory go into the reconstruction of the experience of a lifetime. The process of consolidating the most beautiful things we experience is, for me, a very profound part of life.

Heron Island is a tiny coral cay about 75 kilometers offshore. It lies right on the Tropic of Capricorn. We had absolutely no idea what to expect, except for the absolute delight of being in brilliant sunshine. This was, for us, a venture into the unknown. Once we were out of Gladstone Harbour and surrounded by deep azure ocean we were soon powering up for a high speed journey. We didn't expect to be racing into a 30 knot headwind, however, so it was a very bumpy crossing. All of a sudden we regretted packing the seasick pills in the bottom of the suitcase! We learned as we got off the boat at the other end that it would have been wise to stay at the rear end of the boat rather than be overtaken with my boyish desire to sit at the front. 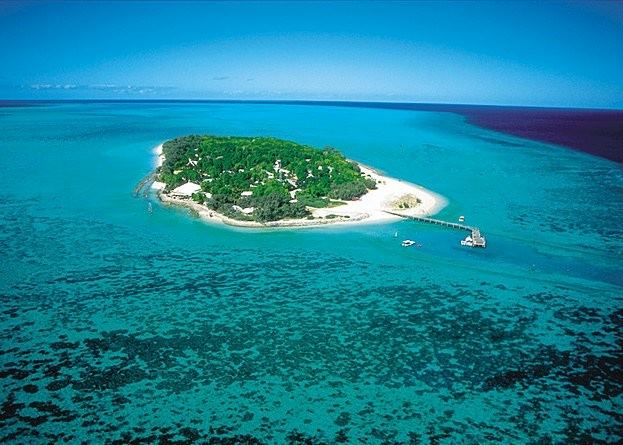 About an hour out the sea appeared to be split by huge pale orange lines as we started to enter the channels between the reefs. At low tide they are very near to the surface, and even where we were, at the southern edge of the Barrier Reef, 'Great' was beginning to come home to us. They are enormous. How must Captain Cook have felt as he ventured into these channels in an oak ship that was difficult to maneuver and thousands of miles from any sort of help if the wind turned ferocious?

Onwards we pressed, until tiny Heron Island appeared in view. Soon the channel was narrowing and the boat slowed. The wind dropped, and suddenly the silence enveloped us and we became aware of much smaller sounds, like the cries of thousands of Noddy Terns and the rush of water off the reef as the tide receded, and the dazzling flickering light as the orange streaks became but elements of a cascade of flickering light reflecting off a maze of reef shapes of cinematic brilliance.

The island is about a kilometer long and is surrounded by a lagoon, and set in the middle of a huge reef. A second adjacent reef is separated from it by a deep water channel, so 2-300 people on the island (quite surprisingly) doesn't make it feel crowded. 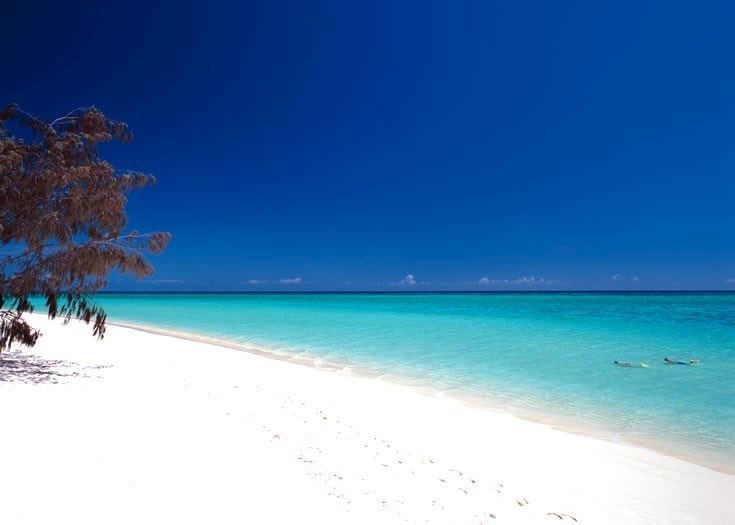 The island is covered by ocean birds that visit during the nesting season. Quite a lot of the island is made subtly inaccessible to preserve its important nest sites. The reefs are a fabulous ecosystem, and preservation of them is a top priority in this World Heritage Site. Part of the challenge of preserving them is to permit sufficient access for people to enjoy and value them whilst not actually doing too much damage. This ecosystem is very fragile; but with expert management it has been made available for all reasonably mobile people to see. It is possible to walk out into the surrounding coral garden at low tide as the corals appear like crazy paving with sandy runnels between the plates. The density of these plates grows as one walks slowly up to a mile out to the deep water channel where the coral starts to shelve off steeply. The coral garden is absolutely full of amazing delights. They are not all easy to see as wild animals survive using expert camouflage. A simple guide book that points out the major species would be very useful. Some of them are potentially very dangerous too, so the warnings not to touch need to be heeded. A pair of wet boots and decent sandals is essential as the coral is mighty uncomfortable underfoot. Guided tours are available daily so one can learn what it is safe to do, and one is introduced to the animals by an experienced marine biologist.

At high tide, a whole set of new and amazing experiences are available. By now the lagoon is about three meters deep and laps the shore of the resort. Looking down into the water, particularly with polarizing sunglasses, stingrays, turtles and the occasional reef sharks soon become apparent. Soon, large shoals of other fish can also be seen passing through. With a snorkel and a face mask even the least experienced of us can safely see large and brilliantly colored fish a few meters from the shore that appear close enough to touch. A pair of flippers can be hired for about £3 per day and a decent face mask purchased for about £30. For the more able, boat trips out to the edges of the reef are available though the opportunities are limited, and spaces are booked up quickly. Some days these excursions are canceled at the last minute because of high winds. There is also a contingent of divers who come equipped to venture much deeper and who tend to rush to book the slots as soon as they arrive. We were very happy snorkeling offshore. There is a Grouper called Gus who is about two meters long who is frequently seen near the ferry pontoon, though this area is out of bounds for snorkelers 'till 5.00pm. 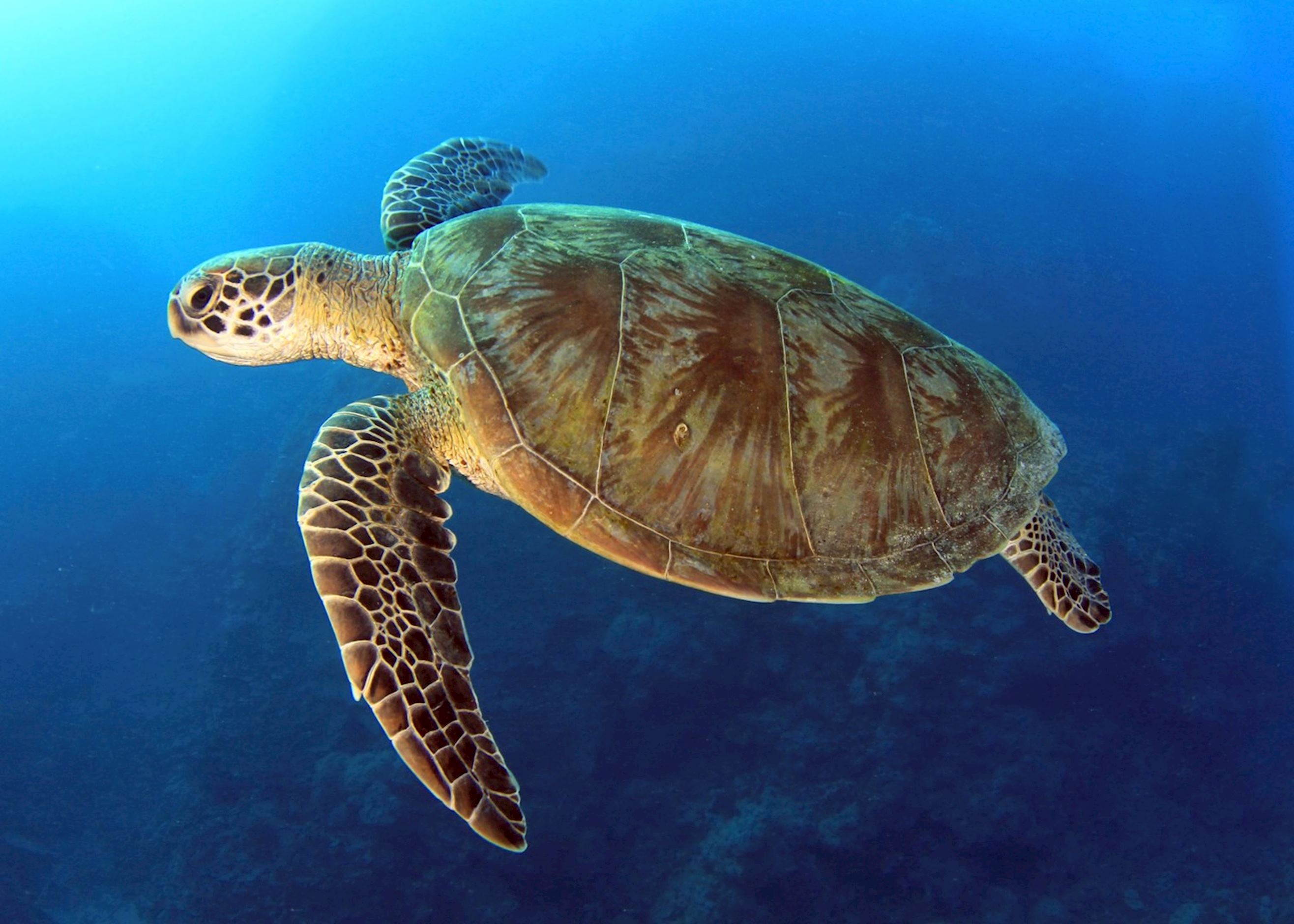 It is possible to see them come in after dark if there is enough moonlight but beware, there is little or no light pollution so you will see the Milky Way in a way reminiscent of Hubble Space Telescope photos, but won't see a foot in front of you. And using an artificial light is not recommended. The light confuses the turtles and the managers of the resort take a very tough line with people who think this advice can be ignored.