Our specialists choose a selection of unique experiences that allow you to see India's cities in a new light.

For me, no visit to Calcutta is complete without a guided walking tour of the city. Starting outside Howrah Station, watch the throngs of commuters streaming across the Howrah Bridge into Calcutta. As you reach the other side, look down to the flower market where millions of flowers are delivered and sold each day. You’ll also visit Kumartulli, the potter’s district, where artists craft clay idols for Hindu festivals as well as tiny clay teacups. Calcutta is the only place in India where masala tea is still drunk from clay cups, which are then discarded, and the clay recycled back into the river.

Udaipur is fondly known as the ‘City of Lakes’, but many only see Lake Pichola during their stay, missing out on much of what makes the city special. To get a more in-depth look, I got up early to begin a 20 km (12.4 miles) cycle that took in some of the other beautiful lakes. Cycling through local villages within the foothills of the Araveli range was hard work at times, but stopping for breakfast by the side of Tiger Lake was a magical way to start the day. If the distance is a bit of a challenge, you can also cycle within the old city, visiting local markets and temples as the city wakes up.

Arriving at the brightly painted Meenakshi Temple one evening, I was met with the smell of incense. I didn’t know what to expect as I waited in the temple, with hundreds of people praying around me. A large gong sounded, reverberating round the temple galleries and immediately several priests started chanting and stomping to music. They carried the image of the Hindu god Shiva towards the chamber of a statue of Parvati, his consort, where he spends each night. The ceremony happens around 9:30pm each evening.

India holds many animals sacred, cows in particular, but the last thing I expected to find in Jaisalmer was a pool of holy catfish. Gadisar Lake is on the outskirts of the city and surrounded by temples and shrines. Each morning, locals congregate at the lakeside to feed the catfish and, for a few rupees, you’re welcome to join in. There are so many fish that the water becomes a writhing mass of whiskered gray bodies fighting for crusts. Catfish are thought to be an incarnation of the Hindu god Vishnu and locals believe that feeding them brings good luck.

The setting for Jamal and Latika's closing dance in Slumdog Millionaire. Victoria Terminus is almost a serene experience once rush hour is over. Joining my guide, we explored the station’s mix of modern and colonial architecture. A traditional bus and a black-and-yellow cab then took us to Chor Bazaar. It’s the place to come for a bewildering array of old car parts, dusty shop mannequins, ancient gramophones and pre-loved shoes. Our own dhaba wallah (lunchbox distributor) delivered lunch in the park, each served in a personal tiffin box.

Year after year I'm drawn back to India by its spiritual side. I’ll always remember the gentle climb I took through pine trees in the lower foothills of the Himalaya, which opened out to the Kunjapuri Temple and views of the snow-capped peaks in the distance. Arriving in time to witness the sunrise, my guide and I rang the temple bells to let the gods know we were there. We were greeted by the scent of incense as a priest guided us through a blessing. I left with an offering of flowers and candles in hand, which I later floated down the Ganges as part of the evening Aarti ceremony in Rishikesh. 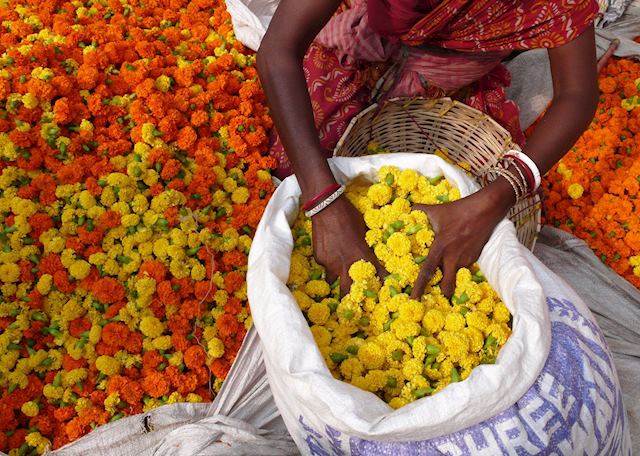