The top 7 experiences in Borneo

Borneo is well-known for its orangutans, and rightly so. But, there’s a lot more to this jungle-covered island. Borneo specialist Sophie has picked her top seven experiences, including the best way to catch a glimpse of these popular primates, as well as more off-beat experiences in the depths of the equatorial jungle.

1. Orangutans in their natural habitat

There’s a variety of places to see orangutans in Malaysian Borneo depending on your style of travel (and patience). While you're never guaranteed to set your eyes on one, your best bet is in Sepilok Orangutan Rehabilitation Centre in the northeastern state of Sabah.

A portion of the jungle here has been set aside to rehabilitate rescued adults and youngsters, which are taught survival skills before being released into nearby national parks. There’s a video and exhibition worth lingering over, but the highlight is seeing the orangutans in the jungle, the click of cicadas in the background, as they sweep through the trees foraging for food.

You can attend the morning and afternoon feeding sessions, which can get quite busy (with humans), so I suggest staying once these have finished to explore the surrounding boardwalks. I did this and, on turning a corner, saw a mother and baby cross a branch nearby, no-one else in sight.

2. Wildlife along the Kinabatangan River

While orangutans have become the leading stars of Borneo wildlife, they have a strong supporting cast. One of the best ways to see a broad range of animals is to take a riverboat trip along the Kinabatangan River, not far from Sepilok.

The riverbanks are common napping spots for bulbous-nosed proboscis monkeys and the rhinoceros hornbill, with its almost fluorescent yellow bill. Look out for the serrated spine of a crocodile sticking out of the water, or a tiny kingfisher tucked into the bough of a tree. If you’re lucky, you might also see pygmy elephants coming to drink.

The people of Sabah, Borneo’s southeastern state, are so proud of Mount Kinabalu that a silhouette of its spiky peak is on its flag. The island’s highest peak at 4,095 m (13,452 ft), getting to its rocky summit is one of Borneo’s great trekking opportunities.

Your first day is a steep climb through the rainforest, where you’ll see carnivorous pitcher plants dangling from the trees. As you broach the treeline, you’ll reach basecamp for dinner and an early night. The next morning, it’s a 2am start to aim for the summit in time for sunrise.

This is an adventurous climb and you need a good degree of fitness (you’ll need to haul yourself up by a rope at some points), but it’s worth it. Standing on the summit, above a layer of cloud, is akin to treading on a lunar landscape, except you’ll see the twinkle of headlamps from other trekkers trailing down the mountain behind you.

Borneo tends to draw in would-be naturalists and the adventurous, but for something different, Kuching has a range of street food to rival any other Southeast Asian city. Once an important stop between Southeast Asia and China, the city has a strong mix of British-colonial, Malay and Chinese influences, as well as Iban, the ethnic group indigenous to this region.

This fusion can be seen across its cuisine, from cucur udang, a Chinese-inspired prawn fritter, to tandoori-spiced kebabs grilled over hot coals. Take a tour with a local guide to find the best places to eat, including the Song Kheng Hai Hawker Centre, which is hidden on the top of a car park.

And if that isn’t enough, you can take a cooking class with a local family who’ll introduce you to the art of Malaysian home-cooking. Starting with a visit to a fresh produce market, you’ll soon be chopping, peeling and frying before sitting down with the family to sample your creations.

5. An overnight stay in a traditional longhouse

The Iban people of Borneo became infamous for headhunting when foreign adventurers first explored the island. While this custom is no longer practised, the Iban still maintain their culture and traditions along a remote stretch of river (accessible from Kuching).

Borneo has plenty of comfortable hotels, but for one night, I suggest sleeping on a mattress on the floor. The Iban welcome visitors to spend the night in their longhouse, a stilted wooden building on the riverbank.

While the facilities may be basic, the hospitality is worth it. You’ll eat with the rest of the village around a communal fire, before being encouraged to join in with an evening of dancing and singing. In the morning, you’re likely to wake to the sound of chickens and children playing, while breakfast is cooked in bamboo tubes over the fire.

6. The biodiverse rainforests of Danum Valley

The rainforests of Danum Valley are so biodiverse that, on average, a new species of plant is found every week. This is thanks to its protected conservation status and remote location two-hours’ drive from the nearest town of Lahad Datu.

The only place to stay is the Borneo Rainforest Lodge, a collection of comfortable stilted chalets built along the riverside. You’ll wake to the chatter of gibbons and have the occasional bird perch on your balcony. I was lucky enough to watch an orangutan swing across a nearby boardwalk one afternoon.

From the lodge, a series of tree-top walkways takes you high into the tree canopy. Below you, a lattice of hiking trails spreads out deep into the primary forest. Due to the jungle being almost impenetrable in places, wildlife can be tricky to spot, but the lodge has a team of skilled naturalists to help.

7. A secluded escape on Gaya Island

Borneo may not be top of the list of Asia’s most-esteemed beach destinations, but therein lies its secret. Take a short speedboat ride from Kota Kinabalu, on Borneo’s northern coast, and you’ll arrive at a golden sweep of sand sandwiched between thick rainforest and turquoise ocean.

As the boat nears, you’ll begin to pick out the tiered roofs and low-rise pavilions of Gaya Island Resort amidst the greenery. Only reachable by boat, the resort is on the largest island of Tuku Abdul Rahman Marine Park and makes for a relaxing finish to a busy trip across Borneo.

You can snorkel right from the beach, where rainbow runners and glittering shoals of silverfish flit amongst the coral. I opted to hire a kayak and paddle through the mangroves, where you can spot crabs scuttling up the branches.

And, if you haven’t seen enough Bornean wildlife, the resident naturalist runs daily nature walks around the island, seeking out the island’s troop of proboscis monkeys and breeding pairs of rhinoceros hornbills.

Read more about trips to Borneo 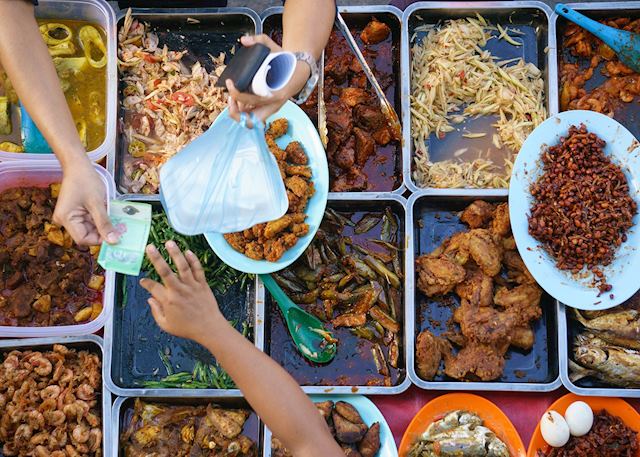