You could spend one night in a secluded jungle lodge, rising to the chatter of monkeys, and the next wake to the sound of the sea on a boutique island resort, ready for a day of snorkeling in some of the best dive spots in the world.

Borneo’s thickset rainforest is the only place where you can see orangutan in the wild other than the neighboring island of Sumatra. But spotting them is tricky and they’re usually at a distance.

The sanctuary is a rehabilitation center for orangutan that have been rescued after being orphaned or injured. Here, they’re fed and cared for before reintroduction to the wild.

There’s a choice of lodges by the river to base yourselves, but my favorite is a little place called Abai Jungle Lodge. It’s not the most comfortable, but it gives the strongest feel of ‘being out there’. For one, the only way to arrive is by boat, which adds to the sense of romance. 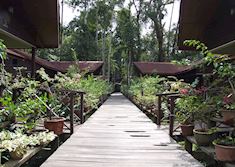 The three kilometer trek to Coffin Cliff — so named because coffins of the local tribe’s ancestors lie on ledges on the vertical stone face — brings you to a cascading waterfall under which you can cool off before heading back to the lodge. 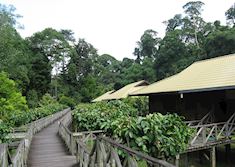 For a more unusual honeymoon getaway in Borneo, I’d suggest traveling two hours by road from Kuching to spend a couple of nights in the Damai Peninsula at the Permai Rainforest Resort.

The accommodation is stilted treehouses, about six meters up in the canopy of the rainforest, so when you wake it’s to the noise of the jungle.

A two-night stay will probably suffice, but you can take a boat trip out to nearby Satang — a tropical island and turtle conservation area — for snorkeling and relaxing on the fine white sand.

The coastal national park of Tanjung Datu at the southern tip of Sarawak is so secluded that you can only reach it by boat. For four months of monsoon season it’s completely cut off. Very few travelers make it to this remote outreach.

After an active trip, four or five nights at the luxurious Bunga Raya Island Resort on Gaya Island makes for a peaceful and romantic end to your honeymoon in Borneo. The resort’s wooden villas are set into rainforest on the edge of my favorite beach in Borneo, a crescent bay of sand lipped by clear water that's wonderful for snorkeling. The overriding feeling is 'Robinson Crusoe' with a touch of luxury.

On the same island is Gaya Island Resort — another wonderful hotel, which while slightly larger has more facilities, including a good choice of restaurants and a wonderful spa. This is a good choice for those who are still hoping to stay active, with trekking, snorkeling, diving and sunset cruises all available. 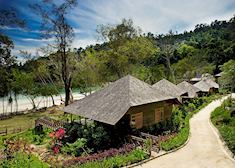 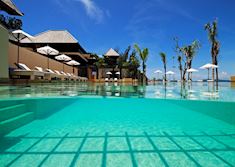 The best weather is from March until the end of September as it should be drier, though it is worth bearing in mind that most of the island is covered by rainforest. Traveling outside July and August is a good idea for honeymoons — there won’t be as many families and children, and you may be able to take advantage of hotel offers.